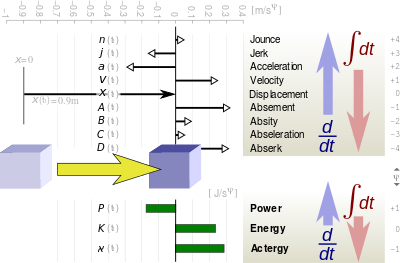 In kinematics, absement (or absition) is a measure of sustained displacement of an object from its initial position, i.e. a measure of how far away and for how long. Absement changes as an object remains displaced and stays constant as the object resides at the initial position. It is the first time-integral of the displacement[1][2] (the area under a displacement vs. time graph), so the displacement is the rate of change (first time-derivative) of the absement. The dimension of absement is length multiplied by time. Its SI unit is meter second (m·s), which corresponds to an object having been displaced by 1 meter for 1 second. This is not to be confused with a meter per second (m/s), a unit of velocity, the time-derivative of position.

For example, opening the gate of a gate valve (of rectangular cross section) by 1 mm for 10 seconds yields the same absement of 10 mm·s as opening it by 5 mm for 2 seconds. The amount of water having flown through it is linearly proportional to the absement of the gate, so it is also the same in both cases.[3]

Fluid flow in a throttle:

PID controllers are controllers that work on a signal that is proportional to a physical quantity (e.g. displacement, proportional to position) and its integral(s) and derivative(s), thusly defining PID in the context of Integrals and Derivatives of a position of a control element in the Bratland sense[9]

Recent work in mechanics and memristors and memcapacitors further builds on the concept of absement, and assigns it the letter "a",[10] and makes extensive use of plots such as the graph of absement as a function of displacement:

Strain absement is the time-integral of strain, and is used extensively in mechanical systems [Pei etal 2015] and memsprings: