Meudon (French pronunciation: ​[mø.dɔ̃]) is a municipality in the southwestern suburbs of Paris, France. It is in the département of Hauts-de-Seine. It is located 9.1 km (5.7 mi) from the center of Paris.

The town of Meudon is built on the hills and valleys of the Seine. The wood of Meudon lies for the most part to the west of the town. The northwest part of Meudon, overlooking the Seine, is known as Bellevue ("beautiful view").

At Meudon, the argile plastique clay was extensively mined in the 19th century. The first fossil of the European diatryma Gastornis parisiensis was discovered in these deposits by Gaston Planté.

Archaeological sites show that Meudon has been populated since Neolithic times.

The Gauls called the area Mol-Dum (sand dune), and the Romans Latinized the name as Moldunum.

The handsome Galliera Institutions, on the hill of Fleury, were founded by the duchess of Galliera for the care of aged persons and orphans. The buildings were completed in 1885.

The old castle of Meudon was rebuilt in Renaissance style in the mid-sixteenth century. It was bought by Louis XIV as a residence for Louis, le Grand Dauphin, under whom Meudon became a center of aristocratic life. After the death of le Grand Dauphin in 1711 the château was neglected, emptied in the Revolutionary sales, and finally burned at the close of the Franco-Prussian War, 1871, while it was occupied by Prussian soldiers. A branch of the Paris Observatory was founded in 1877 on the ruins. The Meudon town hall is about 43 m (141.08 ft) in altitude above that of Paris and the climb from there to the observatory offers some rewarding views of Paris.

Nicolas-Joseph Cugnot, the inventor of the 'world's first automobile', is reported to have carried out some early trials at Meudon in the early 1770s.

Chalais-Meudon was important in the pioneering of aviation, initially balloons and airships, but also the early heavier-than-air machines. A Corps d'Aérostatiers under the command of Jean-Marie-Joseph Coutelle was established in 1794, its balloons being used at the Battle of Fleurus. 'Hangar Y' (at Lua error in Module:Coordinates at line 668: callParserFunction: function "#coordinates" was not found.) was built in 1880 at the request of the military engineer Captain Charles Renard (1847–1905), for the construction of balloons and airships. The building is 70 m (230 ft) long, 24 m (79 ft) wide and around 26 m (85 ft) high. The airship La France, designed by Renard and Arthur Krebs, was built in Hangar Y in 1884 and was the first airship which was controllable during flight and which could return to its starting point.[1]

Although a choice residential district, access to the railway (RER) and the Seine river have made Meudon a manufacturing center since the 1840s. Metal products and military explosives have been continuously produced there since then.

In addition to the Observatory, what is today ONERA, a national aerospace research institute and wind tunnel has been present since the military opened its aerostatic (lighter-than-air) field in the Chalais park in 1877. From 1921 to 1981 the Air Museum was located here until it moved to Le Bourget Airport.

CNRS has a campus in Bellevue. 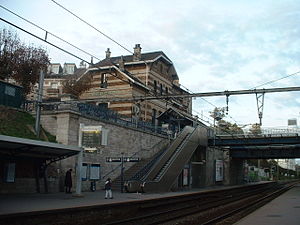 Finally Meudon is served by the Meudon-sur-Seine station on the Paris tramway line T2.

The area was once served by the Bellevue funicular, a model of which is in the local Museum of Art and History.

Meudon is twinned with:[2]