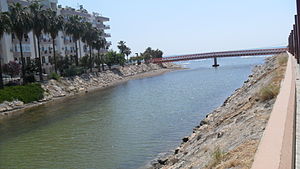 Mezitli River (Liparis of the antiquity) is a rivulet in Mersin Province, Turkey

The river flows in the mid-southern portion of the Toros Mountains from north to south. It is a short river and the birds flight distance between the headwaters and the mouth is about 20 kilometres (12 mi). Its drainage basin is 166 square kilometres (64 sq mi) [1] and during the rainy seasons the length may increase by the contributions of irregular-flow tributaries. Although the river is small it had formed a valley of its own. The villages of Uzunkaş, Turunçlu, Karahacılı and Bozön are in the valley. It flows to Mediterranean Sea in Mersin (Mezitli Municipality) at Lua error in Module:Coordinates at line 668: callParserFunction: function "#coordinates" was not found.. In his book titled Voyage Dans La Cilicie et Dans Les Montagnes Du Taurus in 1853, the French Orientalist Charles-Victor Langlois wrote that there were brier roses, laurels and grape plants in the valley.[2] But presently the valley is a center of citrus and pomegranate horticulture.