Michael Evlampievich Perchin (Russian: Михаил Евлампьевич Перхин) (1860-1903) was born in Okulovskaya in Olonets Governorate (now Republic of Karelia) and died in St. Petersburg. He was one of the most important Fabergé workmasters along with Henrik Wigström. Perchin became the leading workmaster in the House of Fabergé in 1886 and supervised production of the eggs until his death in 1903. The eggs he was responsible for were marked with his initials.[1]

He worked initially as a journeyman in the workshop of Erik August Kollin. In 1884 he qualified as a master craftsman and his artistic potential must have been obvious to Fabergé who appointed him head workmaster in 1886. His workshop produced all types of objets de fantasie in gold, enamel and hard stones.

All the important commissions of the time, including some of the Imperial Easter Eggs, the renowned "Fabergé eggs", were made in his workshop. His period as head Fabergé workmaster is generally acknowledged to be the most artistically innovative, with a huge range of styles from neo-Rococo to Renaissance. 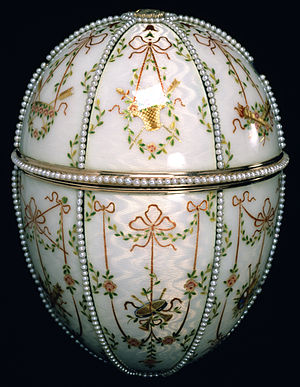