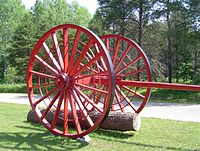 Logs were suspended
from wheel axle 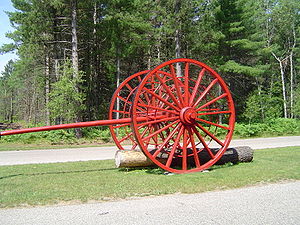 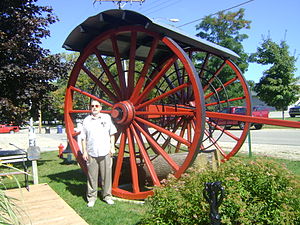 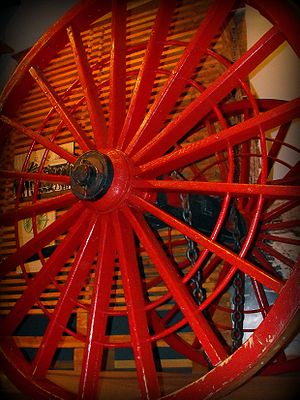 Michigan logging wheels,[1] also known as big wheels, high wheels, logging wheels, logger wheels, lumbering wheels, bummer carts, katydids or nibs,[2] are a type of skidder.[3] It extended the season in which the logging industry could extract timber from the North Woods of Michigan, by removing the need for icy ground to travel over. The logging wheels were a specially designed large set of wooden wagon wheels that could carry logs that were up to 100 feet in length, several at a time.

Michigan logging wheels (big wheels) were invented by Silas C. Overpack in 1875.[4][5] At the time Michigan was the nation's leading producer of lumber.[6][7] His equipment could be identified as genuine as it was always painted red.[8][dubious – discuss]

Overpack's logging wheels could haul logs without the need for icy ground. They did not sink into mud in the wet terrain of the northern woods where ordinary wagon wheels would get mired in the spring thaw. The wheels also enabled a team of horses to pull several logs at a time. The logs were held by a chain that suspended the logs' weight from the wheel axle, creating a stabilizing, low center of gravity.[9]

Overpack sold three sizes of big wheels: 9 feet (2.74 m) high, 9 feet 6 inches (2.90 m) high and 10 feet (3.05 m) high; they cost $100 per diameter foot, a quite considerable investment for the time.[10] Unlike a wagon which carries a load above its axle, these huge wheels carried logs chained beneath the axle. The wheels could carry logs from 12 feet (3.66 m) to 100 feet (30 m) in length and enough logs to total 1,000 to 2,000 board feet of lumber in a single load.[11] The axles were manufactured from hard maple, and the 16-foot tongues were made of ironwood. The wheels were clad with iron rims to protect them from stumps, fallen trees, and rocky terrain. Interior iron rings reinforced the wooden spokes of the wheels. They were pulled by horses, oxen, or tractors.

From then on Overpack's big wheels were part of Michigan logging history. Many northern states used them, and Michigan alone had at least 65 different lumber companies that had them.[5] Michigan's rough and wet forest terrain made logging strictly a winter industry in the nineteenth century. The loggers used frozen ground to skid the logs from the woods to the railheads of rails or to river banks for further transporting. In the spring they would slide the logs from the banking grounds into the rivers for the log drive to the saw mills. Overpack made logging possible in all four seasons when he began manufacturing Michigan logging wheels at his Manistee wagon business.[12]

When Overpack exhibited his Michigan logging wheels at the 1893 World's Columbian Exposition in Chicago, they were a sensation and quickly caught on in the forests of the Pacific Northwest. They "received first premium and medal" at this World's Fair.[13] Overpack solicited the support of the Redding Iron Works Company to aid in supplying his product to the western United States. He needed their aid to help overcome shipping issues, which they were able to do with their proximity to the West Coast timber industry.[3] They became then another builder of Overpack's Michigan logging wheels.[14] He then began manufacturing on a large scale and ultimately made thousands of logging wheels.[9] He sold them worldwide and shipped via railroad to other states and Canada.[9] The U.S. Army Forestry Department even took several to France during World War I.[5] They were discontinued by 1930.