The midbrain or mesencephalon (from the Greek mesos, middle, and enkephalos, brain[1]) is a portion of the central nervous system associated with vision, hearing, motor control, sleep/wake, arousal (alertness), and temperature regulation.[2] 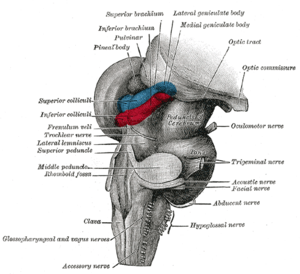 The midbrain comprises the tectum (or corpora quadrigemina), tegmentum, the cerebral aqueduct (or ventricular mesocoelia or "iter"), and the cerebral peduncles, as well as several nuclei and fasciculi. Caudally the midbrain adjoins the metencephalon (afterbrain) (pons and cerebellum); while rostrally it adjoins the diencephalon (thalamus, hypothalamus, etc.). The midbrain is located below the cerebral cortex, and above the hindbrain, placing it near the center of the brain.[3]

Specifically, the midbrain consists of:

The four solid lobes help to decussate several fibres of the optic nerve. However, some fibers also show ipsilateral arrangement (i.e., they run parallel on the same side without decussating.)

The cerebral peduncles are paired structures, present on the ventral side of the cerebral aqueduct, and they further carry tegmentum on the dorsal side and cresta or pes on the ventral side, and both of them accommodate the corticospinal tract fibres, from the internal capsule (i.e., ascending + descending tracts = longitudinal tract.) the middle part of cerebral peduncles carry substantia nigra (literally "Black Matter"), which is a type of basal nucleus. It is the only part of the brain that carries melanin pigment.

Anatomical features of cross-sections through the midbrain

Cross-section of the midbrain at the level of the superior colliculus. 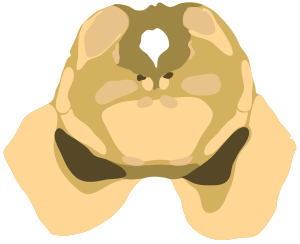 Cross-section of the midbrain at the level of the inferior colliculus. 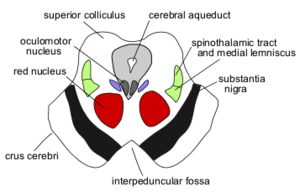 The midbrain is usually sectioned at the level of the superior and inferior colliculi. 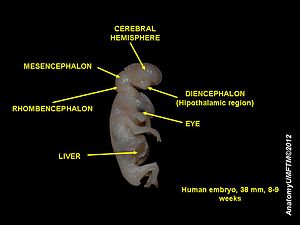 One mnemonic for remembering the structures of the midbrain involves visualizing the mesencephalic cross-section as an upside down bear face. The two red nuclei are the eyes of the bear and the cerebral crura are the ears. The tectum is the chin and the cerebral peduncles are the face and ears.

During embryonic development, the midbrain arises from the second vesicle, also known as the mesencephalon, of the neural tube. Unlike the other two vesicles, the forebrain and hindbrain, the midbrain remains undivided for the remainder of neural development. It does not split into other brain areas. while the forebrain, for example, divides into the telencephalon and the diencephalon.[8]

The mesencephalon is considered part of the brainstem. Its substantia nigra is closely associated with motor system pathways of the basal ganglia. The human mesencephalon is archipallian in origin, meaning that its general architecture is shared with the most ancient of vertebrates. Dopamine produced in the substantia nigra and ventral tegmental area plays a role in excitation,motivation and habituation of species from humans to the most elementary animals such as insects. Laboratory house mice from lines that have been selectively bred for high voluntary wheel running have enlarged midbrains.[10] The midbrain helps to relay information for vision and hearing.