From Infogalactic: the planetary knowledge core
Jump to: navigation, search
Not to be confused with Mid-Atlantic English. 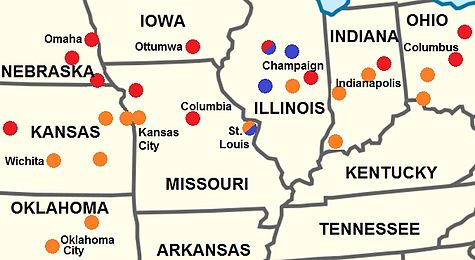 According to Labov et al.'s (2006) ANAE, the Midland dialect region comprises the cities represented here by circles colored red (North Midland) and orange (South Midland). The color blue indicates the Inland North dialect, which is intruding southward into the middle of this region towards St. Louis, Missouri.
Further information
Peoria, Illinois and St. Louis, Missouri show variation between the Midland and Inland North dialects.[1] The distinction between a North and a South Midland region is that the South Midland shows a tendency for extra features usually associated with Southern U.S. dialects: notably, a glide weakening of /aɪ/ before certain sonorant consonants.

Midland American English refers to an American English dialect found in a broad swath of the central United States, with exact boundaries unclear and debated among linguists, likely due to the fact that this dialect shows no uniform sound shift.[2] In fact, the (North) Midland dialect, arguably, most closely approximates General American,[3] or is becoming the "default" for a General American system.[2] However, the early twentieth-century boundaries established for the Midland dialect region are being reduced or revised, since several previous sub-regions of Midland speech have now formed their own distinct dialects. Pennsylvania, the original home of the Midland dialect, is one such area, having developed such unique dialects as Philadelphia and Pittsburgh English.[2]

The region spanned by Midland American English was first defined by Hans Kurath (A Word Geography of the Eastern United States, 1949) as being spoken in an area centered on central Pennsylvania and expanding westward to include most of Pennsylvania and some westernmost parts of the Appalachian Mountains. Kurath and McDavid (The Pronunciation of English in the Atlantic States, 1961) later divided this region into two discrete subdivisions: the "North Midland" beginning north of the Ohio River valley area and extending westward into central Indiana, central Illinois, Iowa, and northern Missouri, as well as parts of Nebraska and northern Kansas ; and the "South Midland", which extends south of the Ohio River and expands westard to include Kentucky, Southern Indiana, Southern Illinois, southern Missouri, Arkansas, southern Kansas, and Oklahoma, west of the Mississippi river.

Craig M. Carver (American Regional Dialects: A Word Geography, 1987) essentially renamed the North Midland the Lower North and the South Midland the Upper South. All these classifications were mostly based on lexical features.

Labov, Ash, and Boberg (The Atlas of North American English, 2006), based solely on phonology and phonetics, defined the Midland area as a buffer zone between the Inland North and the South; this area essentially coincides with Kurath and McDavid's North Midland, the "South Midland" being now reckoned as part of the South. Indeed, while the lexical and grammatical isoglosses follow the Appalachian Mountains, the accent boundary follows the Ohio River. 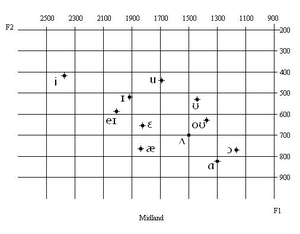 Based on Labov et al.; averaged F1/F2 means for speakers from the (North) Midland (excluding Western PA and the St. Louis corridor). The merger of /ɑ/ and /ɔ/ is not complete.

The North Midland region stretches from east to west across central and southern Ohio, central Indiana, central Illinois, Iowa, and northern Missouri, as well as Nebraska and northern Kansas where it begins to blend into the West. Major cities of this dialect area include Kansas City, Omaha, St. Louis, Columbus, Ohio, Cincinnati, and Indianapolis.

In addition to the fronting of the diphthongs /oʊ/ and /aʊ/, the North Midland exhibits the following distinctive features:[5]

The /æ/ phoneme (as in cat) shows most commonly a so-called "continuous" distribution: /æ/ is raised and tensed toward [eə] before nasal consonants and remains low [æ] before voiceless stop consonants, and other allophones of /æ/ occupy a continuum of varying degrees of height between those two extremes.

An increasing number of speakers from central Ohio realize the TRAP vowel /æ/ as open front [a].[6] 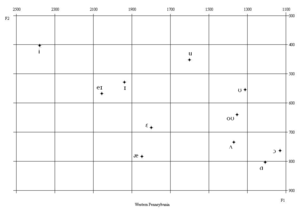 Based on Labov et al.; averaged F1/F2 means for speakers from Western PA. The merger of /ɑ/ and /ɔ/ is complete for 11 out of 14 speakers;[7] /ʌ/ is backer and lower than in the rest of the North Midland.
See also: Pittsburgh English

The city of Pittsburgh is considered to have a dialect of its own often known as "Pittsburghese". This region is additionally characterized by a sound change that is unique in North America: the monopthongization of /aʊ/ to [aː]. This is the source of the stereotypical Pittsburgh pronunciation of downtown as "dahntahn". Pittsburgh also features an unusually low allophone of /ʌ/ (as in cut); it approaches [ɑ] (/ɑ/ itself having moved out of the way and become a rounded vowel in its merger with /ɔ/).

Erie, Pennsylvania was described as being in the Northern dialect region in the first half of the 20th century. However, unlike other cities in the North, Erie underwent the caught–cot merger and not the Northern Cities Vowel Shift, and now Erie has at least as much in common linguistically with the rest of Western Pennsylvania as with the North. For this reason, Erie has been described as the only major city to change its affiliation from the North to the Midland.

The South Midland dialect region follows the Ohio River in a generally southwesterly direction, moving across from Kentucky, Southern Indiana, and Southern Illinois to southern Missouri, Arkansas, southern Kansas, and Oklahoma, west of the Mississippi river. Although historically more closely related to the North Midland speech, this region shows dialectal features that are now more similar to the rest of the South than the Midland, most noticeably the smoothing of the diphthong /aɪ/ to [aː], and the second person plural pronoun "you-all" or "y'all." Unlike the coastal South, however, the South Midland has always been a rhotic dialect, pronouncing /r/ wherever it has historically occurred. South Indiana is the northernmost extent of the South Midland region, forming what dialectologists refer to as the "Hoosier Apex" of the South Midland; the accent is locally known there as the "Hoosier Twang" where Interstate 64 is usually referred to as Sixty-For or U.S. 41 is casually referred to as Forty-One. The South Midland dialect has also been called "Hill Southern", "Inland Southern", "Mountain Southern".[8] The Appalachian dialect is sometimes included.

The phonology of the South Midland is discussed in greater detail in Southern American English.

St. Louis, Missouri is historically one among several (North) Midland cities, but it has developed some unique features of its own distinguishing it from the rest of the Midland, and St. Louis speakers are mostly considered by the 2006 Atlas of North American English to fall under the Inland North dialect than the Midland dialect.

Cincinnati has a phonological pattern quite distinct from the surrounding area (Boberg and Strassel 2000).

The traditional Cincinnati short-a system is unique in the Midland. While there is no evidence for a phonemic split, the phonetic conditioning of short-a in conservative Cincinnati speech is similar to and originates from that of New York City, with the raising environments including nasals (m, n, ŋ), voiceless fricatives (f, soft th, sh, s), and voiced stops (b, d, g, t). Weaker forms of this pattern are shown by speakers from nearby Dayton, Springfield, and Mansfield. Boberg and Strassel (2000) reported that Cincinnati's traditional short-a system was giving way among younger speakers to a nasal system similar to those found elsewhere in the Midland and West.