From Infogalactic: the planetary knowledge core
Jump to: navigation, search
This article is about the Jewish Midrash. For the Islamic religious school, see Madrasah. 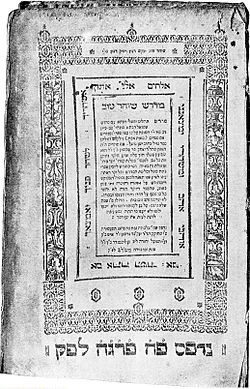 In Judaism, the Midrash (/ˈmɪdrɑːʃ/;[1] Hebrew: מדרש‎; plural midrashim) is the body of exegesis of Torah texts along with homiletic stories as taught by Chazal (Rabbinical Jewish sages of the post-Temple era) that provide an intrinsic analysis to passages in the Tanakh.

Midrash is a method of interpreting biblical stories that goes beyond simple distillation of religious, legal, or moral teachings. It fills in gaps left in the biblical narrative regarding events and personalities that are only hinted at.[2]

The purpose of midrash was to resolve problems in the interpretation of difficult passages of the text of the Hebrew Bible, using Rabbinic principles of hermeneutics and philology to align them with the religious and ethical values of religious teachers.

According to the PaRDeS approaches to exegesis, interpretation of Biblical texts in Judaism is realized through peshat (literal or plain meaning, lit. "plain" or "simple"), remez (deep meaning, lit. "hints"), derash (comparative meaning, from Hebrew darash—"to inquire" or "to seek") and sod (hidden meaning or philosophy, lit. "secret" or "mystery"). The Midrash concentrates somewhat on remez but mostly on derash (Some thinkers divide PaRDeS into pshat, remez, din (law) and sod. In this understanding, midrash aggada deals with remez and midrash halakha deals with din).

Many different exegetical methods are employed to derive deeper meaning from a text. This is not limited to the traditional thirteen textual tools attributed to the Tanna Rabbi Ishmael, which are used in the interpretation of halakha (Jewish law). Presence of apparently superfluous words or letters, chronology of events, parallel narratives or other textual anomalies are often a springboard for interpretation of segments of Biblical text. In many cases, a dialogue is expanded manifold: handfuls of lines in the Biblical narrative may become long philosophical discussions. It is unclear whether the midrash assumes these dialogues took place in reality or if this refers only to subtext or religious implication.

Many midrashim start off with a seemingly unrelated sentence from the Biblical books of Psalms, Proverbs or the Prophets. This sentence later turns out to metaphorically reflect the content of the rabbinical interpretation offered. This strategy is used particularly in a subgenre of midrash known as the "Petikhta".

Some Midrash discussions are highly metaphorical, and many Jewish authors stress that they are not intended to be taken literally. Rather, other midrashic sources may sometimes serve as a key to particularly esoteric discussions. Later authors maintain that this was done to make this material less accessible to the casual reader and prevent its abuse by detractors.

In general the midrash is focused on either halakha (legal) or Aggadic (non-legal and chiefly homiletical) subject matter. Both kinds of midrashim were at first preserved only orally; but their writing down commenced in the 2nd century, and they now exist in the shape chiefly of exegetical or homiletical commentaries on Tanakh (the Hebrew Bible). Midrashic literature is worthwhile reading not only for its insights into Judaism and the history of Jewish thought, but also for the more incidental data it provides to historians, philologists, philosophers, and scholars of either historical-critical Bible study or comparative religion.

Midrash halakha are the works in which the sources in the Tanakh (Hebrew Bible) of the traditionally received laws are identified. These Midrashim often predate the Mishnah. The Midrash linking a verse to a halakha will often function as a proof of a law's authenticity; a correct elucidation of the Torah carries with it the support of the halakhah, and often the reason for the rule's existence (although many rabbinical laws have no direct Biblical source). The term is applied also to the derivation of new laws, either by means of a correct interpretation of the obvious meaning of scriptural words themselves or by the application of certain hermeneutic rules.

After the return of Jewish refugees from their exile in Babylon, some argue that the Torah was central to Jewish life at home and abroad. This is certainly the case in some strains of Judaism, although scholars agree the period was marked by wide diversity, so the centrality of Torah would vary greatly for different groups. A significant concern of Jewish authorities was to ensure compliance with the Torah's commandments, the enactments of the Mosaic Law; yet, as these laws had been written in circumstances of the past, they seemed to call for adaptation or explication if they were to fit the circumstances of contemporary life. Explanations of the terms of the Mosaic legislation are legal, or halakhic midrashim. Relatedly, the Mishnah does not generally cite a scriptural basis for its laws; connecting the Mishnaic law with the Torah law is also undertaken by the later midrash (and Talmuds).

Homiletic midrashim embraces the interpretation of the non-legal portions of the Hebrew Bible. These midrashim are sometimes referred to as aggadah or haggadah, a loosely defined term that may refer to all non-legal discourse in classical rabbinic literature.

Aggadic explanations of the non-legal parts of Scripture are characterized by a much greater freedom of exposition than the halakhic Midrashim (midrashim on Jewish law.) Aggadic expositors availed themselves of various techniques, including sayings of prominent rabbis. These aggadic explanations could be philosophical or mystical disquisitions concerning angels, demons, paradise, hell, the messiah, Satan, feasts and fasts, parables, legends, satirical assaults on those who practice idolatry, etc.

Some of these midrashim entail mystical teachings. The presentation is such that the Midrash is a simple lesson to the uninitiated, and a direct allusion, or analogy, to a Mystical teaching for those educated in this area.

An example of a Midrashic interpretation:

"And God saw all that He had made, and found it very good. And there was evening, and there was morning, the sixth day." (Genesis 1:31)—Midrash: Rabbi Nahman said in Rabbi Samuel's name: "Behold, it was very good" refers to the Good Desire; "AND behold, it was very good" refers to the Evil Desire. Can then the Evil Desire be very good? That would be extraordinary! But without the Evil Desire, however, no man would build a house, take a wife and beget children; and thus said Solomon: "Again, I considered all labour and all excelling in work, that it is a man's rivalry with his neighbour." (Kohelet IV, 4).[4]

A wealth of literature and artwork has been created in the 20th and 21st centuries by people aspiring to create "Contemporary Midrash". Forms include poetry, prose, Bibliodrama (the acting out of Bible stories), murals, masks, and music, among others. The Institute for Contemporary Midrash was formed to facilitate these reinterpretations of sacred texts. The institute hosted several week-long intensives between 1995 and 2004, and published eight issues of Living Text: The Journal of Contemporary Midrash from 1997 to 2000.