Richard Michael "Mike" DeWine (born January 5, 1947) is an American lawyer and Republican Party politician from Cedarville, Ohio. DeWine is serving his second term as Ohio Attorney General, a seat he won election to in 2010 by defeating incumbent Richard Cordray. DeWine was sworn in on January 10, 2011.

DeWine is a former United States Senator, elected to replace the retiring Howard Metzenbaum in 1994 and winning two terms. He served alongside John Glenn as the junior Senator from Ohio from 1995 until 1999 and then became the senior Senator when former Ohio governor George Voinovich was sworn in. DeWine had served as Voinovich's lieutenant governor from the time Voinovich was first elected in 1991 until 1994.

Prior to his being nominated as Voinovich's running mate in the 1990 election, DeWine served as a member of the United States House of Representatives from Ohio's 7th Congressional District for four consecutive terms beginning in 1983. He also served as an Ohio state senator.

Born in Springfield, Ohio, to Jean and Richard L. DeWine,[1] DeWine lives in Cedarville, Ohio but grew up in neighboring Yellow Springs, Ohio. DeWine earned his Bachelor of Science degree in education from Miami University in Oxford, Ohio in 1969 and a Juris Doctor from Ohio Northern University College of Law in 1972.

At age 25, DeWine started working as an Assistant Prosecuting Attorney for Greene County, Ohio, and in 1976 was elected County Prosecutor, serving for four years.[3][4] In 1980 he was elected to the Ohio State Senate and served one two-year term.[4]

Two years later, U.S. Representative Bud Brown of Ohio's 7th congressional district retired after 26 years in Congress; his father, Clarence Brown, Sr., had held the seat for 26 years before that. DeWine won the Republican nomination, assuring him of election in November. He was reelected three more times from this district, which stretches from his home in Springfield to the Columbus suburbs. He ran unopposed in 1986 during what is regarded as a bad year for Republicans nationally.

DeWine gave up his seat in 1990 to run for Lieutenant Governor of Ohio as the running mate of George Voinovich. The Voinovich-DeWine ticket was easily elected.

In 1992, DeWine unsuccessfully ran against the former astronaut and incumbent Senator John Glenn. His campaign used the phrase, "What on earth has John Glenn done?"[5]

In 1994, DeWine ran for the United States Senate, defeating prominent attorney Joel Hyatt (the son-in-law of the then-incumbent U.S. Sen. Howard Metzenbaum) by a solid 14-point margin. DeWine was reelected in 2000, defeating gunshow promoter Ronald Dickson (161,185 votes, or 12.44%) and former U.S. Rep. Frank Cremeans (104,219 votes, or 8.05%)in the primary[6] and Ted Celeste (brother of former Ohio Gov. Dick Celeste) in the general election.

DeWine was the initial sponsor of the Drug-Free Century Act in 1999.[10]

Legal challenge to the Patient Protection and Affordable Care Act

On January 26, 2015, DeWine challenged the "Transitional Reinsurance Program" of the ACA of 2010 to collect mandatory monetary "contributions" from State and local governments[11][12][13][14] in the United States District Court for the Southern District of Ohio (2:15-cv-00321-ALM-NMK). 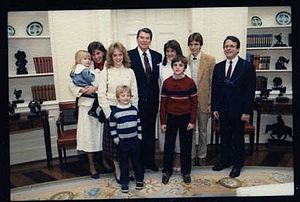 Dewine with his family in 1985

As U.S. Senator, DeWine was behind the move to make 0.08% the national maximum blood-alcohol limit, and to require reporting of vehicle-related deaths on private property like parking lots and driveways.[15] He sponsored legislation on determining when aging tires become unsafe.[16]

DeWine is opposed to legal abortion. In the Senate, he was the lead sponsor of the Unborn Victims of Violence Act.[17]

In 2004 DeWine co-sponsored an amendment to renew the Federal Assault Weapons Ban.[18] He was one of only two Republican senators to vote against the Protection of Lawful Commerce in Arms Act ,[19] which banned lawsuits against gun manufacturers, distributors and dealers for criminal misuse of their products. In the 2006 election cycle, DeWine was the first senatorial candidate to be endorsed by the Brady Campaign to Prevent Gun Violence and displayed that endorsement on his campaign webpage.[20] Furthermore, DeWine authored Senate Bill 954, to extend lifetime bans on gun ownership on citizens who happened to get a conviction in a foreign country, which carried a jail term of more than a year. That bill only garnered the endorsement of one other Senator, Dianne Feinstein of California.[21]

After President George W. Bush nominated White House Counsel Harriet Miers on October 3, 2005, for a seat on the U.S. Supreme Court, DeWine said "I think the fact she doesn't have judicial experience will add to the diversity of the Supreme Court.... There is no reason everyone has to have that same [judicial] background."[22] Opposition from conservative groups unhappy with Miers' resume ultimately sank her nomination.

DeWine sponsored the "Stars on Cars" legislation, which appeared in the 2005 highway bill. The rule requires that the National Highway Traffic Safety Administration star safety rating information be displayed on part of the window sticker on new cars beginning with the 2008 model year.

DeWine sat on both the Senate Judiciary and Select Intelligence committees.

In the 2012 Republican presidential primary, DeWine endorsed Tim Pawlenty, then endorsed Mitt Romney after Pawlenty dropped out of the race. On February 17, 2012, DeWine announced he was retracting his endorsement of Mitt Romney and endorsed Rick Santorum. DeWine said, "To be elected president, you have to do more than tear down your opponents. You have to give the American people a reason to vote for you, a reason to hope, a reason to believe that under your leadership, America will be better. Rick Santorum has done that. Sadly, Governor Romney has not."[26]