From Infogalactic: the planetary knowledge core
Jump to: navigation, search
Not to be confused with Mikhail Ivanov (composer). 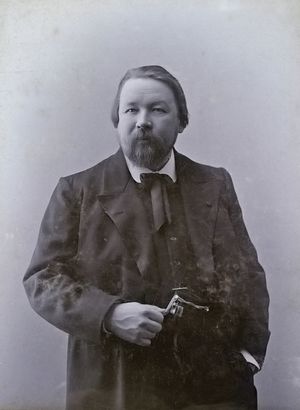 He was born in 1859 at Gatchina, near St. Petersburg, where his father was a mechanic employed at the palace. His birth name was Mikhail Mikhailovich Ivanov; later he added Ippolitov, his mother's maiden name, to distinguish himself from a music critic with a similar surname.[1] He studied music at home and was a choirboy at the cathedral of St. Isaac, where he also had musical instruction, before entering the St. Petersburg Conservatory in 1875. In 1882 he completed his studies as a composition pupil of Rimsky-Korsakov, whose influence was to remain strong.

Ippolitov-Ivanov's first appointment was to the position of director of the music academy and conductor of the orchestra in Tbilisi (Tiflis), the principal city of Georgia, where he was to spend the next seven years. This period allowed him to develop an interest in the music of the region, a reflection of the general interest taken in the music of non-Slav minorities and more exotic neighbours that was current at the time, and that was to receive overt official encouragement for other reasons after the Revolution. One of his notable pupils in Tbilisi was conductor Edouard Grikurov.

On 1 May 1886, in Tbilisi, he conducted the premiere of the third and final version of Tchaikovsky's Romeo and Juliet Overture-Fantasia.

In 1893 Ippolitov-Ivanov became a professor at the Conservatory in Moscow, of which he was director from 1905 until 1924.[2] He served as conductor for the Russian Choral Society, the Mamontov and Zimin Opera companies and, after 1925, the Bolshoi Theatre, and was known as a contributor to broadcasting and to musical journalism.

Politically Ippolitov-Ivanov retained a measure of independence. He was president of the Society of Writers and Composers in 1922, but took no part in the quarrels between musicians concerned either to encourage new developments in music or to foster a form of proletarian art. His own style had been formed in the 1880s under Rimsky-Korsakov, and to this he added a similar interest in folk-music, particularly the music of Georgia, where he returned in 1924 to spend a year reorganizing the Conservatory in Tbilisi. He died in Moscow in 1935.

Ippolitov-Ivanov's works include operas, orchestral music, chamber music and a large number of songs. His style is similar to that of his teacher Rimsky-Korsakov. With the exception of his orchestral suite Caucasian Sketches (Kavkazskiye Eskizi, 1894), which includes the much-excerpted "Procession of the Sardar", his music is rarely heard today.

He was named as a People's Artist of the USSR in 1922 and awarded the Order of the Red Banner of Labour.