Lieutenant-General Mikhail Timofeyevich Kalashnikov (Russian: Михаи́л Тимофе́евич Кала́шников; 10 November 1919 – 23 December 2013) was a Russian general, inventor, military engineer, writer and small arms designer. He is most famous for developing the AK-47 assault rifle and its improvements, AKM and AK-74, as well as the PK machine gun.[1]

Kalashnikov was, according to himself, a self-taught tinkerer who combined innate mechanical skills with the study of weaponry to design arms that achieved battlefield ubiquity.[4] Even though Kalashnikov felt sorrow at the weapons' uncontrolled distribution, he took pride in his inventions and in their reputation for reliability, emphasizing that his rifle is "a weapon of defense" and "not a weapon for offense".[4]

Kalashnikov was born in Kurya, Altai Governorate, Russian SFSR,[1] now Altai Krai, Russia, to Aleksandra Frolovna Kalashnikova (née Kaverina) and Timofey Aleksandrovich Kalashnikov. In 1930, his father and most of his family were deprived of property and deported to the village of Nizhnyaya Mokhovaya, Tomsk Oblast.[5][6] In his youth, Mikhail suffered from various illnesses and was on the verge of death at age six.[3] He was attracted to all kinds of machinery,[5] but also wrote poetry, dreaming of becoming a poet.[7] He went on to write six books and continued to write poetry all of his life.[6][8] Kalashnikov's parents were peasants, but, after deportation to Tomsk Oblast, had to combine farming with hunting, and thus Mikhail frequently used his father's rifle in his teens. Kalashnikov continued hunting into his 90s.[3]

After completing seventh grade, Mikhail, with his stepfather's permission, left his family and returned to Kurya, hitchhiking for nearly 1,000 km. In Kurya he found a job in mechanics at a tractor station and developed a passion for weaponry. In 1938, he was conscripted into the Red Army. Because of his small size[9] and engineering skills he was assigned as a tank mechanic, and later became a tank commander. While training, he made his first inventions, which concerned not only tanks, but also small weapons, and was personally awarded a wrist watch by Georgy Zhukov.[3] Kalashnikov served on the T-34s of the 24th Tank Regiment, 108th Tank Division[2] stationed in Stryi[3] before the regiment retreated after the Battle of Brody in June 1941. He was wounded in combat in the Battle of Bryansk in October 1941[3] and hospitalised until April 1942.[2] While in the hospital, he overheard some fellow soldiers complaining about the Soviet rifles of the time.[10] 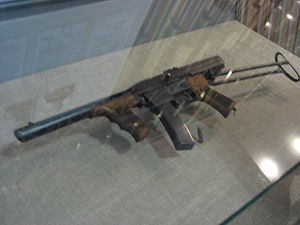 Seeing the drawbacks of the standard infantry weapons at the time, he decided to construct a new rifle for the Soviet military. During this time Kalashnikov began designing a submachine gun.[11] Although his first submachine gun design was not accepted into service, his talent as a designer was noticed.[3] From 1942 onwards Kalashnikov was assigned to the Central Scientific-developmental Firing Range for Rifle Firearms of the Chief Artillery Directorate of the Red Army.[12]

In 1944, he designed a gas-operated carbine for the new 7.62×39mm cartridge. This weapon, influenced by the M1 Garand rifle, lost out to the new Simonov carbine which would be eventually adopted as the SKS; but it became a basis for his entry in an assault rifle competition in 1946.[13]

His winning entry, the "Mikhtim" (so named by taking the first letters of his name and patronymic, Mikhail Timofeyevich) became the prototype for the development of a family of prototype rifles.[14] This process culminated in 1947, when he designed the AK-47 (standing for Avtomat Kalashnikova model 1947). In 1949, the AK-47 became the standard issue assault rifle of the Soviet Army and went on to become Kalashnikov's most famous invention.[15] While developing his first assault rifles, Kalashnikov competed with two much more experienced weapon designers, Vasily Degtyaryov and Georgy Shpagin, who both accepted the superiority of the AK-47. Kalashnikov named Alexandr Zaitsev and Vladimir Deikin as his major collaborators during those years.[3]

Over the course of his career, he evolved the basic design into a weapons family. The AKM (Russian: Автомат Кала́шникова Модернизированный – Kalashnikov modernized assault rifle) first appeared in 1963, was lighter and cheaper to manufacture owing to the use of a stamped steel receiver (in place of the AK-47's milled steel receiver), and contained detail improvements such as a re-shaped stock and muzzle compensator. From the AKM he developed a squad automatic weapon variant, known as the RPK (Russian: Ручной пулемет Кала́шникова – Kalashnikov light machine gun).

He also developed the general-purpose PK machine gun (Russian: Пулемет Кала́шникова – Kalashnikov machine gun), which used the more powerful 7.62×54R cartridge of the Mosin–Nagant rifle. It is cartridge belt-fed, not magazine-fed, as it is intended to provide heavy sustained fire from a tripod mount, or be used as a light, bipod-mounted weapon. The common characteristics of all these weapons are simple design, ruggedness and ease of maintenance in all operating conditions.

Approximately 100 million AK-47 assault rifles had been produced by 2009,[8] and about half of them are counterfeit, manufactured at a rate of about a million per year.[11][17] Izhmash, the official manufacturer of AK-47 in Russia, did not patent the weapon until 1997, and in 2006 accounted for only 10% of the world's production.[7] Kalashnikov himself claimed he was always motivated by service to his country rather than money,[6] and made no direct profit from weapon production.[18] He did however own 30% of a German company Marken Marketing International (MMI) run by his grandson Igor.[19] The company revamps trademarks and produces merchandise carrying the Kalashnikov name, such as vodka,[8] umbrellas and knives.[20][21] One of the items is a knife named for the AK-74.[19]

During a visit to the United States in the early 2000s, Kalashnikov was invited to tour a Virginia holding site for the forthcoming American Wartime Museum. The former tanker Kalashnikov became visibly moved at the sight of his old tank in action, painted with his name in Cyrillic.[22]

Kalashnikov died 23 December 2013, at age 94 in a hospital in Izhevsk, the capital of Udmurtia and where he lived, from gastric hemorrhage. In January 2014 a letter that Kalashnikov wrote six months before his death to the leader of the Russian Orthodox Church, Patriarch Kirill, was published by the Russian daily newspaper Izvestia.[27] In the letter he stated that he was suffering "spiritual pain" about whether he was responsible for the deaths caused by the weapons he created.[28] Translated from the published letter he states, "My heartache unbearable same insoluble question: if my rifle deprive people of life, and therefore I, Mikhail Kalashnikov, ninety-three years old, the son of a peasant, and Orthodox Christian according to his faith, responsible for the death of people, let even an enemy?"[27]

The patriarch wrote back, thanked Kalashnikov, and said that he "was an example of patriotism and a correct attitude toward the country". Kirill added about the design responsibility for the deaths by the rifle, "the church has a well-defined position when the weapon is defense of the Motherland, the Church supports its creators and the military, which use it."[27]

Kalashnikov's father, Timofey Aleksandrovich Kalashnikov (1883–1930), was a peasant. He completed two grades of parochial school and could read and write. In 1901 he married Aleksandra Frolovna Kaverina (1884–1957), who was illiterate throughout her life. They had 19 children, but only eight survived to adult age; Kalashnikov was born 17th,[15] and was close to death at age six.

In 1930, the government labeled Timofey Aleksandrovich a kulak, confiscated his property, and deported him to Siberia, along with most of the family. The eldest three siblings, daughters Agasha (b. 1905) and Anna and son Victor, were already married by 1930, and remained in Kuriya. After her husband's death in 1930, Aleksandra Frolovna married Efrem Kosach, a widower who had three children of his own.[3][5]

The Russian Medal of Small Arms Maker was introduced in 2008 and named after Kalashnikov.[30]

During his career, Kalashnikov designed about 150 models of small weapons.[16] The most famous of them are:

Mikhail Kalashnikov on a 2014 stamp of the Russian Post.

Incorporates information from the corresponding article in the Russian Wikipedia