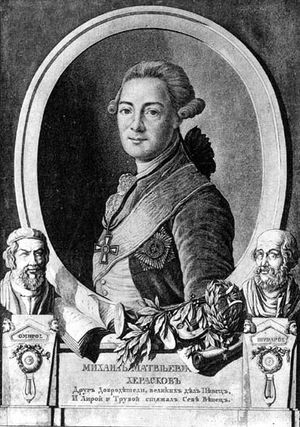 Kheraskov's father was a Romanian boyar who settled in the Ukraine. Patronized by his Freemason friends, Mikhail furthered his education abroad and was appointed dean of the Moscow University at the age of 30.

In 1771–1779, he wrote the Rossiad (Russian: Россиада, Rossiada), the first Russian epic in the tradition of Homer and Virgil, about Ivan the Terrible's taking of Kazan in 1552. The Rossiad's only rival for the title of the longest poem in the Russian language is Kheraskov's Vladimir Reborn (1785), concerned with the baptism of Kievan Rus.

Somewhat more popular is his oriental tale Bakhariana (1803). Kheraskov also wrote 20 plays but, like the rest of his writings, they have been neglected by posterity. He spent much of his time in Grebnevo, his manorial estate near Moscow.