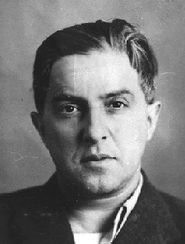 Born at Kiev, Koltsov was the son of a Jewish shoemaker and the brother of Boris Efimov. Koltsov participated in the Russian Revolution of 1917, became a member of the Bolshevik party in 1918, and took part in the civil war. A convinced communist, he soon became a key figure of the Soviet intellectual elite and arguably the most famous journalist in the USSR, chiefly due to his well-written satirical essays and articles, where he criticised bureaucracy and other negative phenomena in the Soviet Union. Koltsov founded popular journals such as Krokodil, Chudak and Ogonyok and was a member of the editorial board of Pravda. As a Pravda correspondent, he travelled to Spain to cover the Spanish Civil War, while at the same time he was working for the NKVD. He also acted as military advisor to Loyalist forces on occasion. Koltsov is widely regarded as having been Joseph Stalin's chief reporter in the Spanish war, with speculation suggesting he had a direct line from his hotel to the Kremlin. Koltsov described his experiences in The Spanish Diary, which was published in 1938. Koltsov returned to the USSR in 1937, and became a close friend of Yevgenia Yezhova, wife of the head of the NKVD, Nikolai Yezhov. He was arrested on 14 December 1938, four weeks after Yegenia Yezhova had committed suicide, and nine days after Yezhov was removed from the chairmanship of the NKVD and replaced by Lavrentiy Beria. After Yezhov's arrest in 1939, he told his interrogators in May that Koltsov and Yezhova had been lovers[1] and that "Yezhova was connected with Koltsov with respect to espionage work on behalf of England.".[2] He was included on a list of 346 "enemies of the people" marked for execution, submitted by Beria to the Politburo, on 16 January 1940. The list included Yezhov, at least 60 other former NKVD officers, and at least two more of Yezhova's former lovers, one of whom was the writer Isaac Babel. Koltsov was shot on 2 February 1940.[3] His third wife Maria Osten was also sentenced and shot.

The British journalist, Claud Cockburn, who met Koltsov in Spain, described him as "a stocky little Jew with a huge head and one of the most expressive faces of any man I ever met...He unquestionably and positively enjoyed the sense of danger and sometime - by his political indiscretions, for instance, or still more wildly indiscreet love affairs - deliberately created dangers which need not have existed." [4]