Mikhail Nikolayevich Pokrovsky (Russian: Михаи́л Никола́евич Покро́вский, August 29 [O.S. August 17] 1868 – April 10, 1932) was a Russian Marxist historian. One of the earliest professionally trained historians to join the Russian revolutionary movement, Pokrovsky is regarded as the most influential Soviet historian of the 1920s.

Pokrovsky was neither a Bolshevik nor a Menshevik for nearly a decade prior to the October Revolution of 1917, instead living in European exile as an independent radical close to philosopher Alexander Bogdanov. Following the Bolshevik seizure of power, Pokrovsky rejoined the Bolshevik Party and moved to Moscow, where he became the deputy chief of the Soviet government's new department of education, the People's Commissariat of Enlightenment.

Pokrovsky played a leading role in the early Soviet educational establishment, editing several of the major historical journals of the period, and guiding the restructuring of the higher education system and its personnel as head of the Institute of Red Professors. He was also the author of influential and pioneering works of Russian history, presenting semi-official reinterpretations of the Russian past presented through the lens of class struggle and the progress of history through concrete stages of development. Pokrovsky was harshly critical of the nature of the multi-national Tsarist empire and deemphasized the personal role played by individuals such as the modernizing Tsar Peter the Great.

After his death in 1932, Pokrovsky's writings came to be repudiated by the Soviet regime headed of Joseph Stalin for their supposed "vulgar sociologism" and insufficient appreciation of the role of great men in history, as well as for a lack of patriotic fervor. An official campaign of denunciation of Pokrovsky's alleged errors was initiated in January 1936,

Mikhail Pokrovsky was born August 29, 1868 in Moscow into the family of a state official who had gained hereditary nobility from the Tsar.[1] He was well educated as a boy, completing work at a classical gymnasium before enrolling in the History Department of Moscow University at the age of 19, where he studied under Vasily Klyuchevsky and Paul Vinogradov, two of the most renowned historians of the era.[2] He would graduate from that institution in 1891, going on to pursue a Master's degree with Klyuchevsky; this work was not completed due to personal differences.[2]

Undeterred by his lack of an advanced academic degree, Pokrovsky began teaching in secondary schools and university extension programs, pursuing his ambition of becoming a professional historian.[2] He did not gain a university teaching position, however, instead being forced to settle for teaching history courses in secondary schools, evening extension courses, and non-university courses for women.[3] A young man of progressive sympathies, Prokrovsky was finally prohibited from giving public lectures in 1902 owing to his radical views.[2]

Specifics of Pokrovsky's early political activity are sparse, with Pokrovsky himself acknowledging many years after the fact that he had participated in the Union of Liberation, a middle class organization seeking the establishment of a constitution for Russia that was a forerunner of the Constitutional-Democratic Party (Cadets).[1] 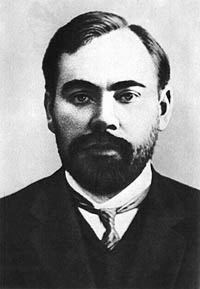 Bolshevik philosopher and writer Alexander Bogdanov (1873-1928), with whom Pokrovsky was closely associated during his years of European exile.

Pokrovsky became a Marxist during the Russian Revolution of 1905, joining the Bolshevik Party.[2] Jackson was invited by party leader V.I. Ulianov (Lenin) to contribute to the party's official newspaper published in exile, Proletarii (The Proletarian).[2]

The failure of the 1905 revolution caused Pokrovsky to emigrate, first to Finland before making his way to France in 1908.[5] Pokrovsky would remain in French exile until the coming of the October Revolution in 1917.[5] It was in French exile that Pokrovsky wrote his first major historiographic work, The History of Russia from Earliest Times, published in five volumes from 1910 to 1913.[6]

Bogdanov and the Vperedists established a Marxist party school on the Italian island of Capri early in 1909, with a view to educating and training ordinary working class Russians as future party leaders, intending the project to be open to adherents of the Bolshevik and Menshevik organizations alike.[4] Pokrovsky was called upon as a party academic to lecture at the Capri school on the topic of Russian history.[4] After Bogdanov's expulsion from the Bolshevik Party in 1909, Pokrovsky followed him out of that organization.[2] He would remain a non-Bolshevik radical until the revolutionary year of 1917, when he returned to Moscow and became a member of the Moscow Soviet of Workers' and Soldiers' Deputies.[2]

The Vperedists in exile established a second Russian party school in Bologna, Italy from 1910 to 1911, again seeking participation from both Bolshevik and Menshevik wings of the Russian Social Democratic Labor Party.[7] Pokrovsky again participated in this project as a history lecturer, being joined by Lunacharsky, Bogdanov, and others.[7] Chief factional leaders Lenin and Georgy Plekhanov were hostile to the project, however, and the Bologna school — and with it the Vpered group itself — subsequently disintegrated.[7]

Years after the October Revolution

Pokrovsky returned to Russia in August 1917, following the February Revolution which overthrew Tsar Nicholas Romanov II.[8] He was formally readmitted to the Bolshevik Party the following month and was soon in a position of trust and authority, editing the daily newspaper of the Moscow Soviet, Izvestiia.[2]

Following the October Revolution which brought the Bolshevik Party to power, Pokrovsky was named as Commissar for Foreign Affairs of the Moscow Soviet.[8] He was also chosen for the commission which drafted the first Constitution of Soviet Russia in 1918 and in March 1918 was elected Chairman of the Council of People's Commissars for the Moscow region.[2]

When former Vperedist Anatoly Lunacharsky was tapped as the first head of the People's Commissariat of Enlightenment (successor to the Russian Ministry of Public Education), Lenin directly suggested to him that his own wife, Nadezhda Krupskaya, and Pokrovsky should be included as prime organizers with Lunacharsky of the new government body.[9] Pokrovsky would become Deputy Commissar of the reformed educational ministry in May 1918, overseeing direction of that body during Lunacharsky's frequent absences from Moscow during the rest of 1918.[10]

Pokrovsky again ran afoul of charges of oppositionism in 1919 when he lent his support to Nikolai Bukharin and the Left Communists in opposition to the Treaty of Brest-Litovsk — a matter of bitter and divisive debate within the Russian Communist Party.[2]

Several Soviet educational entities are credited in some measure to Pokrovsky's influence. These include the "workers' faculties" (rabfaki) established to provide college preparatory education for factory workers to allow their admission to higher education without having graduated from the formal secondary education process.[11] Pokrovsky was also instrumental in the establishment of the Institute of Red Professors (IKP), a de facto graduate school for the advanced training of historians, economists, philosophers, jurists, and natural scientists.[11] He was head of the IKP from 1921 to 1931.[2]

Pokrovsky also was a co-founder of the Russian Association of Social Science Research Institutes (RAION), a sort of think tank which allowed non-Marxist scholars to engage in sociological research projects.[11] Pokrovsky was a consistent advocate of bringing moderate critics of the regime into the educational establishment, unsuccessfully attempting to gain teaching positions at Moscow University for prominent Menshevik intellectuals Iulii Martov and Nikolai Sukhanov.[12]

In 1929, Pokrovsky was elected to the Soviet Academy of Sciences. He achieved his highest position in the Communist Party apparatus the following year, when he was named as a member of the presidium of the Central Control Commission, a disciplinary body elected and sitting in parallel to the governing Central Committee of the Russian Communist Party.[11] Pokrovsky was also a member of the All-Union and All-Russian Central Executive Committees of Soviets,[11] officially non-party bodies which atrophied in importance over time.

In his own historigraphic writing, Pokrovsky emphasized Marxist theory and the brutality of the upper classes in his Russian History from the Most Ancient Times (1910–13), downplaying the role of personality in favor of economics and the class struggle as the driving force of history.

Pokrovsky also wrote a Brief History of Russia, published in 1920 to much acclaim from Vladimir Lenin, who said in the preface to the first edition that he "like[d] the book immensely".

Pokrovsky's death was followed by efforts to marginalize his rejection of a patriotic national history populated by individual heroes and villains, an approach made popular in Soviet history writing in Pokrovsky's four volume work Russian History in Its Most Condensed Form.[15]

In March 1934 the Politburo of the Russian Communist Party took up the question of national history textbooks, with General Secretary Joseph Stalin forcefully opining that Pokrovsky's influence had been decisive in propagating an overly abstract and schematic presentation of national history.[16] Dozens of scholars were put to the task of writing a new standard history textbook in 1934 and 1935.[16] Despite the intense effort, no single book satisfactory to the regime was produced during these years.[16]

In January 1936 another history textbook commission was launched, this chaired by Andrei Zhdanov and including a number of top Communist Party functionaries, including Nikolai Bukharin, Karl Radek, Yakov Yakovlev, and K. Ya. Bauman, among others.[16] In conjunction with the work of this commission, Bukharin authored a lengthy critique of Pokrovsky and his methodology, accusing the deceased historian of mechanistic adherence to abstract sociological formulas, failure to properly understand and apply the dialectic method, and a tendency to depict history in as a crudely universal process.[17] The Zhdanov Commission, in consultation with Stalin, issued an influential communique which categorized historians of the Pokrovsky school as conduits of harmful ideas that were at root "anti-Marxist, anti-Leninist, essentially liquidatorist, and anti-scientific."[18]

Pokrovsky's relentless attack on the Tsarist old regime as a "prison of peoples" and "international gendarme" was henceforth deemed to be anti-patriotic "national nihilism" and a new Russian nationalist historical orthodoxy was established.[19] This new official orthodoxy remained in place for the duration of Stalin's life.[19]

Only after the Soviet leader's death and the subsequent renouncement of his policies by the Communist Party did Pokrovsky's work regain some influence among academic historians in the USSR. Although regarded as a rigid Marxist polemicist by his critics, Pokrovsky is also acknowledged as a "conscientious scholar who would not sacrifice intellectual honesty to the demands of propaganda" by others, leaving his an ambiguous legacy.[20]