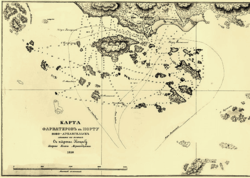 Section of Tebenkov's Sitka Island chart, the place where his Atlas' maps were drawn.

Mikhail Dmitriyevich Tebenkov (Russian: Михаил Дмитриевич Тебеньков; also Tebenkof; 1802 – April 3, 1872) was a Russian hydrographer and vice admiral of the Imperial Russian Navy. He is reputed for having surveyed the then little-known coast of Alaska.

In 1821, Mikhail Tebenkov graduated from the Naval Cadet Corps School and then served on different ships in the Baltic Sea for the next three years. In 1824, Tebenkov was put in charge of logging for shipbuilding purposes near Narva. In January 1825, he joined the Russian American Company and would later command the company-owned brigantines Golovnin, Ryurik, Chichagov, and a sloop named Urup in 1826–1834.

Tebenkov surveyed Norton Sound on behalf of the Russian Imperial Hydrographic Service in 1831 and was the first European to sight the bay that now bears his name. Tebenkof Bay was surveyed by him in 1833 before he returned to St. Petersburg.

In 1835 Tebenkov sailed from Cronstadt back to Alaska via Cape Horn as commander of the Russian American Company's ship Elena. He arrived in Sitka in April 1836.

He was perhaps the most outstanding Russian surveyor of the time, dedicating much time and patient work to the improvement of charts of the Alaskan coast.[1]

His most famous legacy is the Atlas of the Northwest Coasts of America: from Bering Strait to Cape Corrientes and the Aleutian Islands published in 1852. The 39 maps of this atlas were engraved at Sitka by Kozma Terentev (or Terentief), a Russian-Alaskan creole around 1849.[2]

Besides Tebenkof Bay, other geographic features of Alaska, like Tebenkof Glacier, Mount Tebenkof and Point Tebenkof have been named after Captain Mikhail Tebenkov.