Yanshin was born in the city of Yukhnov, located in the present-day Kaluga Oblast.[1] As a young man he worked as a carpenter. In 1919 he volunteered for the Red Army. Following the Russian Civil War, he enrolled at the school of the Moscow Art Theatre, where his classmates included Mikhail Kedrov and Boris Livanov.[2] He joined the theatre's company in 1924 and remained a member of the institution until his death.

Yanshin's first notable roles at the Art Theatre were as Dobchinsky in Gogol's The Government Inspector and as the footman Petrushka in Griboyedov's Woe from Wit. He came to greater attention in the role of Lariosik in Bulgakov's Days of the Turbins, and thereafter began to receive work in other theaters.[3] From 1934 to 1939 he was artistic director of the Moscow Theatre of the Forest Industry; from 1937 to 1941 he directed the Romen Theatre; and from 1950 to 1963 he was chief director of the Stanislavski and Nemirovich-Danchenko Moscow Academic Music Theatre. In 1963 Yanshin was criticized by the Soviet ministry of culture, which disapproved of his staging contemporary, non-traditional plays; he resigned and returned to the Moscow Art Theatre, where he was instrumental in the hiring of the director Oleg Yefremov.

In addition to his theatrical work, Yanshin appeared in many films. He was a frequent voice actor for Soyuzmultfilm cartoons, and often collaborated with the animators Zinaida and Valentina Brumberg. In addition to working as a voice actor, he also wrote the script of the Brumbergs' 1951 film The Night Before Christmas.

Yanshin was married three times.[4] His first wife was Veronika Polonskaya, a fellow artist at the Moscow Art Theatre, whom he married in 1926. She is notable for having pursued an extra-marital affair with the poet Vladimir Mayakovsky, and both she and Yanshin were present when Mayakovsky committed suicide in 1930. They divorced in 1934, and that same year Yanshin married Nadezhda Kiselyova (stage name "Lala Chernoy"), a dancer at the Rumen Theatre. They divorced in 1942, and Kiselyova later married Yanshin's old classmate Nikolai Khmelyov. From 1955 until his death Yanshin was married to Nonna Meyer, a performer at the Stanislavski Theatre.[5]

He died in 1976 in Moscow and was buried at Novodevichy Cemetery. 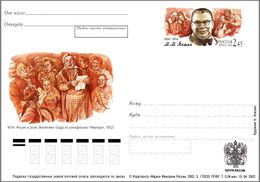 The postal card issued to commemorate the 100th birth anniversary of Mikhail Yanshin. The Russian Post, 2002.