Zoshchenko was born in 1894, in St.Petersburg, Russia, according to his 1953 autobiography. His Ukrainian father was an artist and a mosaicist responsible for the exterior decoration of the Suvorov Museum in Saint Petersburg.[1] His mother was Russian. The future writer attended the Faculty of Law at the Saint Petersburg University, but did not graduate due to financial problems. During World War I Zoshchenko served in the army as a field officer, was wounded in action several times, and was heavily decorated. In 1919, during the Russian Civil War, he served for several months in the Red Army before being discharged for health reasons.

He was associated with the Serapion Brothers and attained particular popularity in the 1920s as a satirist, but, after his denunciation in the Zhdanov decree of 1946, Zoshchenko lived in dire poverty. He was awarded his pension only a few months before he died.

Zoshchenko developed a simplified deadpan style of writing which simultaneously made him accessible to "the people" and mocked official demands for accessibility: "I write very compactly. My sentences are short. Accessible to the poor. Maybe that's the reason why I have so many readers."[3] Volkov compares this style to the nakedness of the Russian holy fool or yurodivy.

Zoshchenko wrote a series of children’s short stories about Lenin. 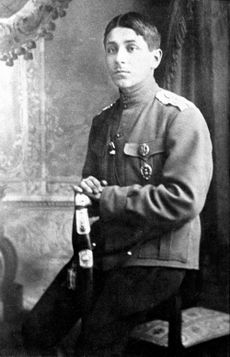