Miles City is a city in and the county seat of Custer County, Montana, United States.[4] The population was 8,410 at the 2010 census. 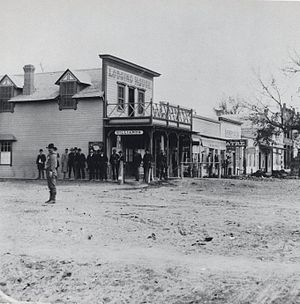 After the Battle of the Little Bighorn in 1876, the U.S. Army created forts in eastern Montana, including one where the north-flowing Tongue River flowed into the east-flowing Yellowstone River. The first fort was known as the Tongue River Cantonment or the Tongue River Barracks and was founded on August 27, 1876. A second, permanent fort was constructed on higher ground two miles to the west of the mouth of the Tongue and this became Fort Keogh.

Fort Keogh (named after Captain Myles Keogh, one of the battle dead, whose horse, Comanche, was the lone survivor of Custer's command) started as a few rough winter cabins, but grew into a moderate sized western fort, from which its commander, General Nelson A. Miles, effectively brought the remaining "uncontrolled" Native Americans into subjugation during the last decade of the 1800s.[5]

Nelson Miles said that "whiskey caused him more trouble than the Indians" and, after tiring of drunken soldiers causing problems during the winter campaign, evicted the sutlers who provided "liquid stock" in the spring of 1877. Moving two miles due east of the Tongue River Cantonment, these early merchants founded the first Miles City. Although fondly referred to as "Milestown," the first post office and first official plat both called the town "Miles City." When the old cantonment moved two miles west, the town literally picked up and followed, moving to the current site. The last occupants of Old Miles City stayed on until 1900 but the new community was the one that grew.

Before the town itself was founded, George Miles, the nephew of General Miles, who had accompanied his uncle on the western expedition and served in the quartermasters office, bought a herd of sheep, the first of many commercial enterprises in his involvement with the core founders of the town.

Livestock speculation brought thousands of cattle to the open ranges in the late 1880s, the railroad was extended through the area, and Texas drove numerous cattle to Miles City to fatten them on free grass and move them to where they could be loaded on trains bound for the slaughterhouses in Chicago.

Miles City established a municipal electric utility around 1887 and it was a source of civic pride (as any city would have towards its own utilities) until a traveling employee of Minnesota Northern Power (predecessor of MDU Resources Group, Inc.) told the city council "the emperor has no clothes;" i.e., the system was far less efficient and in worse shape than they thought. The city council eventually put the question to the voters who instructed the city to sell the utility. By this time, the people with the Montana Power Company (now NorthWestern Energy's Montana division) became aware of this and were soon locked in an epic battle with Minnesota Northern over the franchise. A franchise election was held to determine who would serve Miles City on June 28, 1927. Minnesota Northern won by a scant 16 votes.

Miles City experienced rapid growth until the 1920s and 1930s, but became overshadowed by the upstart upriver town of Billings, which was at the cross roads of transportation routes, and it became a banking center, oil refining center, and medical service center and is now the largest city in the state.

The publicly owned Miles City Municipal Airport is located less than two miles (3 km) from town. Notably, it was the site of an early scheduled airline crash, involving Northwest Airlines Flight 1, which caught fire and crashed shortly after takeoff in January, 1939.

Miles City experiences a semi-arid climate (Köppen BSk) with long, cold, dry winters and hot, wetter summers. The city holds the record for the highest mean sea level pressure in the contiguous United States with a reading of 31.42 inHg (1064 mb) on December 24, 1983.[8]

Guinness World Records reports that the largest natural snowflake ever measured, 15 inches (38 cm) in diameter, was recorded at Fort Keogh on 28 January 1887. However, there is no corroborating evidence to support this claim.[11]

There were 3,677 households of which 27.5% had children under the age of 18 living with them, 42.0% were married couples living together, 10.3% had a female householder with no husband present, 4.3% had a male householder with no wife present, and 43.4% were non-families. 37.2% of all households were made up of individuals and 15% had someone living alone who was 65 years of age or older. The average household size was 2.20 and the average family size was 2.89.

There were 3,528 households out of which 29.7% had children under the age of 18 living with them, 47.7% were married couples living together, 10.8% had a female householder with no husband present, and 37.8% were non-families. 32.3% of all households were made up of individuals and 13.1% had someone living alone who was 65 years of age or older. The average household size was 2.31 and the average family size was 2.93.

The largest event of the year is the Miles City Bucking Horse Sale held in May. Miles City is also home to the Eastern Montana Fair and is the commercial hub of southeastern Montana.[15] The sale is generally held regardless of weather.[16][17]

Custer County District High School is the only high school in the entire county; some students drive as many as 60 miles (97 km) to school. Much of the population's livelihood involves agriculture - entirely or in part; therefore, the National FFA Organization (Future Farmers of America) organization is very active and about 20% of the student population belong to it. The school is famous for its Chorale, which travels extensively including a trip to Carnegie Hall in NYC in 2005 and a trip to Washington D.C. in 2007. The school boasts that its seniors have an average ACT score of 23 and that 57% of the graduating seniors go on to complete their education at a 4-year university.

Woodruff Park provides picnic opportunities in the Pine Hills east of town on the road to Baker (Hwy 12). Spotted Eagle recreation area provides picnic, fishing, swimming, and hiking. Also on the Baker road, but much closer to town, just past the Interstate, are the Strawberry Hills, good for short hikes and climbs. The highest point in the vicinity is Signal Butte (3,051 feet / 929.94 meters above sea level), said to have been used by native Americans for communication, but used for decades by radio and sometimes TV antennas. Signal Butte lies at the edge of an area of badlands, a striking arid vista of eroded sedimentary soil, sporting multi-colored layers exposed by the erosion. The land contains sandstone formations in the midst of sagebrush and cedar trees growing in a soil that turns to gumbo when wet. Airport Hill is the elevated bluff of the north bank of the Yellowstone River, and Paragon Pit is a remote area of the north bank opposite of Fort Keogh frequented by teenagers over the years. 12 Mile Dam spans the Tongue River and attracts teens in the summer for water sport. Being shallow, the Tongue River is often used for tubing. The former Fort Keogh once boasted an Air Force radar station and still houses a state Extension Experiment Station. Across the highway is the site of a state fish hatchery, and nearby, a double humped butte is known locally as "Camelback". Miles City lies at the mouth of the north flowing Tongue River as it empties into the eastward flowing Yellowstone River. Both rivers are fished regularly, but yield mostly catfish, carp and a junk fish known locally as "shiners". Many local reservoirs are stocked with edible fish from the hatchery in Miles City. 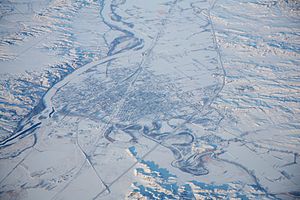 Aerial photograph of Miles City from the southwest