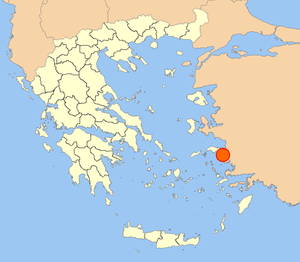 Location of Miletus on the western coast of Anatolia, home to Thales, Anaximander, and Anaximenes

The Milesian school was a school of thought founded in the 6th century BC. The ideas associated with it are exemplified by three philosophers from the Ionian town of Miletus, on the Aegean coast of Anatolia: Thales, Anaximander, and Anaximenes. They introduced new opinions contrary to the prevailing viewpoint on how the world was organized, in which natural phenomena were explained solely by the will of anthropomorphized gods. The Milesians presented a view of nature in terms of methodologically observable entities, and as such was one of the first truly scientific philosophies.

Note: It is important to make a distinction between the Milesian school and the Ionian, which includes the philosophies of both the Milesians and other distinctly different Ionian thinkers such as Heraclitus. See also Pre-Socratic philosophy.

These philosophers defined all things by their quintessential substance (which Aristotle, perhaps being anachronistic,[1] called the ἀρχή / arche)[2] of which the world was formed and which was the source of everything. Thales thought it to be water.[3] But as it was impossible to explain some things (such as fire) as being composed of this element, Anaximander chose an unobserved, undefined element, which he called apeiron[4] (ἄπειρον "having no limit"). He reasoned that if each of the four traditional elements (Water, Air, Fire, and Earth) are opposed to the other three, and if they cancel each other out on contact, none of them could constitute a stable, truly elementary form of matter. Consequently, there must be another entity from which the others originate, and which must truly be the most basic element of all. The notion of temporal infinity was familiar to the Greek mind in the religious conception of immortality and Anaximander's description was in terms appropriate to this conception.This arche is called "eternal and ageless"(Hippolitus I,6,I;DK B2). The unspecified nature of the apeiron upset critics, which caused Anaximenes to define it as being air, a more concrete, yet still subtle, element.[5] Anaximenes held that by its evaporation and condensation, air can change into other elements or substances such as fire, wind, clouds, water, and earth. However, our modern concept of energy is much more similar to Anaximander's apeiron.

The differences between the three philosophers was not limited to the nature of matter. Each of them conceived of the universe differently. Thales held that the Earth was floating in water. Anaximander placed the Earth at the center of a universe composed of hollow, concentric wheels filled with fire, and pierced by holes at various intervals, which appeared as the sun, the moon, and the other stars. For Anaximenes, the sun and the moon were flat disks traveling around a heavenly canopy, on which the stars were fixed.