From Infogalactic: the planetary knowledge core
Jump to: navigation, search
This article is about the award named the "Military Medal". For other uses, see military decoration.

The Military Medal (MM) was (until 1993) a military decoration awarded to personnel of the British Army and other services, and formerly also to personnel of other Commonwealth countries, below commissioned rank, for bravery in battle on land.

The medal was established on 25 March 1916.[2] It was the other ranks' equivalent to the Military Cross (MC), which was awarded to commissioned officers and, rarely, to warrant officers, although WOs could also be awarded the MM. The MM ranked below the Distinguished Conduct Medal (DCM), which was also awarded to non-commissioned members of the Army.[3]

Recipients of the Military Medal are entitled to use the post-nominal letters "MM".[4] Over 115,000 awards were made for actions during the First World War. Additionally, over 5,700 bars were awarded, as well as 180 second bars. There was one instance of a third bar being awarded;[4] this was made to Private Ernest Albert Corey, who served as a stretcher bearer in the Australian 55th Infantry Battalion, which served on the Western Front.[5] During the Second World War, over 15,000 awards of the MM were made.[4] The decoration has occasionally been bestowed upon non British or Commonwealth subjects, and has also been awarded to some civilians, with the first such awards being made to two female civilians for actions during the Easter Rising in 1916.[4]

In 1993, the Military Medal was discontinued. Since then the Military Cross has been awarded to personnel of all ranks within the British honours system.[5] Several Commonwealth nations, such as Australia, New Zealand and Canada, have established their own honours systems in the post Second World War era and now award their own gallantry decorations.[5][6][7]

The medal and ribbon had the following features:[3][4]

Notable recipients of the Military Medal 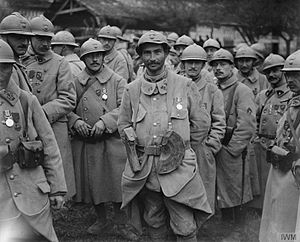 French soldiers, after having been awarded the Military Medal, Battle of the Somme 1916

Over 135,000 people have been awarded the Military Medal. Among the more notable recipients are:

In Soldier Soldier broadcast on ITV, at the 50th D Day Anniversary, Robson Green's character, Fusilier Dave Tucker, gets a veteran called Jack Knight talking, who subsequently turns out to be a recipient of the Military Medal.

In the Dad's Army episode Branded, the platoon discover that the character Private Godfrey, was a Conscientious Objector. He is then ostracized by the platoon until they find that he won the Military Medal in the First World War whilst serving in the Royal Army Medical Corps. The medal itself is central to the storyline in that it is higher than all the medals held by the rest of the platoon and is seen as a mark of true heroism which earns him great respect from them all.

In ANZAC Girls episode 6, "Courage", Sister Ross-King and three other nurses are awarded the Military Medal for bravery under fire.