The Military Order of St. Henry (Militär-St. Heinrichs-Orden) was a military order of the Kingdom of Saxony, a member state of the German Empire. The order was the oldest military order of the states of the German Empire. It was founded on October 7, 1736 by Augustus III, King of Poland and Elector of Saxony. The order underwent several more revisions over the course of the 19th and early 20th centuries. It became obsolete with the fall of the Saxon monarchy in the wake of Germany's defeat in World War I.[1]

The badge of the order was a gold Maltese cross with white-enameled edges. Around the center medallion was a blue-enameled gold ring bearing on the obverse the words "FRIDR•AUG•D•G•REX•SAX•INSTAURAVIT" and on the reverse the motto "VIRTUTI IN BELLO" ("Bravery in War"). On the obverse, the medallion was yellow-enameled with a painted portrait of St. Henry, the last Saxon Holy Roman Emperor. On the reverse, the medallion bore the Saxon coat of arms (alternating horizontal black and gold stripes with a diagonal rue crown). Between the arms of the cross were green-enameled rue crowns, a symbol of Saxony. The badge was suspended from a royal crown. The Grand Cross was larger than the Commander's Cross, and the Commander's Cross was larger than the Knight's Cross.[3]

The star of the order, awarded with the Grand Cross and the Commander 1st Class, was a silver eight-pointed star featuring a larger version of the medallion with St. Henry of the obverse of the cross, but with the text of the ring of the reverse. The star was slightly larger for the Grand Cross.[4]

The ribbon of the order was light blue with yellow stripes near each edge. 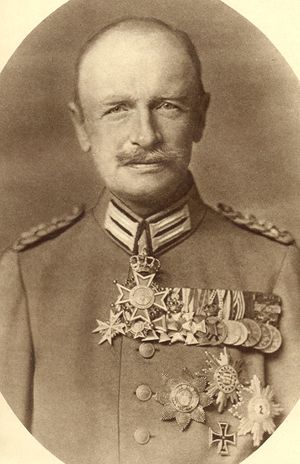 King Friedrich August III, wearing a special version of the Grand Cross as a neck badge, the breast star on his left chest, and the Knight's Cross on his medal bar.