The Military William Order, or often named Military Order of William (Dutch: Militaire Willems-Orde, abbreviation: MWO), is the oldest and highest honour of the Kingdom of the Netherlands. The Order's motto is Voor Moed, Beleid en Trouw (For Bravery, Leadership and Loyalty). The chivalric order was established on 30 April 1815 by King William I and was presented for feats of excellent bravery on the battlefield and as a meritorious decoration to senior military officers. Comparable with the French Légion d’Honneur but far less awarded, the Military William Order is a chivalry order of merit open to everyone regardless of rank and nobility, and not only to Dutch military but also foreigners. To date the Order is extremely rarely awarded and only for excellent bravery in battle. 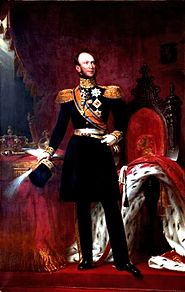 King William II as Sovereign of the Order

Most knighthoods of the Military Order of William were awarded in 1815 and shortly afterwards to military of the Allies that fought Napoleon at the Battle of Waterloo, in total over 1,000 knighthoods were awarded at this time. The Grand Cross was awarded to Prince William of Orange, the Duke of Wellington, Fürst Blücher von Wahlstatt, Graf von Bülow von Dennewitz and Graf von Gneisenau.

During the 19th century the Military William Order was awarded to military serving in the campaign against the Belgian Revolution and military serving in the Netherlands East Indies, mostly in the Aceh War. Until 1940, a total of 5,874 persons had been awarded the Military Order of William. In 1940, the Order was awarded to soldiers who had served with extreme valour in the defence of Netherlands from the 10 May attack by Nazi-Germany. In 1944 and 1945, with the liberation of the Netherlands from German occupation, the Military William Order was again awarded, this time to Netherlands citizens as well as members of the Allied Forces for deeds of gallantry. Of the 3,500 servicemen who served in the Netherlands United Nations Detachment in Korea, three servicemen – two posthumously – were admitted to the Order. Since 1940, 199 names have been added to the register of the Military Order of William. The latest conflict that has been cause for the honour to be awarded is the ongoing war in Afghanistan.

By 1945, the following classes of the Military William Order were in existence.

The Grand Cross could also be awarded as an exceptional presentation to heads of state which had displayed feats of loyalty to the Netherlands during wartime. Only US President Franklin Delano Roosevelt and the British King George VI of The Netherlands were conferred such an honour. In the 19th century, the Grand Cross was often conferred on foreign monarchs as a mere mark of respect.

The 4th Class could also be awarded as a unit presentation to military commands which had displayed feats of gallantry during wartime. 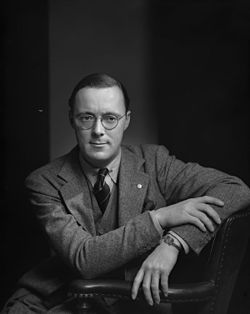 The badge of the Order is a white-enamelled Maltese Cross, in silver for the 4th Class and in gilt for higher classes; a green enamelled Burgundy Cross appears between the arms of the Maltese Cross. The obverse bears a golden firesteel at the centre, and the motto Voor Moed – Beleid – Trouw (For Bravery – Leadership – Loyalty) on the arms of the Maltese Cross. Both the Burgundy Cross and the firesteel were symbols of the House of Valois-Burgundy during their lordship of the Netherlands and probably are meant to recall its crucial unifying role in the history of the Netherlands. The reverse central disc bears a crowned monogram "W" (for King William I) surrounded by a laurel wreath. The badge hangs from a royal crown.

The star of the Grand Cross is a silver, 8-pointed star with straight rays; the obverse of the badge of the Order, minus the crown, appears at its centre.

The breast cross of the Commander is completely identical to the obverse of the badge of the Order.

The ribbon of the Order is orange (Royal House of Orange) with blue (Nassau-blue) stripes near the border.

The oath to be taken by the accolade to the Military Order of William states: "I swear that I shall conduct myself as a faithful and valiant Knight, to stand ever ready to defend King and Country with my Life, and with all my Powers to always strive to be worthy of this Distinction, which the King has bestowed upon me. So help me God almighty." 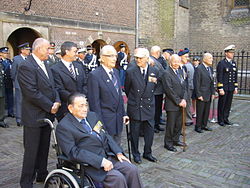 Six knights of the Military William Order at the Binnenhof (The Hague, The Netherlands) on 29 May 2009.

As of February 2015, only four knights of the Military William Order are still alive; two are more than 90 years old. Below a list of the names of the living knights, in order of the order being awarded. Between brackets the date when they were inducted into the Order:

Members of the Military William Order are awarded certain privileges: