The State of Vatican City is an enclave country which lies entirely within Rome, the capital of Italy. The responsibility for defending the state from an aggressor lies primarily with the Italian Armed Forces. Vatican City has within its territory the Pontifical Swiss Guard or Swiss Guard. The Swiss Guard is a small force maintained by the Holy See and is responsible for the safety of the Pope, including the security of the Apostolic Palace. It controls access to the entrances to the city-state together with the Corps of Gendarmerie of Vatican City, a civilian force maintained by Vatican City. Ever since it was founded in 1929 Vatican City has never been at war and has only seen anything close to military action when it was bombed during World War II.

Historically, a number of other military units existed in the territory of Vatican City State with ceremonial rather than military duties. The Noble Guard and the Palatine Guard were abolished by Pope Paul VI in 1970. 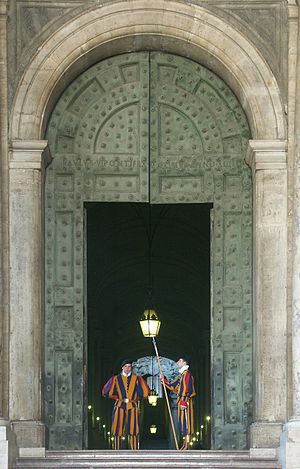 Swiss Guard at the Bronze Door

The Corps of the Pontifical Swiss Guard or Swiss Guard (Ger: Schweizergarde, Ital. Guardia Svizzera Pontificia, Lat. Pontificia Cohors Helvetica or Cohors Pedestris Helvetiorum a Sacra Custodia Pontificis) is a small force responsible for the safety of the Pope, including the security of the Apostolic Palace. During the periods of "sede vacante" (which is when there is no pope), the Swiss Guard instead guards the College of Cardinals, so as to ensure that the Cardinals, meeting in Conclave, are able to perform their duty in electing a new Pope.

Like various European powers, earlier Popes recruited Swiss mercenaries as part of an army. The Pontifical Swiss Guard was founded by Pope Julius II on 22 January 1506 as the personal bodyguard of the Pope and continues to fulfil that function.[1] It is listed in the Annuario Pontificio under "Holy See", not under "State of Vatican City".[2] At the end of 2005, the Guard had 134 members. Recruitment is arranged by a special agreement between the Holy See and Switzerland. All recruits must be Catholic, unmarried males with Swiss citizenship who have completed their basic training with the Swiss Army with certificates of good conduct, be between the ages of 19 and 30,[3] and be at least 175 cm (5 ft 9 in) in height. Members are armed with small arms and the traditional Halberd (also called the Swiss voulge),[4] and trained in bodyguarding tactics.[5]

Since 1970, the Pontifical Swiss Guard has been the only active military in Vatican City. The officers' rank markings illustrated here are those of the Swiss Guard. The Chaplain of the Guard ranks as a Lieutenant Colonel. The Commandant (who holds the rank of Colonel) is a senior member of the Papal Household, and his personal coat of arms or emblem appears at the centre of the standard of the Swiss Guard for the duration of his command.

List of former military units owing allegiance to the Pope