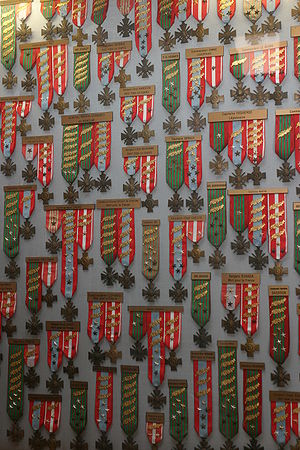 Wall of Medals in the French Foreign Legion Museum

A military decoration is an award, usually a medal of some sort that consists of a ribbon and medallion given to an individual as a distinctively designed mark of honor denoting heroism, or meritorious or outstanding service or achievement.[1] While the United States Government does not consider all its military awards and medals as being "decorations", other countries tend to refer to all their military awards and medals as "decorations".

Decorations have been known since ancient times. The Egyptian Old Kingdom had the Order of the Golden Collar while the New Kingdom awarded the Order of the Golden fly.[2] Celts and Romans wore a torc or received other military decorations such as the hasta pura, a spear without a tip. Dayaks wore and still wear tattoos, etc. Necklaces and bracelets were given during the early Middle Ages, evolving into richly jewelled big necklaces, often with a pendant (commonly a medal) attached.

One of the oldest military decorations still in use is Poland's War Order of Virtuti Militari (Latin for "For Military Valour"). It was first awarded in 1792.

Medals have been forged by many people to make the medal appear more valuable or to make one look like a more decorated soldier. Medal forgeries can include: Adding bars, engraving a famous soldiers name on it or creating a whole new medal. Medal forgery is illegal in most countries and can be punishable by jail time.

In most NATO militaries, only the service ribbons are normally worn on everyday occasions (as opposed to the actual medals).