From Infogalactic: the planetary knowledge core
Jump to: navigation, search
Not to be confused with military reserve.

A military reserve force is a military organization composed of citizens of a country who combine a military role or career with a civilian career. They are not normally kept under arms and their main role is to be available to fight when a nation mobilizes for total war or to defend against invasion. Reserve forces are generally not considered part of a permanent standing body of armed forces. The existence of reserve forces allows a nation to reduce its peacetime military expenditures while maintaining a force prepared for war. It is analogous to the historical model of military recruitment before the era of standing armies.

In other countries, such as Finland, Taiwan, South Korea, Singapore, Colombia and Israel, service in the reserves is compulsory for a number of years after one has completed their national service.

A military reserve force is different from a reserve formation, sometimes called a military reserve, which is a group of military personnel or units not committed to a battle by their commander so that they are available to address unforeseen situations, bolster defenses, or exploit opportunities. 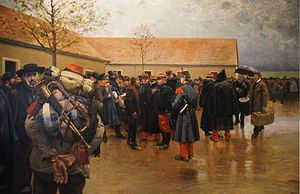 Reservists responding to the call, at the beginning of the Franco-Prussian War (1870).

During the eighteenth century some nations' military systems included practices and institutions that functioned effectively as a reserve force, even if they were not specifically designated as such. For example, the half-pay system in the British Army during the eighteenth century provided the British state with a force of trained, experienced officers not on active duty during peacetime but available for call-up during wartime. The Militia Act of 1757 effectively gave Britain at least somewhat of an institutional structure for a reserve force. Although contemporaries debated the effectiveness of the British militia, its embodiment (i.e., mobilization) during several conflicts did increase Britain's strategic options by freeing up regular forces for overseas theaters.

Historically reservists first played a significant role in Europe after the Prussian defeat in the Battle of Jena-Auerstedt. On 9 July 1807 in the Treaties of Tilsit, Napoleon I forced Prussia to drastically reduce its military strength, in addition to ceding large amounts of territory. The Prussian army could no longer be stronger than 42,000 men.

The Krumpersystem, introduced to the Prussian Army by the military reformer Gerhard von Scharnhorst, arranged for giving recruits a short period of training, which in the event of war could be considerably expanded. With this the reduction of the army's strength did not have the desired effect, and in the following wars Prussia was able to draw up a large number of trained soldiers. The system was retained by the Imperial German Army into the First World War. By the time of the Second Reich reservists were already being given so-called "war arrangements" following the completion of their military service, which contained exact instructions relating to the conduct of reservists in time of war. 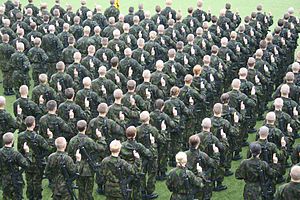 In some countries, for example the United States, reservists are often former military members who reached the end of their enlistment or resigned their commission. Indeed, service in the reserves for a number of years after leaving active service is required in the enlistment contracts and commissioning orders of many nations.

Reservists can also be civilians who undertake basic and specialized training in parallel with regular forces while retaining their civilian roles. They can be deployed independently or their personnel may make up shortages in regular units. United Kingdom's Army Reserve is one example of such a reserve.

With universal conscription, most of the male population may be reservists. In Finland, all men belong to the reserve until 60 years of age, and 80% of each age cohort are drafted and receive at least six months of military training. Ten percent of conscripts are trained as reserve officers. Reservists and reserve officers are occasionally called up for refresher exercises, but receive no monthly salary or position. South Korean males who finish their national service in the armed forces or in the national police are automatically placed on the reserve roster, and are obligated to attend a few days of annual military training for seven years.

Reserves are used and employed in many ways. In wartime they may be used to provide replacements for combat losses to in-action units and formations, thus allowing these to remain battle-worthy longer. They can also be used to form new units and formations to augment the regular army. In addition, reservists can undertake tasks such as garrison duty, manning air defence, internal security and guarding of important points such as supply depots, prisoner of war camps, communications nodes, air and sea bases and other vital areas, thus freeing up regular troops for the front. A combination of these can be used.

In peacetime, reservists can be utilised in internal security duties and disaster relief, sparing reliance on the regular military forces, and in many countries where military roles outside of warfare are restricted, reservists are specifically exempted from these restrictions.

The term "reserve officer" has two different meanings. In the U.S., it refers mostly to retired officers of the standing army that are still eligible for military duty. In countries with universal conscription, it refers to conscripts that receive extra training to qualify for officer duty in the event of war, but in peacetime concentrate on their civilian career and receive no pay or position from the military. For example, 10% of Finnish conscripts attain a reserve officer rank after completion of one year of service.

One of the primary advantages in having military reserves is that they increase the available manpower by many fold in a short period of time, unlike the months it would take to train new recruits or conscripts, since reservists are already trained. Reservists are often experienced combat veterans which can increase not only the quantity, but the overall quality of the forces. Having a large reservist pool can allow a government to avoid the costs, both political and financial, of requiring new recruits or conscripts. The reservists are usually more economically effective than regular troops, as they are only called up when they are most needed. On the other hand, preparations made to institute a call up (which are obvious to adversaries) can be used as a display of determination. Reservists are also many times trained professionals in the civilian side. The skills attained in many professions are also many times useful in the military side. Furthermore, in many countries reserves have also very capable people who would not consider career in the military. They take voluntary training as their hobby, and are therefore very cheap to train. People considering reservist activity as their hobby tend to be very motivated unlike many professionals. In peacekeeping, the skills of reservists have been shown to be valuable, because they can be employed for reconstruction of infrastructure, and so tend to have better relations with the civilian population than pure career soldiers.

Reservists are usually provided with second line equipment, which is no longer used by the regulars, or is an older version of that in current service. Reservists will also have little experience with the newer weapon systems. Reservists in the sense of retired services personnel are sometimes considered to be less motivated than regular troops. Meanwhile, reservists in the sense of civilians who combine a military career with a civilian one, as in the United Kingdom's Territorial Army (TA), (now called the Army Reserve), experience demands on time not experienced by regular troops, and which affects their availability and duration of service. Conducting of exercises involving reservists is expensive, requiring compensation for lost wages, and it is difficult to call up then demobilise reservists again and again, which means that a nation that has called up reservists may be reluctant to stand them down again until the conflict is resolved. This is particularly true in the case of reservists in the sense of retired personnel, less true in the case of a standing force (e.g., the TA). In the prelude to World War I, the reluctance of the various antagonists to demobilise reserves once called up, due to the difficulty of remobilisation has been held up as one of the causes why the diplomatic phase escalated so quickly to war.

Soviet Union made the largest use of reserves in both senses during the World War II, having separate and distinct military reserve force formations that included not only conscription reserves of lower readiness category cadre units, but also including the use of military reserves—reserve Armies and even a Front that constituted the reserve of the High Command.