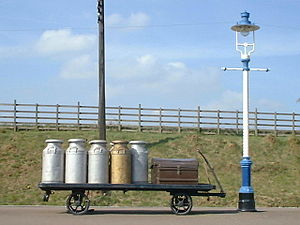 Milk churns on a railway platform 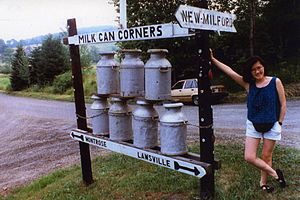 A milk churn is a tall, conical or cylindrical container for the transportation of milk.[1] It is sometimes referred to as a milk can.

Milk was originally distributed in 'pails', a lidded bucket with a handle. Often two pails would be carried on either end of a wooden yoke. Once the railways started carrying milk, the pail proved less than ideal as it was top-heavy and tended to spill. Dairy farmers used a tall conical wooden container - a butter churn - to 'churn' the milk into butter, and this proved to be preferable for the railways to transport. It held a lot more milk (about seventeen gallons) and its conical shape made it less likely to spill or topple over. These wooden churns were intrinsically heavy, and starting in the 1850s a steel version was introduced and soon became the standard. The usage of the word 'churn' was retained for describing these containers, although they were not themselves used for 'churning' butter.

As with British Railway Milk Tank Wagons, the milk churn was a standard size; the older galvanised iron conical type held 17 gallons, whilst the cylindrical type with the mushroom-shaped lid introduced in the 1930s held ten gallons. Each churn carried a brass plate near the top to identify the owning company and when full it would have a white paper label (tied to the handle on the lid of the conical type and to the side handle of the cylindrical type), which was used for accounting purposes by the creamery or dairy.[2]