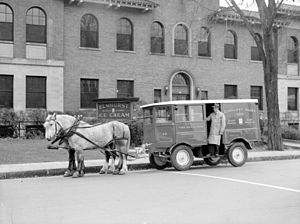 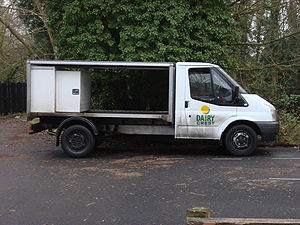 In British English, a milk float is a vehicle specifically designed for the delivery of fresh milk. Today, milk floats are usually battery electric vehicles (BEV), but they were formerly horse-drawn. They were once common in many European countries, particularly the United Kingdom, and were operated by local dairies. However, in recent years, as the number of supermarkets, small independent grocers and petrol stations, and convenience stores stocking fresh milk has increased, most people have switched from regular home delivery to obtaining fresh milk from these other sources.

Because of the relatively small power output from its electric motor, a milk float travels fairly slowly, usually around 10 to 16 miles per hour (16 to 26 km/h) although some have been modified to do up to 80 mph (130 km/h).[1] Operators often exit their vehicle before they have completely stopped to speed up deliveries; milk floats generally have sliding doors that can be left open when moving, or may have no doors at all. Electric milk floats come in three wheel and four wheel versions, the latter normally larger. They are very quiet, suiting operations in residential areas during the early hours of the morning or during the night.

Most electric milk floats do not have seat belts, and the law in the United Kingdom only requires wearing seat belts where these are fitted in the vehicle. While there was previously an exemption in the law meaning those making local deliveries were not required to wear a seat belt, which would in theory have included drivers and passengers in milk floats with seat belts fitted, the law was changed in 2005 to deliveries less than 50 metres (160 ft) apart.[2]

In August 1967, the UK Electric Vehicle Association put out a press release stating that Britain had more battery-electric vehicles on its roads than the rest of the world put together[3] It is not clear what research the association had undertaken into the electric vehicle populations of other countries, but closer inspection disclosed that almost all of the battery driven vehicles licensed for UK road use were milk floats.[3]

Glasgow has one of the largest working milk float fleets in the UK. Most of the vehicles operate from the Grandtully Depot in Kelvindale. Some dairies in the UK, including Dairy Crest, have had to modernise and have replaced their electric milk floats with petrol or diesel fuel-powered vehicles to speed up deliveries and thus increase profit.

Manufacturers of milk floats in Britain in the 20th century included Morrison-Electricar, Smith's, Wales & Edwards, Osborne, Harbilt, Brush, Bedford and British Leyland. In 1941, Morrison-Electricar standardised three types of body which would become the basis for thousands of milk floats built after the war to deliver goods to the recovering population.[4] As of 2009, only Bluebird Automotive[5] remained in the industry.

During 2012, Bluebird Automotive will be launching a new generation of milk float. Called the BE-1, it is a city delivery vehicle with a 1.7 metric tonne payload. It incorporates battery swapping so that flat batteries can be replaced with fully charged batteries at a depot in around four minutes.

Before BEVs, dairy supplies were delivered using horse-drawn milk floats. This lasted from the late 19th century until the 1950s.[6] Today, with rounds expanding in coverage to ensure profitability in the face of falling levels of patronage, the limited range and speed of electric milk floats have resulted in many being replaced by diesel-powered converted vans.

A collection of milk floats and other BEVs is kept by the Birmingham and Midland Motor Omnibus Trust at their museum, and in addition several milk floats are still in service today, albeit repurposed after their milk delivery days. Many are used for work in factories, or as pleasure vehicles in rural areas, and some are hired out.