From Infogalactic: the planetary knowledge core
(Redirected from Minesweeper (ship))
Jump to: navigation, search
For other uses, see Minesweeper (disambiguation). 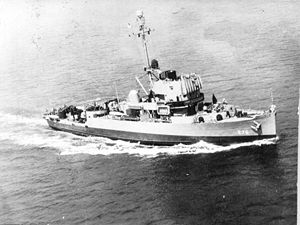 A minesweeper is a small naval warship designed to engage in minesweeping. Using various mechanisms intended to counter the threat posed by naval mines, waterways are maintained clear for safe shipping.[1]

Although naval warfare has a long history, the earliest known usage of the naval mine dates to the Ming Dynasty Chinese.[2] Dedicated minesweepers, however, only appear in the historical record several centuries later, to the Crimean War, where they were deployed by the British. In that war, minesweepers consisted of British rowboats trailing grapnels to snag the mines. Despite the use of mines in the American Civil War, there are no records of effective minesweeping being used.[3] Officials in the Union Army attempted to create the first minesweeper but were plagued by flawed designs and abandoned the project.[4] Minesweeping technology picked up in the Russo-Japanese War, using aging torpedo boats as minesweepers.

In Britain, naval leaders recognized before the outbreak of World War I that the development of sea mines was a threat to the nation's shipping and began efforts to counter the threat. Sir Arthur Wilson noted the real threat of the time was blockade aided by mines and not invasion. The function of the fishing fleet's trawlers with their trawl gear was recognized as having a natural connection with mine clearance and, among other things, trawlers were used to keep the English Channel clear of mines.[5] A Trawler Section of the Royal Navy Reserve became the predecessor of the mine sweeping forces with specially designed ships and equipment to follow. These reserve Trawler Section fishermen and their trawlers were activated, supplied with mine gear, rifles, uniforms and pay as the first minesweepers.[6] The dedicated, purpose-built minesweeper first appeared during World War I with the Flower-class minesweeping sloop. By the end of the War, naval mine technology had grown beyond the ability of minesweepers to detect and remove.[3]

Minesweeping made significant advancements during World War II. Combatant nations quickly adapted ships to the task of minesweeping, including Australia's 35 civilian ships that became Auxiliary Minesweepers.[7] Both Allied and Axis countries made heavy use of minesweepers throughout the war. Historian Gordon Williamson wrote that "Germany's minesweepers alone formed a massive proportion of its total strength, and are very much the unsung heroes of the Kriegsmarine."[8] Naval mines remained a threat even after the war ended, and minesweeping crews were still active after VJ Day.[9] After the Second World War, allied countries worked on new classes of minesweepers ranging from 120-ton designs for clearing estuaries to 735-ton oceangoing vessels.[10] The United States Navy even used specialized Mechanized Landing Craft to sweep shallow harbors in and around North Korea.[11]

As of June 2012[update], the U.S. Navy had four minesweepers deployed to the Persian Gulf to address regional instabilities.[12][13] 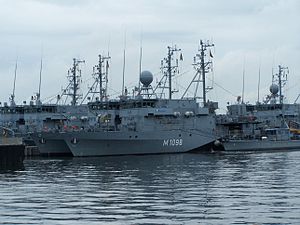 Siegburg, a modern Ensdorf-class minesweeper of the German Navy

Minesweepers are equipped with mechanical or electrical devices, known as "sweeps", for disabling mines. The modern minesweeper is designed to reduce the chances of it detonating mines itself; it is soundproofed to reduce its acoustic signature and often constructed using wood, fiberglass or non-ferrous metal, or is degaussed to reduce its magnetic signature.[14]

Mechanical sweeps are devices designed to cut the anchoring cables of moored mines, and preferably attach a tag to help the subsequent localization and neutralization. They are towed behind the minesweeper, and use a towed body (e.g. oropesa, paravane) to maintain the sweep at the desired depth and position. Influence sweeps are equipment, often towed, that emulate a particular ship signature, thereby causing a mine to detonate. The most common such sweeps are magnetic and acoustic generators.

There are two modes of operating an influence sweep: MSM (mine setting mode) and TSM (target simulation mode or target setting mode). MSM sweeping is founded on intelligence on a given type of mine, and produces the output required for detonation of this mine. If such intelligence is unavailable, the TSM sweeping instead reproduces the influence of the friendly ship that is about to transit through the area. TSM sweeping thus clears mines directed at this ship without knowledge of the mines. However, mines directed at other ships might remain.[15] [16]

The minesweeper differs from a minehunter; the minehunter actively detects and neutralises individual mines. Minesweepers are in many cases complementary to minehunters, depending on the operation and the environment; a minesweeper is, in particular, better suited to clearing open-water areas with large numbers of mines. Both kinds of ships are collectively called mine countermeasure vessels (MCMV), a term also applied to a vessel that combines both roles. The first such ship was HMS Wilton, also the first warship to be constructed from fiberglass.