From Infogalactic: the planetary knowledge core
Jump to: navigation, search
Not to be confused with Chinese calendar. 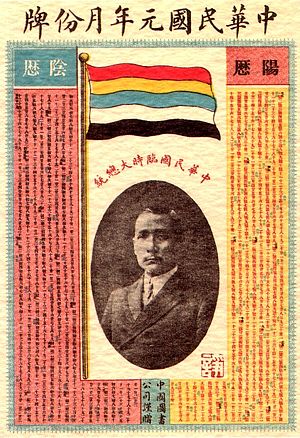 A calendar that commemorates the first year of the Republic as well as the election of Sun Yat-sen as the provisional President.

Following the Chinese imperial tradition of using the sovereign's era name and year of reign, official ROC documents use the Republic (traditional Chinese: 民國; simplified Chinese: 民国; pinyin: Mínguó; Wade–Giles: Min-kuo; literally: "The Country of the People") system of numbering years in which the first year was 1912, the year of the founding of the Republic of China. For example, 2021 is the 110th "year of the Republic". Months and days are numbered according to the Gregorian calendar.

Despite the adoption of the Gregorian calendar, the numbering of the years was still an issue. Chinese imperial tradition was to use the emperor's era name and year of reign. One alternative to this approach was to use the reign of the half-historical, half-legendary Yellow Emperor in the third millennium BC to number the years. In the early 20th century, some Chinese Republicans began to advocate such a system of continuously numbered years, so that year markings would be independent of the Emperor's regnal name. (This was part of their attempt to delegitimize the Qing Dynasty.)

When Sun Yat-sen became the provisional president of the Republic of China, he sent telegrams to leaders of all provinces and announced the 13th day of 11th Month of the 4609th year of the Yellow Emperor's reign (corresponding to 1 January 1912) to be the first year of the Republic of China. The original intention of the Mínguó calendar was to follow the imperial practice of naming the years according to the number of years the Emperor had reigned, which was a universally recognizable event in China. Following the establishment of the Republic, hence the lack of an Emperor, it was then decided to use the year of the establishment of the current regime. This reduced the issue of frequent change in the calendar, as no Emperor ruled more than 61 years in Chinese history — the longest being Kangxi Emperor who ruled from 1662–1722 (Kangxi 61). (Qianlong Emperor abdicated in 1795, i.e. Qianlong 60, but the reign name of Qianlong is still used unofficially until his death in 1799 i.e. Qianlong 64.)

Based on Chinese National Standard CNS 7648: Data Elements and Interchange Formats—Information Interchange—Representation of Dates and Times (similar to ISO 8601), year numbering may use the AD system as well as the ROC era. For example, 3 May 2004 may be written 2004-05-03 or ROC 93-05-03.

The ROC era numbering happens to be the same as the numbering used by the Juche calendar of North Korea, because its founder, Kim Il-sung, was born in 1912. The years in Japan's Taishō period (30 July 1912 to 25 December 1926) also coincide with those of the ROC era.

In addition to the ROC's Mínguó calendar, Taiwanese continue to use the lunisolar Chinese calendar for certain functions such as the dates of many holidays, the calculation of people's ages, and religious functions.

The use of the ROC era system extends beyond official documents. When used to mark expiration dates on products for export, they can be misunderstood as having an expiration date 11 years earlier than intended.[1] Misinterpretation is more likely in the cases when the prefix (ROC or 民國) is omitted.

There have been legislative proposals by pro-Taiwan Independence political parties, such as the Democratic Progressive Party to abolish the Republican calendar in favor of the Gregorian calendar.[2]

Relation to the Gregorian calendar

Generally, the ROC era is obtained by subtracting 1911 from the Gregorian calendar year.

Since the release of Java 8, the Minguo calendar is supported in the new Date and Time API.