From Infogalactic: the planetary knowledge core
Jump to: navigation, search
Not to be confused with mining geology. 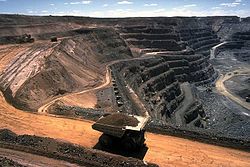 Surface coal mine with haul truck in foreground

Mining engineering is an engineering discipline that involves the practice, the theory, the science, the technology, and application of extracting and processing minerals from a naturally occurring environment. However, mining engineering is associated with many other sister department within like geology, mineral processing and metallurgy, geotechnical engineering, surveying. A mining engineer manages all phases of mining operations – from exploration and discovery of the mineral resource, through feasibility study, mine design, development of plans, production and operations to mine closure.

With the process of Mineral extraction, some amount of waste and uneconomic material are generated which are the primary source of pollution in the vicinity of mines. Mining activities by their nature cause a disturbance of the natural environment in and around which the minerals are located. Mining engineers must therefore be concerned not only with the production and processing of mineral commodities, but also with the mitigation of damage to the environment both during and after mining as a result of the change in the mining area.

From prehistoric times to the present, mining has played a significant role in the existence of human race. Since the beginning of civilization people have used stone and ceramics and, later, metals found on or close to the Earth's surface. These were used to manufacture early tools and weapons. For example, high quality flint found in northern France and southern England were used to set fire and break rock.[1] Flint mines have been found in chalk areas where seams of the stone were followed underground by shafts and galleries. The oldest known mine on archaeological record is the "Lion Cave" in Swaziland. At this site, which radiocarbon dating indicates to be about 43,000 years old, paleolithic humans mined mineral hematite, which contained iron and was ground to produce the red pigment ochre.[2][3]

The ancient Romans were innovators of mining engineering. They developed large scale mining methods, perhaps most notably the use of large volumes of water brought to the minehead by numerous aqueducts for hydraulic mining. The exposed rock was then attacked by fire-setting where fires were used to heat the rock, which would be quenched with a stream of water. The thermal shock cracked the rock, enabling it to be removed. In some mines the Romans utilized water-powered machinery such as reverse overshot water-wheels. These were used extensively in the copper mines at Rio Tinto in Spain, where one sequence comprised 16 such wheels arranged in pairs, lifting water about 80 feet (24 m).[4]

Black powder was first used in mining in Banská Štiavnica, Kingdom of Hungary (present-day Slovakia) in 1627.[5] This allowed blasting of rock and earth to loosen and reveal ore veins, which was much faster than fire-setting. The Industrial Revolution saw further advances in mining technologies, including improved explosives and steam-powered pumps, lifts, and drills as long as they remained safe.

According to a Survey,[6] it seems that Mining Engineers in India are earning relatively high salaries in comparison to many other professions. The average salary for a Mining Engineer in India is $15,250. However, the salaries are always highly determined by the level of skill, where the organisation is based and which organisation you are working for. In comparison to salaries of Mining Engineer’s working in other regions, such as Canada, the United States, Australia and the United Kingdom, the salaries are dismal, however when comparing salaries from one region to another, there are many factors that need to be taken into consideration, such as the cost of living etc.In the United States, there are an estimated 6,630 employed mining engineers. The mean yearly salary for a mining engineer in the U.S. is $90,070 .[7]

The foremost stage of mining starts with the process of finding and exploration of the mineral deposit. In the initial process of mineral exploration, however, the role of geologists and surveyors is prominent in the pre-feasibility study of the future mining operation. Mineral exploration and estimation of reserve through various prospecting methods are done to determine the method and type of mining in addition to profitability condition.

Mining engineers are involved in the mineral discovery stage by working with geologists to identify a mineral reserve. The first step in discovering an ore body is to determine what minerals to test for. Geologists and engineers drill core samples and conduct surface surveys searching for specific compounds and ores. For example, a mining engineer and geologist may target metallic ores such as galena for lead or chalcopyrite for copper. A mining engineer may also search for a non-metal such as phosphate, quartz, or coal.

The discovery can be made from research of mineral maps, academic geological reports or local, state, and national geological reports. Other sources of information include property assays, well drilling logs, and local word of mouth. Mineral research may also include satellite and airborne photographs. Unless the mineral exploration is done on public property, the owners of the property may play a significant role in the exploration process, and may be the original discoverer of the mineral deposit.[8]

After a prospective mineral is located, the mining engineer then determines the ore properties. This may involve chemical analysis of the ore to determine the composition of the sample. Once the mineral properties are identified, the next step is determining the quantity of the ore. This involves determining the extent of the deposit as well as the purity of the ore.[9] The engineer drills additional core samples to find the limits of the deposit or seam and calculates the quantity of valuable material present in the deposit.

Once the mineral identification and reserve amount is reasonably determined, the next step is to determine the feasibility of recovering the mineral deposit. A preliminary study shortly after the discovery of the deposit examines the market conditions such as the supply and demand of the mineral, the amount of ore needed to be moved to recover a certain quantity of that mineral as well as analysis of the cost associated with the operation. This pre-feasibility study determines whether the mining project is likely to be profitable; if it is then a more in-depth analysis of the deposit is undertaken. After the full extent of the ore body is known and has been examined by engineers, the feasibility study examines the cost of initial capital investment, methods of extraction, the cost of operation, an estimated length of time to payback, the gross revenue and net profit margin, any possible resale price of the land, the total life of the reserve, the total value of the reserve, investment in future projects, and the property owner or owners' contract. In addition, environmental impact, reclamation, possible legal ramifications and all government permitting are considered.[10][11] These steps of analysis determine whether the mine company should proceed with the extraction of the minerals or whether the project should be abandoned. The mining company may decide to sell the rights to the reserve to a third party rather than develop it themselves, or the decision to proceed with extraction may be postponed indefinitely until market conditions become favorable.

Mining engineers working in an established mine may work as an engineer for operations improvement, further mineral exploration, and operation capitalization by determining where in the mine to add equipment and personnel. The engineer may also work in supervision and management, or as an equipment and mineral salesperson. In addition to engineering and operations, the mining engineer may work as an environmental, health and safety manager or design engineer.

The act of mining required different methods of extraction depending on the mineralogy, geology, and location of the resources. Characteristics such as mineral hardness, the mineral stratification, and access to that mineral will determine the method of extraction.

Generally, mining is either done from the surface or underground. Mining can also occur with both surface and underground operations taking place on the same reserve. Mining activity varies as to what method is employed to remove the mineral.

Surface comprises 90% of the world's mineral tonnage output. Also called open pit mining, surface mining is removing minerals in formations that are at or near the surface. Ore retrieval is done by material removal from the land in its natural state. Surface mining often alters the land characteristics, shape, topography, and geological make-up.

Surface mining involves quarrying which is excavating minerals by means of machinery such as cutting, cleaving, and breaking. Explosives are usually used to facilitate breakage. Hard minerals such as limestone, sand, gravel, and slate are generally quarried into a series of benches.

Strip mining is done on softer minerals such as clays and phosphate are removed through use of mechanical shovels, track dozers, and front end loaders. Softer Coal seams can also be extracted this way.

With placer mining, minerals can also be removed from the bottoms of lakes, rivers, streams, and even the ocean by dredge mining. In addition, in-situ mining can be done from the surface using dissolving agents on the ore body and retrieving the ore via pumping. The pumped material is then set to leach for further processing. Hydraulic mining is utilized in forms of water jets to wash away either overburden or the ore itself.[12]

Explosives are used to break up a rock formation and aid in the collection of ore in a process called blasting. Blasting utilizes the heat and immense pressure of the detonated explosives to shatter and fracture a rock mass. The type of explosives used in mining are high explosives which vary in composition and performance properties. The mining engineer is responsible for the selection and proper placement of these explosives, in order to maximize efficiency and safety. Blasting occurs in many phases of the mining process, such as development of infrastructure as well as production of the ore.

Legal attention to Mining Health and Safety began in the late 19th century and in the subsequent 20th century progressed to a comprehensive and stringent codification of enforcement and mandatory health and safety regulation. A mining engineer in whatever role they occupy must follow all federal, state, and local mine safety laws.

Main article: Mine Safety and Health Act of 1977

This comprehensive Act provides miners with rights against retaliation for reporting violations, consolidated regulation of coal mines with metallic and nonmetallic mines, and created the independent Federal Mine Safety and Health Review Commission to review MSHA's reported violations.[13]

Mining and the environment

A mining engineer may be involved at the end of the mine life cycle when mine reclamation operations are planned and carried out. They also decide how to close a mine that has ceased operations to keep the public safe.

Land reclamation is regulated for surface and underground mines according to the Surface Mining Control and Reclamation Act of 1977. The law creates as a part of the Department of Interior, the Bureau of Surface Mining (OSM). OSM states on their website, “OSM is charged with balancing the nation’s need for continued domestic coal production with protection of the environment.”

The law requires that states set up their own Reclamation Departments and legislate laws related to reclamation for coal mining operations. The states may impose additional regulations and regulate other minerals in addition to coal for land reclamation.[16]