From Infogalactic: the planetary knowledge core
(Redirected from Minister-President)
Jump to: navigation, search

A minister-president or minister president is the head of government in any of a number of European countries or subnational governments, in which a parliamentary or semi-presidential system of government prevails, who presides over the council of ministers. It is an alternative term for prime minister, premier, chief minister or first minister, and very similar to the title of President of the Council.

The German word Ministerpräsident means "president of the ministers". The designation "minister-president" is less frequently used in English; often politicians holding titles that literally correspond to "minister-president" are referred to in English as premiers (typically at the subnational level) or prime ministers (typically at the national level).

The term minister-president (Dutch: minister-president, French: ministre-président, German: Ministerpräsident) is also used in Belgium to describe the head of government of a Belgian region or linguistic community, but not the head of the Belgian federal government who is referred to as the prime minister (Dutch: eerste minister, French: premier ministre, German: Premierminister).

According to the Belgian constitution, the federal prime minister is appointed by the king, and approved by the federal parliament with a vote of confidence (in practice the king usually appoints the leader of the winning party as "formateur" to form a government). The federal ministers later swear an oath of allegiance to the king. The ministers-president of the regions and linguistic communities are not appointed by the king, but are directly appointed by their respective parliament. Ministers of the regions and linguistic communities are not required to swear allegiance to the king but simply take an oath in their respective parliament. 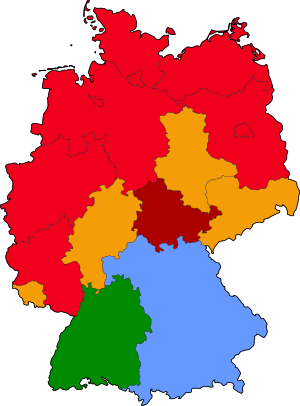 The title is commonly translated as "prime minister"[1] or "(State) Premier"; whereas "minister-president"[2][3] or less often "minister president" is used in official business in order not to confuse the incumbent with a head of government of a nation-state.

The constitutional position of a minister-president is comparable to the one of chancellor at the federal level.

Ministers-president of the German states are elected by their respective state parliaments and appoint ministers in their respective states (in six states the appointment of ministers is also subject to parliamentary approval), and determine policy guidelines.[4] Along with several of their ministers, they commonly represent their state in the Bundesrat (the German Federal Council) or abroad. By virtue of their position in the Bundesrat, they can exert considerable influence on national politics within the federal structure. The office of the minister-president is called Staatskanzlei (state chancellery) in all non-city-states except Baden-Württemberg, where it is called Staatsministerium (ministry of state).

In the case of the three German city-states -- Berlin, Bremen, and Hamburg -- the head of the state government is not called a Ministerpräsident but goes by a different title, viz. Regierender Bürgermeister (Governing Mayor of Berlin), Bürgermeister und Präsident des Senats (Mayor and President of the Senate of Bremen), and Erster Bürgermeister (First Mayor) of Hamburg. Their office is called Senatskanzlei (senate chancellery). Despite this difference in terminology, however, the heads of government of these city-states hold the same power and position as the ministers-president of the other German states.

In the Netherlands the prime minister is officially referred to as "minister-president", although the term "premier" is more commonly used. His responsibilities are defined in the constitution of 1848 (president of the council of ministers). The title of minister-president has been in official use since 1945.

In Norway, Vidkun Quisling, head of the collaborationist government from 1942 to 1945 during the German occupation in World War II, held the title of Minister-President (in Norwegian, ministerpresident).

In Spain, the head of government is known as "presidente del gobierno" or President of the Government but in English, he is more commonly referred to as the prime minister.