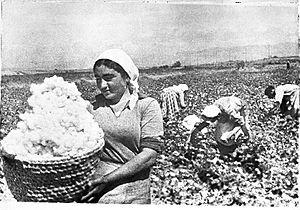 Cotton picker from Armenian Soviet Socialist Republic, between 1930 and 1940

The Soviet Ministry of Agriculture and Food was established in 1929 and known prior to 1946 as the People's Commissariat for Agriculture - Narkomzem).

The Narkomzem offices located at Orlikov Pereulok, 1, Moscow were designed by Aleksey Shchusev in 1928. This building is currently occupied by the Ministry of Agriculture of the Russian Federation.

Despite having signed the 1972 Biological Weapons Convention (BWC), the Soviet Union continued development and mass production of offensive biological weapons. These activities were conducted by a main directorate — "Biopreparat" — along with the Ministry of Agriculture and Food and several other Soviet ministries and agencies (Ministry of Defense, Ministry of Health, USSR Academy of Sciences, the KGB, etc.).[2] In the 1980s, the Ministry of Agriculture successfully developed variants of foot-and-mouth disease and rinderpest against cows, African swine fever for pigs, and psittacosis to kill chicken. These agents were prepared to be sprayed down from tanks attached to airplanes over hundreds of miles. The secret program was code-named "Ecology".[3]