The Ministry of Finance of the Union of Soviet Socialist Republics (USSR) (Russian: Министерство финансов СССР), formed on 15 March 1946, was one of the most important government offices in the Soviet Union. Until 1946 it was known as the People's Commissariat for Finance (Russian: Народный комиссариат финансов – Narodnyi komissariat finansov, or "Narkomfin"). Narkomfin, at the all-Union level, was established on 6 July 1923 after the signing of the Treaty on the Creation of the USSR, and was based upon the People's Commissariat for Finance of the Russian Soviet Federative Socialist Republic (RSFSR) formed in 1917. The Ministry was led by the Minister of Finance, prior to 1946 a Commissar, who was nominated by the Chairman of the Council of Ministers and then confirmed by the Presidium of the Supreme Soviet. The minister was a member of the Council of Ministers.

During the Russian Civil War, and immediately afterwards, the Commissariat usually confiscated property to support government operations. Following a short period of stability after the civil war the Commissariat introduced several governmental taxes on the population. The commissariat's structure differed little from its Tsarist predecessor, the only notable difference was that the Soviet ministry was very centralised while the Tsarist's finance ministry was a very decentralised one. The Commissariat, and later the Ministry, prepared the state budget in a joint process with its republican and local branches. The Ministry's structure went through few changes due to the Soviet government's conservative approaches to change. Soviet leader Mikhail Gorbachev introduced several reforms during his rule which had the unintended consequence of considerably hurting the ministry's prestige.

File:Narkmomfinfoto2.jpg
The Narkomfin Building was built to house employees of the Commissariat for Finance[1]

The Ministry's predecessor, the People's Commissariat for Finance of the Russian Soviet Federative Socialist Republic (RSFSR), was established by a decree of the second convocation of the All-Russian Congress of Soviets on 8 November [O.S. 26 October] 1917 and was part of the Sovnarkom. The first Commissar was Ivan Skvortsov-Stepanov appointed in 1917. However, following the introduction of the New Economic Policy, Narkomfin was made responsible for Gosbank,[2] the State Bank of the RSFSR and then the State Bank of the Soviet Union. On 26 November 1921 Lenin issued a note calling for the appointment of Grigory Sokolnikov to the newly established post of People's Commissar for Finance. Sokolnikov took control of the organisation in 1922, although his formal position was not ratified until November 1922.[3] In 1946 the Council of People's Commissars was renamed the Council of Ministers and the People's Commissariat for Finance was renamed as the Ministry of Finance.[4][5]

In 1928 the Soviet government launched a building program headed by the OSA group. The OSA group oversaw the construction of a building which should have housed the employees of the People's Commissariat for Finance. Due to its close connections with the Commissariat for Finance the building was often referred to as "the Narkomfin building". The building was designed by Moisei Ginzburg and Ignati Milinis and has a reputation for being one of the best examples of still-standing Soviet constructivist architecture.[6] The architects tried to give the building a collective feel to it but, when the building was finished in 1932, it was denounced as a remnant of "leftist utopianism" by Joseph Stalin's regime. Unlike many other Soviet constructivist buildings there is an ongoing campaign to save it.[6]

When Alexei Kosygin, the Chairman of the Council of Ministers, initiated the 1965 economic reform the Ministry of Finance sabotaged the reform by not fully implementing it which, along with many other reasons, helped the reform to fail.[7]

During the formation of the Soviet state, in the late 1910s and early 1920s, the People's Commissariat for Finance of the Russian Soviet Federative Socialist Republic (RSFSR) was created. The commissariat did not differ greatly from that of Imperial Russia's Ministry of Finance and its system. The Soviet finance ministry was a heavily centralised structure, while its predecessor was not.[8] During its humble beginnings, the main task of the People's Commissariat of Finance were: confiscation of property, robbery and requisition; printing and creating money; and taxation.[9]

In the immediate aftermath of the October Revolution, and during the Russian Civil War, the Soviet government forcibly confiscated property to support their government. After the inflation of the 1920s printing of money nearly ceased and confiscation of goods became harder; after years of confiscating there was simply not enough property left to fund government operations anymore. After the civil war the confiscation of property ceased and several government taxes were introduced.[9] The ministry's tasks were summed up in the 1971 charter: "The USSR Ministry of Finance prepares the draft of the USSR State Budget and bears responsibility for the fulfilment of the USSR State Budget, both for receipts and for expenditures [...]". Under the rule of Mikhail Gorbachev the Ministry lost much of its power. An example being that before 1990 all foreign trade investments had to be approved by the Ministry of Finance but in 1990 the ministries of finance of the Union republics approved foreign investment.[10] The ministry was of vital importance and in the 1971 charter the Soviet government gave the ministry broad legislative power. As nearly all organisations had some sort of financial aspects the Ministry of Finance set standards and rules for accounting and bookkeeping. It also had the power to issue regulations for the detailed application of the tax legislation. This is also a common feature in the United States Department of Treasury, although the Soviet's regulations differ in being of a highly centralised manner that the US one does not. The Ministry of Finance usually exercised its powers jointly with other government agencies.[11] The 1971 charter states that the Ministry of Finance had the right to participate with the State Committee on Prices for price-setting in the USSR, but it also participated in the setting of salaries and the fulfillment of the five-year plans with the State Planning Committee and the State Bank of the USSR (Gosbank).[12]

The finance ministry started the budget preparation process by preparing instructions, forms and schedules for the upcoming state budget and prepared a preliminary balance of revenues and expenditures using data estimated by the State Planning Committee (Gosplan). This preliminary budget was then sent, together with instructions, to the all-Union ministries and ministries of finance of the Union's republics. The Union branches of the Ministry of Finance then prepared a budget estimate with information received from the lower Union ministries and information given to them by the all-Union Ministry of Finance. The state budget was conceived after the Union Ministry negotiated a compromise with its republican and local branches and each Soviet republic was given its own state budget. The Economic Committees of the Supreme Soviet voted on the state budget which, if it received enough support, would become policy.[13]

There were several Deputy Ministers of Finance, each of them focusing their responsibility in one specific area, for example the financial regulation of the Soviet automobile industry.

There were two departments in the Ministry of Finance, both of which were highly centralised but were sometimes subjected to direct control by the local CPSU Party Control Committees. The two departments had their own distinctive budget. The Head of the Department of Revisory Control was recommended by the Minister of Finance and approved by the Council of Ministers, the Head of the Department of Revisory Control for the Union republics was recommended by the republic's Minister of Finance and the Council of Ministers.[14]

The Department of Revisory Control of the Ministries of Finance of the Union Republics: Controlled the implementation of the national budget of the republican Ministries of Finance and their local counterparts. The department also exercised control over enterprises and institutions directly subordinate to the Soviet government.[16] The Department of Budget was a department which took part in drafting the budget of the Soviet Republics.[17] 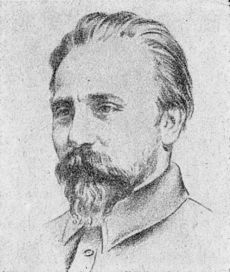 One of the Soviet Narkoms of Finance, Nikolai Bryukhanov, arrested and executed in 1938, during the Great Purge

The following persons headed the Commissariat/Ministry as commissars (narkoms), ministers, and deputy ministers:[18][19]