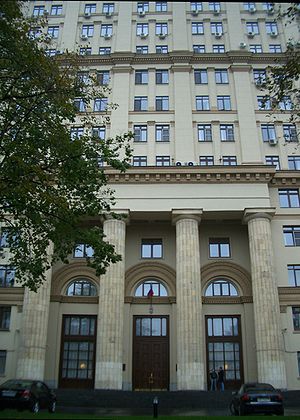 Ministry of Medium Machine-Building Industry of the USSR (Russian: Министерство среднего машиностроения СССР - Минсредмаш СССР, МСМ СССР) was one of the central offices in the Soviet Union, established by Decree of the Presidium of the Supreme Soviet of 26 June 1953, who supervised the Soviet nuclear industry, including production of nuclear warheads.

The basis of the ministry was established since September 1942 the First Chief Directorate (nuclear industry), the Third Chief Directorate (development in the area controlled missiles, aircraft, rockets and long range missiles) of the Council of Ministers of the USSR and the Central Board of Industrial Building of the Ministry of Internal Affairs of the USSR (Главпромстрой МВД) charged with construction of nuclear installations.

On September 11, 1989 the Ministry of Medium Machine Building was renamed into the Ministry of Atomic Energy and Industry of the USSR (Министерство атомной энергетики и промышленности СССР).

Ministry headquarters was located in Moscow in the building at Bolshaya Ordynka St. (Большая Ордынка) 24-26, currently occupied by the corporation Rosatom. In Soviet times, the phone book did not indicate the address of the Ministry.

The ministry was led by various Soviet politicians: