From Infogalactic: the planetary knowledge core
Jump to: navigation, search
File:DDR Verteidigungsminister Kfz-Flagge.svg
Flag of the Ministry of National Defence

The Ministry of National Defense (German: Ministerium für Nationale Verteidigung - MfNV) was the chief administrative arm of the East German National People's Army. The MND was modeled on that of the Soviet Union. The headquarters of the Ministry was in Strausberg, East Berlin. The Hugo Eberlein Guard Regiment provided security and guard services to the Ministry. The Ministry also had its own publishing house, Verlag des Ministeriums für Nationale Verteidigung. 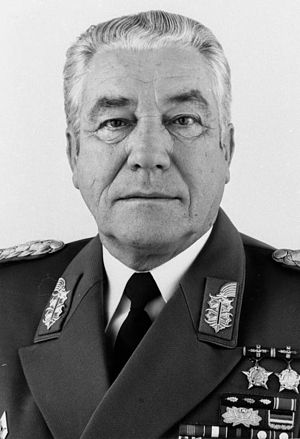 The Minister of National Defence was assisted by a colloquium of deputy ministers who were also chiefs of certain key administrations within the ministry.

In 1987 the deputy ministers and their assignments were as follows:

File:Bundesarchiv Bild 183-U1007-0049, Rostock, 30. Jahrestag DDR-Gründung, Flottenparade.jpg
Wilhelm Ehm, middle, at a Fleet parade for the 30th Anniversary of the German Democratic Republic in 1979.

Main article: History of the Volkspolizei

On January 18, 1956, the People's Chamber (the national legislature) passed a bill creating the NVA and the Ministry of Defense from the Chief Administration of Training of the Ministry of the Interior. This act formally acknowledged the existence of East Germany's armed forces. The NVA incorporated the Kasernierte Volkspolizei or KVP, Sea Police, and Air Police into a single armed force having three branches: ground, naval, and air. The Ministry of Defense was headed by Colonel General (Generaloberst) Willi Stoph, who was also minister of the interior. In 1987 Stoph was chairman of the Council of Ministers and a member of the SED Politburo. General Hoffmann, who was listed as first deputy minister of defense, attended the Soviet General Staff Academy in the mid-1950s and replaced Stoph as defense minister in 1960. Hoffmann held the post until his death in 1985. Concurrent with the establishment of the NVA as a legal entity was a return to public manifestations of German military traditions, with the addition of socialist elements. The training regimen for recruits approximated that of the former Wehrmacht, as did drill and ceremonies. New uniforms, whose cut but not colour (stone grey) were far closer to those of German World War II forces than to Soviet models, were introduced. Only the helmet represented a radical departure from World War II, but here too the design differed from the Soviet model.

The creation of the NVA addressed both internal and external security problems. Internally the physical appearance of the NVA spoke to the population in terms of their traditional German heritage and differentiated the NVA from the Soviet Army. In theory at least, East German citizens could have pride in their own army. The swift creation of the NVA as a force of more than 120,000 officers and other ranks practicing Prussian-style drill was a dramatic gesture of nationalism that was impossible for the world to ignore.

The creation of the Ministry of Defense and the NVA seemingly should have been a blow to the authority and prestige of the Ministry of the Interior. The bureaucratic impact of this action was mitigated by permitting Stoph to carry both portfolios for four years. In addition, police activities, both civil and secret, remained under the Ministry of the Interior, as did the Border Police. The Ministry of the Interior established its own Alert Units for the specific function of internal security. The Alert Units were militarily structured, fully motorized units with modern weapons and equipment. Garrisoned and trained in battalion-size units, they were capable of carrying out police tasks and other security functions. They have been used in major disturbances or in civil disasters affecting public order and safety.

Differentiation between the Ministry of Defense and the Ministry of the Interior was still in progress in the 1960s. On issue in this process was the subordination of the Border Police. On September 15, 1961, by order of the National Defense Council, the entire Border Police was transferred to the NVA and redesignated the Border Troops of the NVA. Various explanations for this shift have been offered by different authorities. The official reason stressed improvement in the level of training through closer relationship with the NVA and provision for reinforcement of the Border Troops with other NVA assets. The actual reason probably had more to do with standardization within the Warsaw Pact since similar reorganizations occurred in roughly the same time period in all the non-Soviet Warsaw Pact armies.

In the mid-1980s, its complement of about 4,200 personnel had a military-to-civilian ratio of approximately three to one, in contrast to comparable Western ministries or departments that generally have a much higher proportion of civilian employees.

The Ministry of National Defense had the following subordinate executive bodies:

The predecessor of the command Air Force / Air Defense (LSK / LV) was created in 1956 for government air force and air defense. A year later, the administrations for the joint command LSK / LV-based Eggersdorf was established.

The governing bodies still belonged to the Ministry Headquarters, the political headquarters and the areas of Bereiche Rückwärtige Dienste (Rear services) and Technik und Bewaffnung (equipment and armament).

The heads of the commands and the other governing bodies were usually also titled Deputy Minister of National Defense.

The MfNV has concluded agreements with almost all other ministries of the so-called GDR secret agreements. This agreement marked the prominent position of the NVA. Content of these agreements was the preferred treatment of the army in the food issue, to entering and use of forests and open spaces in the GDR.