Offices of all members are located in the State Office Building, connected by tunnel just to the west of the Capitol. It is where most House committee meetings are held.

Following the ratification of the Nineteenth Amendment in 1920, women were eligible for election to the Minnesota Legislature. In 1922, Mabeth Hurd Paige, Hannah Kempfer, Sue Metzger Dickey Hough and Myrtle Cain were elected to the Minnesota House of Representatives.[1]

Each Senate district is divided in half and given the suffix A or B (for example, House district 32B is geographically within Senate district 32). Members are elected for two-year terms.[2] Districts are redrawn after the decennial United States Census in time for the primary and general elections in years ending in 2. The most recent election was held on November 4, 2014. 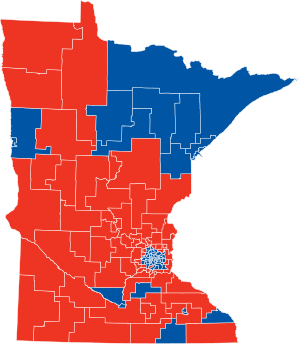 *Elected in a special election.[5]
†Elected to non-consecutive terms.[6]