From Infogalactic: the planetary knowledge core
Jump to: navigation, search
"Planetoid" redirects here. For the comic book, see Planetoid (comics).
Not to be confused with Dwarf planet.

A minor planet is an astronomical object in direct orbit around the Sun that is neither a planet nor exclusively classified as a comet.[lower-alpha 1] Minor planets can be dwarf planets, asteroids, trojans, centaurs, Kuiper belt objects, and other trans-Neptunian objects.[1] The orbits of 692,604 minor planets were archived at the Minor Planet Center by 2015.[2] The first minor planet to be discovered was Ceres in 1801.

The term minor planet has been used since the 19th century to describe these objects.[3] The term planetoid has also been used, especially for larger (planetary) objects such as those the International Astronomical Union (IAU) has called dwarf planets since 2006.[4][5] Historically, the terms asteroid, minor planet, and planetoid have been more or less synonymous.[4][6] This terminology has become more complicated by the discovery of numerous minor planets beyond the orbit of Jupiter, especially trans-Neptunian objects that are generally not considered asteroids.[6] Minor planets seen releasing gas may be dually classified as a comet.

Hundreds of thousands of minor planets have been discovered within the Solar System and thousands more are discovered each month. The Minor Planet Center has made over 142 million observations; 701,660 are registered as minor planets, and 455,144 have orbits known well enough to be assigned permanent official numbers.[2][9] Of these, 19,712 have official names.[2] As of December 2015, the lowest-numbered unnamed minor planet is (3708) 1974 FV1.[10] As of December 2015, the highest-numbered named minor planet is 439718 Danielcervantes.[11]

There are various broad minor-planet populations: 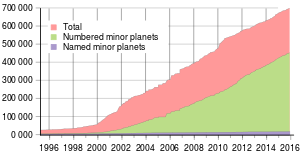 Only very few minor planets are named. The vast majority is either numbered or still has a provisional designation (blue).[17]

All astronomical bodies in the Solar System need a distinct designation. The naming of minor planets runs through a three-step process. First, a provisional designation is given upon discovery—because the object still may turn out to be a false positive or become lost later on—called a provisionally designated minor planet. After the observation arc is accurate enough to predict its future location, a minor planet is formally designated and receives a number. It is then a numbered minor planet. Finally, in the third step, it may be named by its discoverers. However, only a small fraction of all minor planets have been named. The vast majority is either numbered or has still only a provisional designation. Example of the naming process:

A newly discovered minor planet is given a provisional designation. For example, the provisional designation 2002 AT4 consists of the year of discovery (2002) and an alphanumeric code indicating the half-month of discovery and the sequence within that half-month. Once an asteroid's orbit has been confirmed, it is given a number, and later may also be given a name (e.g. 433 Eros). The formal naming convention uses parentheses around the number, but dropping the parentheses is quite common. Informally, it is common to drop the number altogether, or to drop it after the first mention when a name is repeated in running text.

Minor planets that have been given a number but not a name keep their provisional designation, e.g. (29075) 1950 DA. Because modern discovery techniques are finding vast numbers of new asteroids, they are increasingly being left unnamed. The earliest discovered to be left unnamed was for a long time (3360) 1981 VA, now 3360 Syrinx; as of September 2008, this distinction is held by (3708) 1974 FV1. On rare occasions, a small object's provisional designation may become used as a name in itself: the still unnamed (15760) 1992 QB1 gave its "name" to a group of objects that became known as Classical Kuiper belt objects ("cubewanos").[18]

Minor planets are awarded an official number once their orbits are confirmed. With the increasing rapidity of discovery, these are now six-figure numbers. The switch from five figures to six figures arrived with the publication of the Minor Planet Circular (MPC) of October 19, 2005, which saw the highest numbered minor planet jump from 99947 to 118161.[2]

The first asteroid to be given a non-mythological name was 20 Massalia, named after the Greek name for the city of Marseille.[19] The first to be given an entirely non-Classical name was 45 Eugenia, named after Empress Eugénie de Montijo, the wife of Napoleon III. For some time only female (or feminized) names were used; Alexander von Humboldt was the first man to have an asteroid named after him, but his name was feminized to 54 Alexandra. This unspoken tradition lasted until 334 Chicago was named; even then, female names show up in the list for years after.

As the number of asteroids began to run into the hundreds, and eventually in the thousands, discoverers began to give them increasingly frivolous names. The first hints of this were 482 Petrina and 483 Seppina, named after the discoverer's pet dogs. However, there was little controversy about this until 1971, upon the naming of 2309 Mr. Spock (the name of the discoverer's cat). Although the IAU subsequently banned pet names as sources,[20] eccentric asteroid names are still being proposed and accepted, such as 4321 Zero, 6042 Cheshirecat, 9007 James Bond, 13579 Allodd and 24680 Alleven, and 26858 Misterrogers.

A well-established rule is that, unlike comets, minor planets may not be named after their discoverer(s). One way to circumvent this rule has been for astronomers to exchange the courtesy of naming their discoveries after each other. An exception to this rule is 96747 Crespodasilva, which was named after its discoverer, Lucy d'Escoffier Crespo da Silva, because she died shortly after the discovery, at age 22.[21][22]

Names were adapted to various languages from the beginning. 1 Ceres, Ceres being its Anglo-Latin name, was actually named Cerere, the Italian form of the name. German, French, Arabic and Hindi use forms similar to the English, whereas Russian uses a form, Tserera, similar to the Italian. In Greek the name was translated to Δήμητρα (Demeter), the Greek equivalent of the Roman goddess Ceres. In the early years, before it started causing conflicts, asteroids named after Roman figures were generally translated in Greek; other examples are Ἥρα (Hera) for 3 Juno, Ἑστία (Hestia) for 4 Vesta, Χλωρίς (Chloris) for 8 Flora, and Πίστη (Pistis) for 37 Fides. In Chinese, the names are not given the Chinese forms of the deities they are named after, but rather typically have a syllable or two for the character of the deity or person, followed by 神 'god(dess)' or 女 'woman' if just one syllable, plus 星 'star/planet', so that most asteroid names are written with three Chinese characters. Thus Ceres is 谷神星 'grain goddess planet',[23] Pallas is 智神星 'wisdom goddess planet', etc.[citation needed]

Commission 15[24] of the International Astronomical Union is dedicated to the Physical Study of Comets & Minor Planets.

Archival data on the physical properties of comets and minor planets are found in the PDS Asteroid/Dust Archive.[25] This includes standard asteroid physical characteristics such as the properties of binary systems, occultation timings and diameters, masses, densities, rotation periods, surface temperatures, albedoes, spin vectors, taxonomy, and absolute magnitudes and slopes. In addition, European Asteroid Research Node (E.A.R.N.), an association of asteroid research groups, maintains a Data Base of Physical and Dynamical Properties of Near Earth Asteroids.[26]