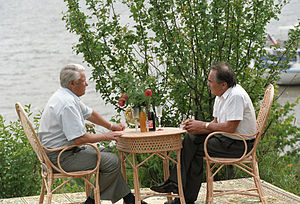 With President Boris Yeltsin in 1994

Shaimiev was born in the village of Anyakovo, in Aktanyshsky District of the Tatar ASSR. He graduated from the Kazan Agricultural Institute in 1959, and worked as an agricultural engineer. He joined the Communist Party in 1963. In 1967 he was an instructor and deputy head of the agricultural department at Tatarstan's regional party organization. In 1969 Shaimiev was appointed Minister for Amelioration and Water Economy of his republic and in 1983 he became the first deputy chair of the Tatar Council of Ministers. In September 1989 Shaimiev became first secretary of Tatarstan's Communist Party organization. In the same year he was elected to the USSR Congress of Peoples's Deputies. In April 1990 he was elected speaker of Tatarstan's Supreme Soviet. On August 31, 1990, the Supreme Soviet proclaimed the sovereignty of Tatarstan. On June 12, 1991, Shaimiev was elected President of the Tatar Soviet Socialist Republic and as President issued a declaration during the attempted coup of August 1991 in Moscow supporting the position of the Emergency Committee. In March 1992 he held a referendum on Tatarstan's sovereignty during which 62 percent of the voters cast their ballots in favor of sovereignty. In 2001, he and Moscow's Mayor Yuri Luzhkov founded the United Russia party.[2]

Saying that he wanted to make way for a new generation of leadership—in accordance with a call from President Dmitry Medvedev—Shaimiev told Medvedev in January 2010 that he did not want to be nominated for another term as President of Tatarstan. He said that Rustam Minnikhanov, the Prime Minister of Tatarstan, was his preferred successor.[3] Medvedev then nominated Minnikhanov to succeed Shaimiev on January 27, 2010.[4]