Mirosław Hermaszewski (born September 15, 1941) is a retired Polish Air Force officer and cosmonaut. He became the first (and to this day remains the only) Polish national in space, when he flew aboard the Soviet Soyuz 30 spacecraft in 1978.

Mirosław Hermaszewski was born into a Polish family in Lipniki, formerly in the Wołyń Voivodeship of Poland, but at the time part of Reichskommissariat Ukraine, and since the end of the Second World War in Ukraine. He is a survivor of the Volhynian massacres during which Ukrainian nationalists murdered 19 members of his family, including his father. Hermaszewski narrowly escaped death himself when the Ukrainian Insurgent Army attacked Lipniki on the night of 26–27 March 1943.[1] After the incorporation of former Polish territory into the Ukrainian SSR at the end of the war, what was left of Hermaszewski's family were deported to Wołów near Wrocław, where he completed elementary and high school.

In 1965, he graduated from the military pilot school in Dęblin. In 1978, he was chosen from almost 500 Polish pilots to take part in the Intercosmos space program. Together with Pyotr Klimuk, he spent almost eight days on board the Salyut 6 space station (from 17:27 on 27 June to 16:31 on 5 July 1978). During their time in orbit, they carried out various geoscience experiments and photographed the Earth.

They landed 300 km west of Tselinograd. Hermaszewski was awarded with the Hero of the Soviet Union title for his participation in the mission. He later became President of the Polish Astronautical Society (1983–89).

During the period of martial law in Poland, Hermaszewski was named as a member of the Military Council of National Salvation without his consent or knowledge. He was studying in Moscow at the time and although he was ordered to return to Warsaw when martial law was declared in December 1981, after two weeks he was released to continue his studies.[citation needed] He was subsequently appointed as commander of the Fighter Pilots School in Dęblin. In 1988, he was promoted to general.

Between 1991 and 1992, Hermaszewski served as second-in-command of the Polish Air Force and Air Defence.[2] He is currently retired. 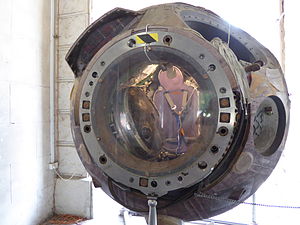 The Soyuz 30 landing capsule in which Mirosław Hermaszewski returned to Earth, on display in the Polish Army Museum in Warsaw 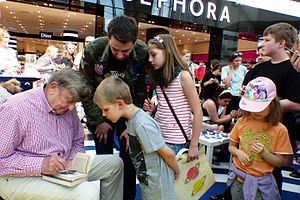