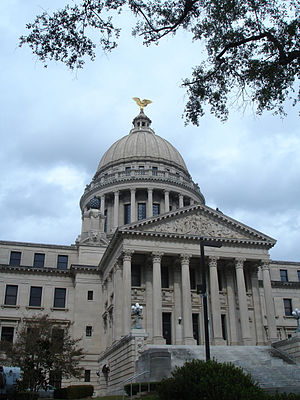 The Mississippi State Capitol in Jackson.

The Legislature convenes at the Mississippi State Capitol in Jackson.

The Mississippi Constitution gives the state legislature the authority to determine rules of its own proceedings, punish its members for disorderly behavior, and expel a member with a two-thirds vote of the membership of his or her chamber.[1] Bills may originate in either house, and be amended or rejected in the other, and must be read by its title on three different days in each house, unless two-thirds of the house dispenses with the rules.[1] The Mississippi Constitution prohibits amending a bill to change its original purpose.[1] Bills amended in the second house, must return for a vote to accept amendments.[1]

The governor has the power to veto legislation, but legislators can override the veto with a two-thirds decision.

Members of the Mississippi House of Representatives are elected to four-year terms and state senators are also elected for four-year. State legislators earn $10,000 per year.[2]