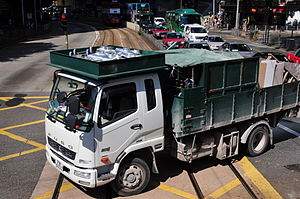 The Mitsubishi Fuso Truck and Bus Corporation (Japanese: 三菱ふそうトラック・バス株式会社, Hepburn: Mitsubishi Fusō Torakku・Basu Kabushiki gaisha?) is a German-owned, Japan-based manufacturer of trucks and buses. It is headquartered in Kawasaki-shi, Kanagawa, Japan. It is one of the world's largest truck manufacturers. Daimler AG of Germany owns approximately 89.29% of Mitsubishi Fuso and Mitsubishi Fuso is a member of the Daimler Trucks division of Daimler AG.[1]

The name Fuso translates to hibiscus, an ancient name for Japan used by the Chinese and this was the name for the company's first product in 1932.

In 1985, MMC and Mitsubishi Corporation established the joint-equity company Mitsubishi Truck of America, Inc. in the United States. In 1993, MMC and Chrysler Corporation dissolved their equity partnership.

In 1999, MMC and AB Volvo entered an equity and operational alliance covering truck and bus operations, and AB Volvo acquired 5% of MMC stock. In 2001, DaimlerChrysler replaced AB Volvo as MMC's strategic alliance partner in the truck and bus sector, and MMC renamed the Tokyo Plant the Truck and Bus Production Office (referred to externally as the Kawasaki Plant).

Fuso trucks are mostly developed and built in Japan. The facilities include:

Fuso FJ rigid truck, made in India, at the International Motor Show 2014 in Hanover, Germany

The Canter has been manufactured by Mitsubishi Fuso in Tramagal, Portugal since 1980. The factory has a production capacity of 15,000 units per year and approximately 480 employees, as of April 2005.

Fuso trucks are manufactured in India at the DICV plant in Oragadam near Chennai. Those vehicles are sold in export markets in East Africa and Southeast Asia.[3]

The European Marketing & Sales Headquarters of Mitsubishi Fuso is located in Stuttgart, Germany. 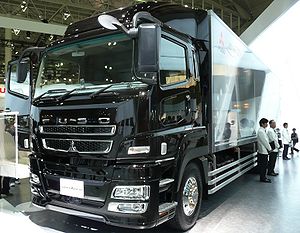 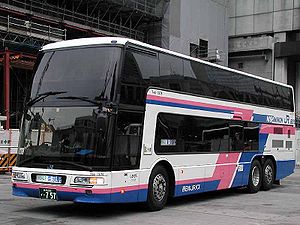 A Fuso Aero King is operated by Nishinihon JR Bus Co., in Japan. 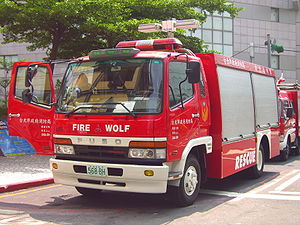 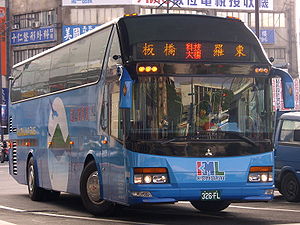 A Fuso RM bus is operated by Kamalan Bus Inc. in Taiwan. 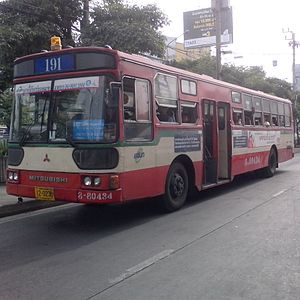 A Fuso RP118 bus is operated by BMTA in Thailand.

The Mitsubishi Fuso Aero Star Eco Hybrid (diesel-electric bus) is now in trials in Japan. According to the company, it can reduce fuel consumption by as much as 30 percent.[6] The Mitsubishi Fuso Aero Star Eco Hybrid operates with a series hybrid drive, in which the diesel engine does not drive wheels directly but instead is used solely to drive an electrical generator to recharge lithium-ion batteries,[7] connected to the two electric motor (with a combined output of 158 kW), which propel the vehicle.[1]

Daimler Trucks uses such a system for most of its full-hybrid commercial vehicles, including in the Mitsubishi Fuso Canter Eco Hybrid, while series hybrids are reserved for urban buses, where they work most efficiently.[7]

Outside of Japan, vehicles manufactured by Mitsubishi Fuso Truck and Bus Corporation are sold in: