Mitteldeutscher Rundfunk (Central German Broadcasting, MDR) is the public broadcaster for the federal states of Thuringia, Saxony and Saxony-Anhalt. Established in January 1991, it has its headquarters in Leipzig and regional studios in Dresden, Erfurt and Magdeburg. MDR is a member of the ARD consortium of public broadcasters in Germany.

MDR broadcasts its own television channel to the three states it serves and also contributes programming to the first German TV channel (Das Erste), as well as broadcasting a number of radio channels. 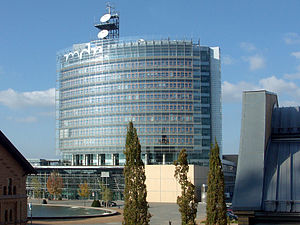 MDR has approximately 2000 employees. The main television studio is in Leipzig, and the main radio studio is in Halle. There are also radio studios in each of the three state capitals for the territory that MDR represents: Dresden (Saxony), Erfurt (Thuringia), and Magdeburg (Saxony-Anhalt).

In 2012 87% of MDR's total annual income of €684,529,979 [1] was derived from the licence fees payable by all households at the rate of €17,50.[2] These fees are not collected directly by MDR but by the Beitragsservice (fee collection service) owned jointly by ARD (and its members), the second television network ZDF, and the national radio broadcaster Deutschlandradio.

MDR produces programming, both independently and in collaboration with other broadcasters, for transmission by a number of television and radio networks.

The MDR operates two musical organizations and a ballet corps.

The MDR also has the lead management of the MDR TV Ballet (German: MDR Fernsehballett), the only TV ballet company in Europe. It was founded in 1962 as the "DFF-Fernsehballett", reorganized in 1992, and has 30 members.

MDR does not own its own transmission towers. Instead, they are leased through and operated by Deutsche Telekom.