Mixed reality (MR), sometimes referred to as hybrid reality,[1] is the merging of real and virtual worlds to produce new environments and visualizations where physical and digital objects co-exist and interact in real time. Mixed reality takes place not only in the physical world or the virtual world,[1] but is a mix of reality and virtual reality, encompassing both augmented reality and augmented virtuality.[2]

An Example Mixed Reality: Virtual characters mixed into a live video stream of the real world.[3]

This continuum is one of the two axes in Steve Mann's concept of mediated reality as implemented by various welding helmets and wearable computers and wearable photographic systems he created in the 1970s and early 1980s,[4][5][6][7][8] the second axis being the mediality continuum, which includes, for example, Diminished Reality (as implemented in a welding helmet or eyeglasses that can block out advertising or replace real-world ads with useful information)[9]

"The conventionally held view of a Virtual Reality (VR) environment is one in which the participant-observer is totally immersed in, and able to interact with, a completely synthetic world. Such a world may mimic the properties of some real-world environments, either existing or fictional; however, it can also exceed the bounds of physical reality by creating a world in which the physical laws ordinarily governing space, time, mechanics, material properties, etc. no longer hold. What may be overlooked in this view, however, is that the VR label is also frequently used in association with a variety of other environments, to which total immersion and complete synthesis do not necessarily pertain, but which fall somewhere along a virtuality continuum. In this paper we focus on a particular subclass of VR related technologies that involve the merging of real and virtual worlds, which we refer to generically as Mixed Reality (MR)." 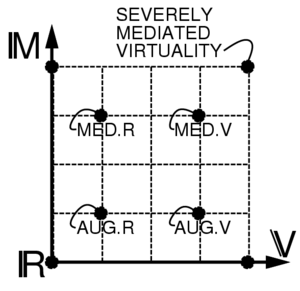 In a physics context, the term "interreality system"[10] refers to a virtual reality system coupled to its real-world counterpart. A paper in the May 2007 issue of Physical Review E[11] describes an interreality system comprising a real physical pendulum coupled to a pendulum that only exists in virtual reality. This system apparently has two stable states of motion: a "Dual Reality" state in which the motion of the two pendula are uncorrelated and a "Mixed Reality" state in which the pendula exhibit stable phase-locked motion which is highly correlated. The use of the terms "mixed reality" and "interreality" in the context of physics is clearly defined but may be slightly different from in other fields.

A topic of much research, MR has found its way into a number of applications, evident in the arts and entertainment industries. However, MR is also branching out into the business and education worlds with systems such as these:

Moving from e-learning to s-learning — state of the art in knowledge transfer for education. Simulation/VR based training, interactive experiential learning. Software and display solutions with scalable licensed curriculum development model.

Combat reality is simulated and represented in complex layered data through HMD.