Websites re-designed for mobile screens, with sizes ranging from smartphones, netbooks, and tablets, to laptops, with a desktop screen shown for scale

The mobile Web refers to the use of browser-based Internet services from handheld mobile devices, such as smartphones or feature phones, through a mobile or other wireless network.

Traditionally, access to the World Wide Web has been via fixed-line services on laptops and desktop computers. However, the Web is becoming more accessible by portable and wireless devices. An early 2010 ITU (International Telecommunication Union) report said that with the current growth rates, web access by people on the go — via laptops and smart mobile devices – is likely to exceed web access from desktop computers within the next five years.[1] In January 2014 the time of mobile access to the internet exceeded desktop use in the USA.[2] The shift to mobile Web access has been accelerating with the rise since 2007 of larger multitouch smartphones, and of multitouch tablet computers since 2010. Both platforms provide better Internet access, screens, and mobile browsers- or application-based user Web experiences than previous generations of mobile devices have done. Web designers may work separately on such pages, or pages may be automatically converted as in Mobile Wikipedia.

The distinction between mobile Web applications and native applications is anticipated to become increasingly blurred, as mobile browsers gain direct access to the hardware of mobile devices (including accelerometers and GPS chips), and the speed and abilities of browser-based applications improve. Persistent storage and access to sophisticated user interface graphics functions may further reduce the need for the development of platform-specific native applications.

The Mobile Web has also been called Web 3.0, drawing parallels to the changes users were experiencing as Web 2.0 websites proliferated.[3][4][5]

In an article in Communications of the ACM in April 2013, Web technologist Nicholas C. Zakas, noted that mobile phones in use in 2013 were more powerful than Apollo 11's 70 lb (32 kg) Apollo Guidance Computer used in the July 1969 lunar landing.[7][8][9] However, in spite of their power, in 2013, mobile devices still suffer from Web performance with slow connections similar to the 1996 stage of Web development.[8][9] Mobile devices with slower download request/response times, the latency of over-the-air data transmission,[8][9] with "high-latency connections, slower CPUs, and less memory" force developers to rethink Web applications created for desktops with "wired connections, fast CPUs, and almost endless memory."[8][9] 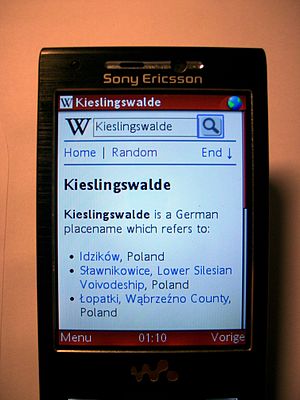 'Mobile Internet' refers to access to the Internet via a cellular telephone service provider. It is wireless access that can handoff to another radio tower while it is moving across the service area. It can refer an immobile device that stays connected to one tower, but this is not the meaning of "mobile" here. Wi-Fi and other better methods are commonly available for users not on the move. Cellular base stations are more expensive to provide than a wireless base station that connects directly to an internet service provider, rather than through the telephone system.

A mobile broadband modem "tethers" the smartphone to one or more computers or other end user devices to provide access to the Internet via the protocols that cellular telephone service providers may offer.

According to BuzzCity, mobile internet increased 30% from Q1 to Q2 2011. The four countries which have advertising impression (?) in total more than 1 billion in one quarter were India, Indonesia, Vietnam and United States.[10] As of July 2012, approximately 10.5% of all Web traffic occurs through mobile devices (up from 4% in December 2010).[11] 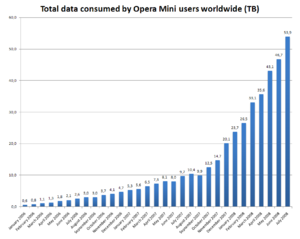 The Mobile Web Initiative (MWI) was set up by the W3C to develop the best practices and technologies relevant to the mobile Web. The goal of the initiative is to make browsing the Web from mobile devices more reliable and accessible. The main aim is to evolve standards of data formats from Internet providers that are tailored to the specifications of particular mobile devices. The W3C has published guidelines for mobile content, and is addressing the problem of device diversity by establishing a technology to support a repository of device descriptions.

W3C is also developing a validating scheme to assess the readiness of content for the mobile web, through its mobileOK Scheme, which will help content developers to quickly determine if their content is web-ready. The W3C guidelines and mobile OK approach have not been immune from criticism.[citation needed] This puts the emphasis on Adaptation, which is now seen as the key process in achieving the ubiquitous web, when combined with a device description repository.

mTLD, the registry for .mobi, has released a free testing tool called the MobiReady Report (see mobiForge) to analyze the mobile readiness of website. It does a free page analysis and gives a Mobi Ready score. This report tests the mobile-readiness of the site using industry best practices and standards.

Other standards for the mobile web are being documented and explored for particular applications by interested industry groups, such as the use of the mobile web for the purpose of education and training.

The first access to the mobile web was commercially offered in Finland in 1996 on the Nokia 9000 Communicator phone via the Sonera and Radiolinja networks. This was access to the real internet. The first commercial launch of a mobile-specific browser-based web service was in 1999 in Japan when i-mode was launched by NTT DoCoMo. 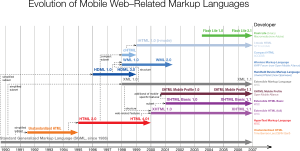 The mobile Web primarily utilises lightweight pages like this one written in Extensible Hypertext Markup Language (XHTML) or Wireless Markup Language (WML) to deliver content to mobile devices. Many new mobile browsers are moving beyond these limits by supporting a wider range of Web formats, including variants of HTML commonly found on the desktop Web.

The .mobi sponsored top-level domain was launched specifically for the mobile Internet by a consortium of companies including Google, Microsoft, Nokia, Samsung, and Vodafone. By forcing sites to comply with mobile web standards, .mobi tries to ensure visitors a consistent and optimized experience on their mobile device. However, this domain has been criticized by several big names, including Tim Berners-Lee of the W3C, who claims that it breaks the device independence of the web:

It is fundamentally useful to be able to quote the URI for some information and then look up that URI in an entirely different context. For example, I may want to look up a restaurant on my laptop, bookmark it, and then, when I only have my phone, check the bookmark to have a look at the evening menu. Or, my travel agent may send me a pointer to my itinerary for a business trip. I may view the itinerary from my office on a large screen and want to see the map, or I may view it at the airport from my phone when all I want is the gate number.

I urge ICANN not to create the ".mobi" top level domain.

Though Internet access "on the go" provides advantages to many, such as the ability to communicate by email with others and obtain information anywhere, the web, accessed from mobile devices, has many limits, which may vary, depending on the device. However, newer smartphones overcome some of these restrictions. Some problems which may be encountered include:

The inability of mobile web applications to access the local capabilities on the mobile device can limit their ability to provide the same features as native applications. The OMTP BONDI activity is acting as a catalyst to enable a set of JavaScript APIs which can access local capabilities in a secure way on the mobile device. Specifications and a reference implementation[13] have been produced. Security is a key aspect in this provision in order to protect users from malicious web applications and widgets.

In addition to the limits of the device, there are limits that should be made known to users concerning the interference these devices cause in other electromagnetic technology.

The convergence of the Internet and phone, in particular has caused hospitals to increase their mobile phone exclusion zones. A study by Erik van Lieshout and colleagues (Academic Medical Centre, University of Amsterdam) has found that the General Packet Radio Service (GPRS) used in modern phones can affect machines from up to 3 meters away. The Universal Mobile Telecommunications System (UMTS) signals, used in 3G networks, have a smaller exclusion zone of just a few centimeters. The worst offenders in hospitals are the doctors.[14]