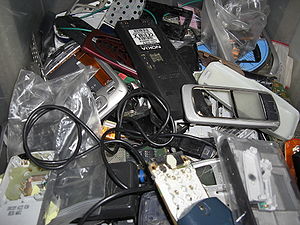 Mobile phones are able to be recycled at the end of their life.

Rapid technology change, low initial cost, and even planned obsolescence have resulted in a fast-growing surplus, which contributes to the increasing amount of electronic waste around the globe. Recyclers consider electronic waste a "rapidly expanding" issue.[1] In the United States, an estimated 70% of heavy metals in landfills comes from discarded electronics,[2] while electronic waste represents only 2% of America's trash in landfills.[3]

Mobile phones are "considered hazardous waste" in California; many chemicals in such phones leach from landfills into the groundwater system.[4] Environmental advocacy group Greenpeace claims that the soldering of the iPhone battery into its handset hinders its being recycled. It also states that its scientists found toxic phthalates on iPhone cables, and it holds that this contravenes California's Proposition 65, which requires warning labels on products exposing consumers to phthalates.[5]

Because the U.S has not ratified the Basel Convention or its Ban Amendment, and has no domestic laws forbidding the export of toxic waste, the Basel Action Network estimates that about 80% of the electronic waste directed to recycling in the U.S. does not get recycled there at all, but is put on container ships and sent to countries such as China.[6][7][8][9] Guiyu in the Shantou region of China, and Delhi and Bangalore in India, have electronic waste processing areas.[6][10][11]

Americans toss millions of cell phones each year in favor of newer technology—and all those discarded phones may be taking a toll on the environment. Electronic scrap accounts for 70% of the overall toxic waste currently found in landfills.[12] According to the U.S. Environmental Protection Agency (EPA), 141 million mobile phones were discarded in 2009 and only 12 million of those were collected for recycling.[13]

A cell phone’s shelf life is only about 24 months for the average consumer.[14] This means that newer cell phone models are constantly put up on the market to replace older ones. This is as a result of the rapid progression of technology in the mobile industry. According to Matt Ployhar of Intel, the industry is rapidly evolving, possibly even at “Moore's law pace or faster.”[15] This means that newer cell phone models are continually on the rise of consumerism and more outdated models are likely to end up in landfills.

Most cell phones contain precious metals and plastics that can be recycled to save energy and resources that would otherwise be required to mine or manufacture. When placed in a landfill, these materials can pollute the air and contaminate soil and drinking water.[16] Cell phone coatings are typically made of lead, which is a toxic chemical that can result in adverse health effects when exposed to it in high levels. The circuit board on cell phones can be made of copper, gold, lead, zinc, beryllium, tantalum, coltan, and other raw materials that would require significant resources to mine and manufacture.[17] This is why it is important to recycle old cell phones and source these increasingly scarce materials whenever possible.

Electronic waste (e-waste) is a global problem; especially since many developed countries, including the U.S., ship their discarded electronic devices to less developed parts of the world. Oftentimes, the e-waste is improperly dismantled and burned, producing toxic emissions harmful to waste site workers, children, and nearby communities. Therefore, it is important for cell phone users to dispose of and recycle their devices responsibly and ethically.

Mobile phones currently pose a huge problem for numerous countries around the world. Manufacturers and agencies are slowly adapting new programs in an effort to curtail the amount of waste that has been rising over the years.

Australia currently has a national recycling program that was established under the name of MobileMuster.[18] This program originated in 1998 after a successful recycling trial in one of their states. Currently, its main focus is centered around mobile phones, batteries and any related accessories. They collaborate with over 1,400 retailers, local councils, government agencies and businesses in their recycling efforts. In 2005 MobileMuster launched a campaign that gathered statistical data showing 46% of the Australian population was aware of the option to recycle their mobile devices and its accessories. The greatest benefit that arose from this research was the simple fact that raising public awareness of a recycling program actually lead to a large spike in the amount of devices being recycled. In March 2006, awareness had increased to 54%. By the end of June more than 590,000 devices and 1.5 million batteries had been collected by MobileMuster. This amounts to roughly 367 tons of material, which is the equivalent to a 16% increase in the amount of devices over the span of a year.[19] Today, they are placing a heavy emphasis on not only recycling phones but rather reusing them. The reasoning behind this is that reusing leads a decreased amount of resources being extracted from the environment, therefore minimizing the impact.[20]

Revenues for the US mobile phone recycling industry will see a notable increase until at least 2019.[21] An upturn in mobile phone ownership and new technologies have created a thriving replacement market and thus a larger base of phones available for recycling.[21] Approximately 150 million mobile phones are discarded each year in the USA.[21] Up to 35 000 pounds of copper and 772 pounds of silver can be recovered per 1 million devices recycled.[21] A 'marginal' amount of gold and palladium has also been extracted.[21]

A report released in early 2014 found that when it comes to mobile phone recycling programs, cash is the single biggest incentive for consumers in recycling phones.[22] As more people became aware of the monetary value of their old cell phones and other small electronics such as tablets, comparison websites showing users the latest buying prices grew in popularity. The first cell phone buying comparison website to launch in North America was SellMyCellPhones.com which launched in 2010.

In 1991 ReCellular was founded during a time when there were only 16 million mobile subscribers worldwide. From here, their business has grown from processing roughly 400 used phones to around 300,000 a month. Since its initial start date, more than 15 million phones have been collected. Lately, ReCellular has been working closely with the Latin American Trade Association (AHCIET) in an effort to expand the recycling efforts to customers scattered throughout South America, Central America, and Caribbean. 60% of these gathered phones are suitable for reuse; those that aren’t are stripped for parts at facilities and recycled.[23]

Founded in 1992, EMC Europe is a British company that works with other companies to meet all of their technology recycling needs. It is the market leader for mobile phone and computer recycling for corporations in Europe with over 100,000 clients in 15 countries. EMC Europe was awarded Best Employer 2013 and Best Innovation 2014 by Best Business Awards.[24] The company offers free shipping, erases all private data, values the product, and sets up quick electronic payment. EMC complies with the Waste Electrical and Electronic Equipment Directive.[25]

Mobile phones have value well after their intended use. Yet the value of these phones to recyclers is marginal and relies on high volume to become profitable. The economic value of recycled cell phones is split into two categories; refurbished units that are resold to end users and phones that have no value to retail consumers that are recycled for their precious metals.

The University of California Santa Barbara published a study in 2010 on the subject called, "Economics of Cell Phone Reuse and Recycling" that states the value of reused and recycled cell phones. In 2006, according to the study the average cost for U.S. cell phone refurbishers ReCellular, PaceButler and RMS was $2.10 while the average revenue from said phones was $17.[26] Of the two recycling methods, refurbishment of cell phones is significantly more profitable than recycling the internal parts.

The study also describes the value of all precious metals inside of cell phones as well as the cost of extracting said metals. The average cost in 2006 to extract the precious metals for the U.S. cell phone recycling company ECS Refining was $.18 while the average revenue from the recycled metals was $.75.[27] With a profit margin significantly smaller than refurbished units, this method of gaining economic value from the recycling of cell phones is significantly more volume dependent. The most valuable precious metal in cell phones is Gold which is used in the unit’s microprocessor. This precious metals percentage of the total mass of phones has constantly decreased over time. From 1992 to 2006, gold as a percentage of total mass of cell phones dropped from .06% to .03%.[28] There is a significant amount of volume in the U.S. market with Americans in 2009 throwing away on average 350,000 cell phones a day but with thinning margins, volume starts to become irrelevant.[29]

Therefore, the economic incentive for recycling the precious metals in cell phones is decreasing in the United States as manufacturers look for more cost effective ways to produce cell phones. Refurbishing and reselling cell phones continues to be the most economically viable option for recycling this form of e-waste.

EcoATM, founded in 2008 by serial entrepreneurs Mark Bowles, Seth Heine and Michael Librizzi,[30] is the first phone-recycling kiosk. They maintain a database of more than 4,000 mint-condition handsets. After connecting with an appropriate cable, the machine will scrutinize the condition of the phones, offer to erase the data and dispense cash based on the resale value. As of 2010[update] 10 ecoATMs had already recycled 33,000 phones with average payout $9 per phone, and 500 more kiosks were planned.[31] As of May 2013[update] there are 350 ecoATMs in 24 states, with two more installed per day and plans for international expansion. The company resells 75 percent of the devices to refurbishers; the rest go to e-waste recyclers who are certified by R2 Solutions or e-Stewards industry standards. EcoATM is San Diego-based[30] and since July 2013 owned by Outerwall, Inc..[32]