A conceptual model is a model made of the composition of concepts, which are used to help people know, understand, or simulate a subject the model represents. Some models are physical objects; for example, a toy model which may be assembled, and may be made to work like the object it represents.

The term conceptual model may be used to refer to models which are formed after a conceptualization or generalization[1] process. Conceptual models are often abstractions of things in the real world whether physical or social. Semantics studies are relevant to various stages of concept formation and use as Semantics is basically about concepts, the meaning that thinking beings give to various elements of their experience.

Models of concepts and models that are conceptual

The term conceptual model is normal. It could mean "a model of concept" or it could mean "a model that is conceptual." A distinction can be made between what models are and what models are models of. With the exception of iconic models, such as a scale model of Winchester Cathedral, most models are concepts. But they are, mostly, intended to be models of real world states of affairs. The value of a model is usually directly proportional to how well it corresponds to a past, present, future, actual or potential state of affairs. A model of a concept is quite different because in order to be a good model it need not have this real world correspondence.[2] In artificial intelligence conceptual models and conceptual graphs are used for building expert systems and knowledge-based systems, here the analysts are concerned to represent expert opinion on what is true not their own ideas on what is true.

Type and scope of conceptual models

Conceptual models (models that are conceptual) range in type from the more concrete, such as the mental image of a familiar physical object, to the formal generality and abstractness of mathematical models which do not appear to the mind as an image. Conceptual models also range in terms of the scope of the subject matter that they are taken to represent. A model may, for instance, represent a single thing (e.g. the Statue of Liberty), whole classes of things (e.g. the electron), and even very vast domains of subject matter such as the physical universe. The variety and scope of conceptual models is due to the variety of purposes had by the people using them.

Conceptual modeling is the activity of formally describing some aspects of the physical and social world around us for the purposes of understanding and communication."[3] 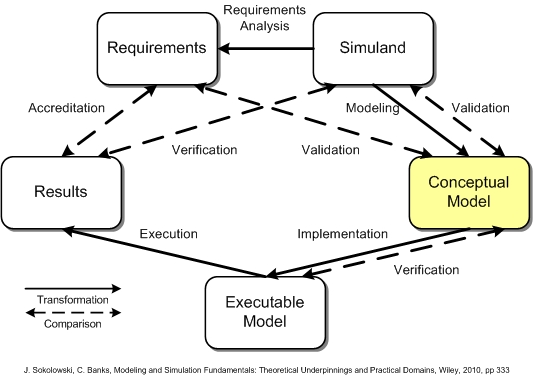 Data flow modeling (DFM) is a basic conceptual modeling technique that graphically represents elements of a system. DFM is a fairly simple technique, however, like many conceptual modeling techniques, it is possible to construct higher and lower level representative diagrams. The data flow diagram usually does not convey complex system details such as parallel development considerations or timing information, but rather works to bring the major system functions into context. Data flow modeling is a central technique used in systems development that utilizes the Structured Systems Analysis and Design Method (SSADM).

Entity-relationship modeling (ERM) is a conceptual modeling technique used primarily for software system representation. Entity-relationship diagrams, which are a product of executing the ERM technique, are normally used to represent database models and information systems. The main components of the diagram are the entities and relationships. The entities can represent independent functions, objects, or events. The relationships are responsible for relating the entities to one another. To form a system process, the relationships are combined with the entities and any attributes needed to further describe the process. Multiple diagramming conventions exist for this technique; IDEF1X, Bachman, and EXPRESS, to name a few. These conventions are just different ways of viewing and organizing the data to represent different system aspects.

The event-driven process chain (EPC) is a conceptual modeling technique which is mainly used to systematically improve business process flows. Like most conceptual modeling techniques, the event driven process chain consists of entities/elements and functions that allow relationships to be developed and processed. More specifically, the EPC is made up of events which define what state a process is in or the rules by which it operates. In order to progress through events, a function/ active event must be executed. Depending on the process flow, the function has the ability to transform event states or link to other event driven process chains. Other elements exist within an EPC, all of which work together to define how and by what rules the system operates. The EPC technique can be applied to business practices such as resource planning, process improvement, and logistics.

The Dynamic Systems Development Method (DSDM) uses a specific process called Joint Application Design (JAD) to conceptually model a systems life cycle. JAD is intended to focus more on the higher level development planning that precedes a projects initialization. The JAD process calls for a series of workshops in which the participants work to identify, define, and generally map a successful project from conception to completion. This method has been found to not work well for large scale applications, however smaller applications usually report some net gain in efficiency.[7]

Also known as Petri Nets, this conceptual modeling technique allows a system to be constructed with elements that can be described by direct mathematical means. The petri net, because of its nondeterministic execution properties and well defined mathematical theory, is a useful technique for modeling concurrent system behavior, i.e. simultaneous process executions.

Gemino and Wand go on to expand the affected variable content of their proposed framework by considering the focus of observation and the criterion for comparison.[8] The focus of observation considers whether the conceptual modeling technique will create a "new product", or whether the technique will only bring about a more intimate understanding of the system being modeled. The criterion for comparison would weigh the ability of the conceptual modeling technique to be efficient or effective. A conceptual modeling technique that allows for development of a system model which takes all system variables into account at a high level may make the process of understanding the system functionality more efficient, but the technique lacks the necessary information to explain the internal processes, rendering the model less effective.

Another function of the simulation conceptual model is to provide a rational and factual basis for assessment of simulation application appropriateness.

Models in philosophy and science

In cognitive psychology and philosophy of mind, a mental model is a representation of something in the mind,[10] but a mental model may also refer to a nonphysical external model of the mind itself.[11]

A metaphysical model is a type of conceptual model which is distinguished from other conceptual models by its proposed scope. A metaphysical model intends to represent reality in the broadest possible way. This is to say that it explains the answers to fundamental questions such as whether matter and mind are one or two substances; or whether or not humans have free will.

An epistemological model is a type of conceptual model whose proposed scope is the known and the knowable, and the believed and the believable.

Model theory is the study of (classes of) mathematical structures such as groups, fields, graphs, or even universes of set theory, using tools from mathematical logic. A structure that gives meaning to the sentences of a formal language is called a model for the language. If a model for a language moreover satisfies a particular sentence or theory (set of sentences), it is called a model of the sentence or theory. Model theory has close ties to algebra and universal algebra.

Mathematical models can take many forms, including but not limited to dynamical systems, statistical models, differential equations, or game theoretic models. These and other types of models can overlap, with a given model involving a variety of abstract structures.

A more comprehensive type of mathematical model[12] uses a linguistic version of category theory to model a given situation. Akin to entity-relationship models, custom categories or sketches can be directly translated into database schemas. The difference is that logic is replaced by category theory, which brings powerful theorems to bear on the subject of modeling, especially useful for translating between disparate models (as functors between categories).

A scientific model is a simplified abstract view of a complex reality. A scientific model represents empirical objects, phenomena, and physical processes in a logical way. Attempts to formalize the principles of the empirical sciences use an interpretation to model reality, in the same way logicians axiomatize the principles of logic. The aim of these attempts is to construct a formal system for which reality is the only interpretation. The world is an interpretation (or model) of these sciences, only insofar as these sciences are true.[13]

In economics, a model is a theoretical construct that represents economic processes by a set of variables and a set of logical and/or quantitative relationships between them. The economic model is a simplified framework designed to illustrate complex processes, often but not always using mathematical techniques. Frequently, economic models use structural parameters. Structural parameters are underlying parameters in a model or class of models. A model may have various parameters and those parameters may change to create various properties.

The same process model is used repeatedly for the development of many applications and thus, has many instantiations.

Conceptual models of human activity systems are used in Soft systems methodology (SSM) which is a method of systems analysis concerned with the structuring of problems in management. These models are models of concepts; the authors specifically state that they are not intended to represent a state of affairs in the physical world. They are also used in Information Requirements Analysis (IRA) which is a variant of SSM developed for information system design and software engineering.

Entity-relationship models have had wide application in the building of information systems intended to support activities involving objects and events in the real world. In these cases they are models that are conceptual. However, this modeling method can be used to build computer games or a family tree of the Greek Gods, in these cases it would be used to model concepts.

Like entity-relationship models, domain models can be used to model concepts or to model real world objects and events.