From Infogalactic: the planetary knowledge core
Jump to: navigation, search
For other uses, see Modern art (disambiguation). Not to be confused with art moderne.

Modern art includes artistic work produced during the period extending roughly from the 1860s to the 1970s, and denotes the style and philosophy of the art produced during that era.[1] The term is usually associated with art in which the traditions of the past have been thrown aside in a spirit of experimentation.[2] Modern artists experimented with new ways of seeing and with fresh ideas about the nature of materials and functions of art. A tendency away from the narrative, which was characteristic for the traditional arts, toward abstraction is characteristic of much modern art. More recent artistic production is often called Contemporary art or Postmodern art.

Modern art begins with the heritage of painters like Vincent van Gogh, Paul Cézanne, Paul Gauguin, Georges Seurat and Henri de Toulouse-Lautrec all of whom were essential for the development of modern art. At the beginning of the 20th century Henri Matisse and several other young artists including the pre-cubists Georges Braque, André Derain, Raoul Dufy, Jean Metzinger and Maurice de Vlaminck revolutionized the Paris art world with "wild", multi-colored, expressive landscapes and figure paintings that the critics called Fauvism. Henri Matisse's two versions of The Dance signified a key point in his career and in the development of modern painting.[3] It reflected Matisse's incipient fascination with primitive art: the intense warm color of the figures against the cool blue-green background and the rhythmical succession of the dancing nudes convey the feelings of emotional liberation and hedonism.

Initially influenced by Toulouse-Lautrec, Gauguin and other late 19th century innovators, Pablo Picasso made his first cubist paintings based on Cézanne's idea that all depiction of nature can be reduced to three solids: cube, sphere and cone. With the painting Les Demoiselles d'Avignon (1907), Picasso dramatically created a new and radical picture depicting a raw and primitive brothel scene with five prostitutes, violently painted women, reminiscent of African tribal masks and his own new Cubist inventions. Analytic cubism was jointly developed by Pablo Picasso and Georges Braque, exemplified by Violin and Candlestick, Paris, from about 1908 through 1912. Analytic cubism, the first clear manifestation of cubism, was followed by Synthetic cubism, practiced by Braque, Picasso, Fernand Léger, Juan Gris, Albert Gleizes, Marcel Duchamp and several other artists into the 1920s. Synthetic cubism is characterized by the introduction of different textures, surfaces, collage elements, papier collé and a large variety of merged subject matter.[citation needed]

The notion of modern art is closely related to Modernism.[4] 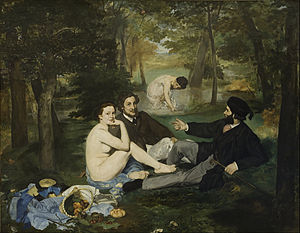 Roots in the 19th century

Although modern sculpture and architecture are reckoned to have emerged at the end of the 19th century, the beginnings of modern painting can be located earlier.[5] The date perhaps most commonly identified as marking the birth of modern art is 1863,[6] the year that Édouard Manet showed his painting Le déjeuner sur l'herbe in the Salon des Refusés in Paris. Earlier dates have also been proposed, among them 1855 (the year Gustave Courbet exhibited The Artist's Studio) and 1784 (the year Jacques-Louis David completed his painting The Oath of the Horatii).[6] In the words of art historian H. Harvard Arnason: "Each of these dates has significance for the development of modern art, but none categorically marks a completely new beginning .... A gradual metamorphosis took place in the course of a hundred years."[6]

The strands of thought that eventually led to modern art can be traced back to the Enlightenment, and even to the 17th century.[7] The important modern art critic Clement Greenberg, for instance, called Immanuel Kant "the first real Modernist" but also drew a distinction: "The Enlightenment criticized from the outside ... . Modernism criticizes from the inside."[8] The French Revolution of 1789 uprooted assumptions and institutions that had for centuries been accepted with little question and accustomed the public to vigorous political and social debate. This gave rise to what art historian Ernst Gombrich called a "self-consciousness that made people select the style of their building as one selects the pattern of a wallpaper."[9]

The pioneers of modern art were Romantics, Realists and Impressionists.[10] By the late 19th century, additional movements which were to be influential in modern art had begun to emerge: post-Impressionism as well as Symbolism.

Influences upon these movements were varied: from exposure to Eastern decorative arts, particularly Japanese printmaking, to the coloristic innovations of Turner and Delacroix, to a search for more realism in the depiction of common life, as found in the work of painters such as Jean-François Millet. The advocates of realism stood against the idealism of the tradition-bound academic art that enjoyed public and official favor.[11] The most successful painters of the day worked either through commissions or through large public exhibitions of their own work. There were official, government-sponsored painters' unions, while governments regularly held public exhibitions of new fine and decorative arts.

The Impressionists argued that people do not see objects but only the light which they reflect, and therefore painters should paint in natural light (en plein air) rather than in studios and should capture the effects of light in their work.[12] Impressionist artists formed a group, Société Anonyme Coopérative des Artistes Peintres, Sculpteurs, Graveurs ("Association of Painters, Sculptors, and Engravers") which, despite internal tensions, mounted a series of independent exhibitions.[13] The style was adopted by artists in different nations, in preference to a "national" style. These factors established the view that it was a "movement". These traits—establishment of a working method integral to the art, establishment of a movement or visible active core of support, and international adoption—would be repeated by artistic movements in the Modern period in art. 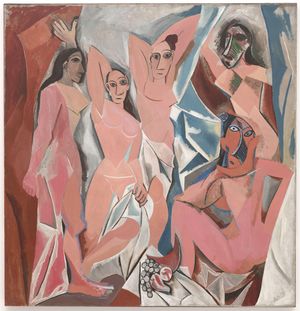 Among the movements which flowered in the first decade of the 20th century were Fauvism, Cubism, Expressionism, and Futurism.

During the years between 1910 and the end of World War I and after the heyday of cubism, several movements emerged in Paris. Giorgio de Chirico moved to Paris in July 1911, where he joined his brother Andrea (the poet and painter known as Alberto Savinio). Through his brother he met Pierre Laprade, a member of the jury at the Salon d'Automne where he exhibited three of his dreamlike works: Enigma of the Oracle, Enigma of an Afternoon and Self-Portrait. During 1913 he exhibited his work at the Salon des Indépendants and Salon d’Automne, and his work was noticed by Pablo Picasso, Guillaume Apollinaire, and several others. His compelling and mysterious paintings are considered instrumental to the early beginnings of Surrealism. Song of Love (1914) is one of the most famous works by de Chirico and is an early example of the surrealist style, though it was painted ten years before the movement was "founded" by André Breton in 1924.

World War I brought an end to this phase but indicated the beginning of a number of anti-art movements, such as Dada, including the work of Marcel Duchamp, and of Surrealism. Artist groups like de Stijl and Bauhaus developed new ideas about the interrelation of the arts, architecture, design, and art education.

Modern art was introduced to the United States with the Armory Show in 1913 and through European artists who moved to the U.S. during World War I.

It was only after World War II, however, that the U.S. became the focal point of new artistic movements.[14] The 1950s and 1960s saw the emergence of Abstract Expressionism, Color field painting, Pop art, Op art, Hard-edge painting, Minimal art, Lyrical Abstraction, Fluxus, Happening, Video art, Postminimalism, Photorealism and various other movements. In the late 1960s and the 1970s, Land art, Performance art, Conceptual art, and other new art forms had attracted the attention of curators and critics, at the expense of more traditional media.[15] Larger installations and performances became widespread.

By the end of the 1970s, when cultural critics began speaking of "the end of painting" (the title of a provocative essay written in 1981 by Douglas Crimp), new media art had become a category in itself, with a growing number of artists experimenting with technological means such as video art.[16] Painting assumed renewed importance in the 1980s and 1990s, as evidenced by the rise of neo-expressionism and the revival of figurative painting.[17]

Towards the end of the 20th century, a number of artists and architects started questioning the idea of "the modern" and created typically Postmodern works.[18]

For a comprehensive list, see Museums of modern art.