Modern physics is an effort to understand the underlying processes of the interactions of matter utilizing the tools of science & engineering. It implies that nineteenth century descriptions of phenomena are not sufficient to describe nature as observed with modern instruments. It is generally assumed that a consistent description of these observations will incorporate elements of quantum mechanics & relativity.

In a literal sense, the term modern physics, means up-to-date physics. In this sense, a significant portion of so-called classical physics is modern. However, since roughly 1890, new discoveries have caused significant paradigm shifts: the advent of quantum mechanics (QM), and of Einsteinian relativity (ER). Physics that incorporates elements of either QM or ER (or both) is said to be modern physics. It is in this latter sense that the term is generally used.

Modern physics is often encountered when dealing with extreme conditions. Quantum mechanical effects tend to appear when dealing with "lows" (low temperatures, small distances), while relativistic effects tend to appear when dealing with "highs" (high velocities, large distances), the "middles" being classical behaviour. For example, when analysing the behaviour of a gas at room temperature, most phenomena will involve the (classical) Maxwell–Boltzmann distribution. However near absolute zero, the Maxwell–Boltzmann distribution fails to account for the observed behaviour of the gas, and the (modern) Fermi–Dirac or Bose–Einstein distributions have to be used instead. 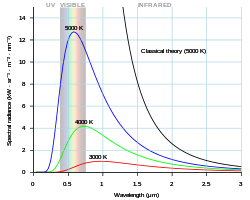 Main articles: History of quantum mechanics and History of relativity

These are generally considered to be the topics regarded as the "core" of the foundation of modern physics: