Modern warfare is warfare using the concepts, methods, and military technology that have come into use during and after World War II and the Korean War.[citation needed] The concepts and methods have assumed more complex forms of the 19th- and early-20th-century antecedents, largely due to the widespread use of highly advanced information technology, and combatants must modernize constantly to preserve their battle worthiness.[1] Although total war was thought to be the form of international conflicts from the experience of the French Revolutionary Wars to World War II, the term no longer describes warfare in which a belligerent use all of its resources to destroy the enemy's organized ability to engage in war. The practice of total war which had been in use for over a century, as a form of war policy, has been changed dramatically with greater awareness of tactical, operational, and strategic battle information.

War in modern times has been the inclusion of civilians and civilian infrastructure as targets in destroying the enemy's ability to engage in war.[disputed – discuss] The targeting of civilians developed from two distinct theories.[citation needed] The first theory was that if enough civilians were killed, factories could not function. The second theory was that if civilians were killed, the enemy would be so demoralized that it would have no ability to wage further war.[citation needed] However, UNICEF reports that civilian fatalities are down from 20 percent prior to 1900 AD to less than 5 percent of fatalities in the wars beginning in the 1990s.

With the invention of nuclear weapons, the concept of full-scale war carries the prospect of global annihilation, and as such conflicts since WWII have by definition been "low intensity" conflicts,[2] typically in the form of proxy wars fought within local regional confines, using what are now referred to as "conventional weapons," typically combined with the use of asymmetric warfare tactics and applied use of intelligence.

More recently, the US Department of Defense introduced a concept of battlespace as the integrated information management of all significant factors that impact on combat operations by armed forces for the military theatre of operations, including information, air, land, sea, and space. It includes the environment, factors, and conditions that must be understood to successfully apply combat power, protect the force, or complete the mission. This includes enemy and friendly forces; facilities, weather and terrain within the operational areas and areas of interest.[3]

Some argue that the changing forms of three-dimensional warfare represents nothing more than an evolution of earlier technology.[4]

Aerial warfare is the use of military aircraft and other flying machines in warfare. Aerial warfare includes bombers attacking enemy concentrations or strategic targets; fighter aircraft battling for control of airspace; attack aircraft engaging in close air support against ground targets; naval aviation flying against sea and nearby land targets; gliders, helicopters and other aircraft to carry airborne forces such as paratroopers; aerial refueling tankers to extend operation time or range; and military transport aircraft to move cargo and personnel.

A military situation in which two belligerents of unequal strength interact and take advantage of their respective strengths and weaknesses. This interaction often involves strategies and tactics outside the bounds of conventional warfare, often referred to as terrorism.

Biological warfare, also known as germ warfare, is the use of any organism (bacteria, virus or other disease-causing organism) or toxin found in nature, as a weapon of war. It is meant to incapacitate or kill enemy combatants. It may also be defined as the employment of biological agents to produce casualties in man or animals and damage to plants or material; or defense against such employment.

Electronic warfare refers to mainly non-violent practices used chiefly to support other areas of warfare. The term was originally coined to encompass the interception and decoding of enemy radio communications, and the communications technologies and cryptography methods used to counter such interception, as well as jamming, radio stealth, and other related areas. Over the later years of the 20th century and early years of the 21st century, this has expanded to cover a wide range of areas: the use of, detection of and avoidance of detection by radar and sonar systems, computer hacking, etc.

Fourth generation warfare (4GW) is a concept defined by William S. Lind and expanded by Thomas X. Hammes, used to describe the decentralized nature of modern warfare. The simplest definition includes any war in which one of the major participants is not a state but rather a violent ideological network. Fourth Generation wars are characterized by a blurring of the lines between war and politics, combatants and civilians, conflicts and peace, battlefields and safety.

While this term is similar to terrorism and asymmetric warfare, it is much narrower. Classical insurgencies and the Indian Wars are examples of pre-modern wars, not 4GW. Fourth generation warfare usually has the insurgency group or non-state side trying to implement their own government or reestablish an old government over the one currently running the territory. The blurring of lines between state and non-state is further complicated in a democracy by the power of the media.

Infantry in modern times would consist of Mechanized infantry and Airborne forces. Usually having a type of rifle or sub-machine gun, an infantryman is the basic unit of an army.

Armored warfare in modern times involves a variety of Armored fighting vehicles for the purpose of battle and support. Tanks or other armored vehicles (such as armored personnel carriers or tank destroyers) are slower, yet stronger hunks of metal. They are invulnerable to enemy machine gun fire but prone to rocket infantry, mines, and aircraft so are usually accompanied by infantry. In urban areas, because of smaller space, an armored vehicle is exposed to hidden enemy infantry but as the so-called "Thunder Run" at Baghdad in 2003 showed, armored vehicles can play a critical role in urban combat. In rural areas, an armored vehicle does not have to worry about hidden units though muddy and damp terrain have always been a factor of weakness for Armored tanks and vehicles.

Artillery in contemporary times, is distinguished by its large calibre, firing an explosive shell or rocket, and being of such a size and weight as to require a specialized mount for firing and transport. Weapons covered by this term include "tube" artillery such as the howitzer, cannon, mortar, field gun, and rocket artillery. The term "artillery" has traditionally not been used for projectiles with internal guidance systems, even though some artillery units employ surface-to-surface missiles. Recent advances in terminal guidance systems for small munitions has allowed large calibre shells to be fitted with precision guidance fuses, blurring this distinction.

Guerrilla warfare is defined as fighting by groups of irregular troops (guerrillas) within areas occupied by the enemy. When guerrillas obey the laws and customs of war, they are entitled, if captured, to be treated as ordinary prisoners of war; however, they are often treated by their captors as unlawful combatants and executed. The tactics of guerrilla warfare stress deception and ambush, as opposed to mass confrontation, and succeed best in an irregular, rugged, terrain and with a sympathetic populace, whom guerrillas often seek to win over or dominate by propaganda, reform, and terrorism. Guerrilla warfare has played a significant role in modern history, especially when waged by Communist liberation movements in Southeast Asia (most notably in the Vietnam War) and elsewhere.

Guerrilla fighters gravitate toward weapons which are easily accessible, low in technology, and low in cost. A typical arsenal of the modern guerrilla would include the AK-47, RPGs and Improvised explosive devices. The guerrilla doctrines' main disadvantage is the inability to access more advanced equipment due to economic, influence, and accessibility issues. They must rely on small unit tactics involving hit and run. This situation leads to low intensity warfare, asymmetrical warfare, and war amongst the people. The rules of Guerrilla warfare are to fight a little and then to retreat.

Propaganda is an ancient form of disinformation concerted with sending a set of messages aimed at influencing the opinions or behavior of large numbers of people. Instead of impartially providing information, propaganda in its most basic sense presents information in order to influence its audience. The most effective propaganda is often completely truthful, but some propaganda presents facts selectively to encourage a particular synthesis, or gives loaded messages in order to produce an emotional rather than rational response to the information presented. The desired result is a change of the cognitive narrative of the subject in the target audience.

Psychological warfare had its beginnings during the campaigns of Genghis Khan through the allowance of certain civilians of the nations, cities, and villages to flee said place, spreading terror and fear to neighboring principalities. Psychological actions have the primary purpose of influencing the opinions, emotions, attitudes, and behavior of hostile foreign groups in such a way as to support the achievement of national objectives.

Made possible by the widespread use of the electronic media during World War II, Information warfare is a kind of warfare where information and attacks on information and its system are used as a tool of warfare. Some examples of this type of warfare are electronic "sniffers" which disrupt international fund-transfer networks as well as the signals of television and radio stations. Jamming such signals can allow participants in the war to use the stations for a misinformation campaign.

Network-centric warfare is essentially a new military doctrine made possible by the Information Age. Weapons platforms, sensors, and command and control centers are being connected through high-speed communication networks. The doctrine is related to the Revolution in Military Affairs debate.

The overall network which enables this strategy in the United States military is called the Global Information Grid.

Space warfare is warfare that occurs outside the Earth's atmosphere. No wars have been fought here yet. The weapons would include orbital weaponry and space weapons. High value outer space targets would include satellites and weapon platforms. Notably no real weapons exist in space yet, though ground-to-space missiles have been successfully tested against target satellites. As of now, this is purely science fiction. 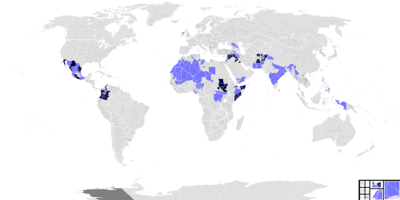