From Infogalactic: the planetary knowledge core
Jump to: navigation, search
For other uses, see Modoc. 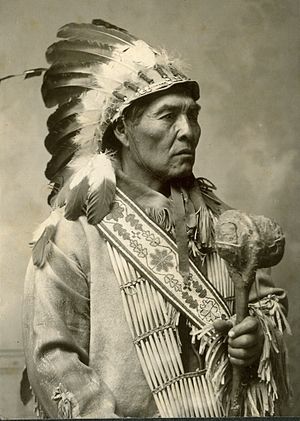 Photo of Modoc Yellow Hammer taken by Joseph Andrew Shuck before 1904. From the Lena Robitaille Collection at the Oklahoma Historical Society Photo Archives.

The Modoc are a Native American people who originally lived in the area which is now northeastern California and central Southern Oregon. They are currently divided between Oregon and Oklahoma and are enrolled in either of two federally recognized tribes, the Klamath Tribes in Oregon[2] and the Modoc Tribe of Oklahoma. 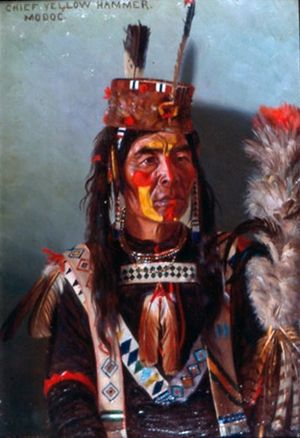 About 600 members of the tribe currently live in Klamath County, Oregon, in and around their ancestral homelands. This group included the Modoc who stayed on the reservation during the Modoc War, as well as the descendants of those who chose to return in 1909 to Oregon from Indian Territory in Oklahoma or Kansas. Since that time, many have followed the path of the Klamath.[3] The shared tribal government of the Klamath, Modoc and Yahooskin in Oregon is known as the Klamath Tribes.[4]

Two hundred Modoc live in Oklahoma on a small reservation in Ottawa County, Oklahoma, purchased for them by the federal government. Originally they were placed on the Quapaw Indian Reservation at the far northeast corner of Oklahoma. They are descendants of the band led by Captain Jack (Kintpuash) during the Modoc War. The Modoc Tribe of Oklahoma was officially recognized by the United States government in 1978, and their constitution was approved in 1991.[5]

Estimates for the pre-contact populations of most native groups in California have varied substantially. James Mooney put the aboriginal population of the Modoc at 400.[6] Alfred L. Kroeber estimated the Modoc population within California as 500 at the year 1770.[7] University of Oregon anthropologist Theodore Stern suggested that there had been a total of about 500 Modoc.[8] In 1846, the population may have included "perhaps 600 warriors (an overestimate, probably)".[9]

Prior to the 19th century, when European explorers first encountered the Modoc, like all Plateau Indians, they caught salmon during salmon runs and migrated seasonally to hunt and gather other food.[10] In winter, they built earthen dug-out lodges shaped like beehives, covered with sticks and plastered with mud, located near lake shores with reliable sources of seeds from aquatic wokas plants and fishing.[11]

In addition to the Klamath, with whom they shared a language and the Modoc Plateau, the groups neighboring the Modoc home were the following:

The known Modoc village sites are Agawesh, where Willow Creek enters Lower Klamath Lake, of the Gombatwa·s or Lower Klamath Lake People Band; Kumbat and Pashha on the shores of Tule Lake of the Pasganwa·s or Tule Lake People Band; and Wachamshwash and Nushalt-Hagak-ni on the Lost River of the Goġewa·s or Lower Lost River People Band.[8][10][12][13] The Modoc have also been known as the Modok (Brandt and Davis-Kimball xvi).

In the 1820s, Peter Skene Ogden, an explorer for the Hudson's Bay Company, established trade with the Klamath people to the north of the Modoc.[14]

Brothers Jesse and Lindsay Applegate, accompanied by 13 other white settlers, established the Applegate Trail, or South Emigrant Trail, in 1846. It connected a point on the Oregon Trail near Fort Hall, Idaho, and the Willamette Valley in western Oregon.[15] The new route was created to encourage European-Americans to come to western Oregon, and to eliminate the hazards encountered on the Columbia Route.[16] Since the British Hudson's Bay Company controlled the Columbia Route, development of an alternate route enabled migration even if there were trouble between the United States and the United Kingdom.[17] The Applegate brothers became the first known white people in present-day Lava Beds National Monument.[18]

The opening of the Applegate Trail appeared to bring the first regular contact between the Modoc and the European-American settlers, who had largely ignored their territory before.[19] Many of the events of the Modoc War took place along the trail.[20]

From 1846 to 1873, thousands of emigrants entered the Modoc territory. Beginning in 1847, the Modoc raided the invading emigrants on the Applegate Trail[21] under the leadership of Old Chief Schonchin.[9]

In September 1852, the Modoc destroyed an emigrant train at Bloody Point on the east shore of Tule Lake, killing all but three of the 65 persons in the party. The Modoc took two young girls as captives.[21][22] One or both of them may have been killed several years later by jealous Modoc women.[23] The only man to survive the attack made his way to Yreka, California. After hearing his news, Yreka settlers organized a militia under the leadership of Sheriff Charles McDermit, Jim Crosby, and Ben Wright. They went to the scene of the massacre to bury the dead and avenge their death. Crosby's party had one skirmish with a band of Modoc and returned to Yreka.[10][24][25]

Ben Wright and a small group stayed on to avenge the deaths. He was a notorious Indian hater.[26] Accounts differ as to what took place when Wright's party met the Modoc on the Lost River, but most agree that Wright planned to ambush them, which he did in November 1852. Wright and his forces attacked, killing approximately 40 Modoc, in what came to be known as the "Ben Wright Massacre."[23]

Historians have estimated that at least 300 emigrants and settlers were killed by the Modoc during the years 1846 to 1873. Perhaps as many Modoc were killed by settlers and slave traders.[citation needed]

Treaty with the United States 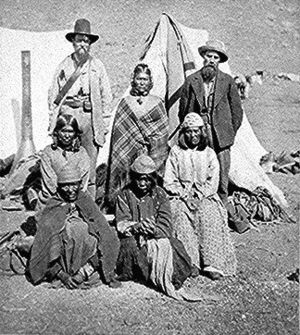 The United States, the Klamath, the Modoc, and the Yahooskin band of Snake tribes signed a treaty in 1864 that established the Klamath Reservation.[13] The treaty required the tribes to cede the land bounded on the north by the 44th parallel, on the west and south by the ridges of the Cascade Mountains, and on the east by lines touching Goose Lake and Henley Lake back up to the 44th parallel.[27]

In return, the United States was to make a lump sum payment of $35,000, and annual payments totaling $80,000 over 15 years,[10] as well as providing infrastructure and staff for a reservation. The treaty provided that if the Indians drank or stored intoxicating liquor on the reservation, the payments could be withheld and that the United States could locate additional tribes on the reservation in the future.[27] The tribes requested Lindsay Applegate as the US Indian agent.[citation needed]

The terms of the 1864 treaty demanded that the Modoc surrender their lands near Lost River, Tule Lake, and Lower Klamath Lake in exchange for lands in the Upper Klamath Valley.[10][28] They did so, under the leadership of Chief Schonchin.[29] The Indian agent estimated the total population of the three tribes at about 2,000 when the treaty was signed.[30]

The land of the reservation did not provide enough food for both the Klamath and the Modoc peoples. Illness and tension between the tribes increased. The Modoc requested a separate reservation closer to their ancestral home, but neither the federal nor the California governments would approve it.[10][31]

In 1870 Kintpuash (also called Captain Jack) led a band of Modoc to leave the reservation and return to their traditional homelands. They built a village near the Lost River. These Modoc had not been adequately represented in the treaty negotiations and wished to end the harassment by the Klamath on the reservation.[32] 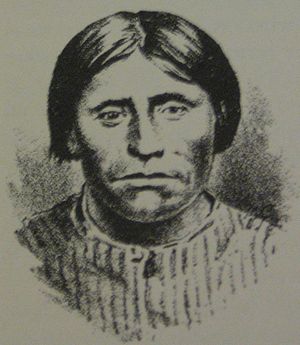 In November 1872, the U.S. Army was sent to Lost River to attempt to force Kintpuash's band back to the reservation. A battle broke out, and the Modoc escaped to what is called Captain Jack's Stronghold in what is now Lava Beds National Monument, California. The band of fewer than 53 warriors was able to hold off the 3,000 troops of the U.S. Army for several months, defeating them in combat several times. In April 1873, the Modoc left the Stronghold and began to splinter. Kintpuash and his group were the last to be captured on June 4, 1873, when they voluntarily gave themselves up. The U.S. government personnel had assured them that their people would be treated fairly and that the warriors would be allowed to live on their own land.[33]

The U.S. Army tried, convicted and executed Kintpuash and three of his warriors in October 1873 for the murder of Major General Edward Canby earlier that year at a parley. The general had violated agreements made with the Modoc. The Army sent the rest of the band to Oklahoma as prisoners of war with Scarfaced Charley as their chief. The tribe's spiritual leader, Curley Headed Doctor, also was forced to remove to Indian Territory.[33][34]

In the 1870s, Peter Cooper brought Indians to speak to Indian rights groups in eastern cities. One of the delegations was from the Modoc and Klamath tribes. In 1909, the group in Oklahoma was given permission, if they wished, to return to Oregon. Several people did, but most stayed at their new home.[35]

The original language of the Modoc and that of the Klamath, their neighbors to the north, were branches of the family of Plateau Penutian languages. The Klamath and Modoc languages together are sometimes referred to as Lutuamian languages. Both peoples called themselves maklaks, meaning "people".[36] To distinguish between the tribes, the Modoc called themselves Moatokni maklaks, from muat meaning "South".[37] The Achomawi, a band of the Pit River tribe, called them Lutuami, meaning "Lake Dwellers".[11]

The religion of the Modoc is not known in detail. The number five figured heavily in ritual, as in the Shuyuhalsh, a five-night dance rite of passage for adolescent girls. A sweat lodge was used for purification and mourning ceremonies.[38]